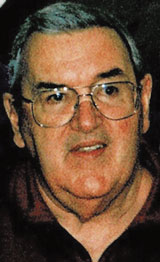 Kenneth (Ken) Fisher
1934-2019
At Prince Edward County Memorial Hospital on Friday, August 16th, 2019 at age 84. Ken is survived by his loving wife of 62 years, Barbara (The Wellings, Picton). Dear father of John (Cathy), Rick (Rhonda), Rob (Melissa). Loving grandfather of Allison, Stephanie (Jeff), Megan (Mike), James (Jessica), Carolyn, Crystal, Tanya, Kenny and great-grandpa to Aiden, Isaac and Noah. Ken was born on the Danforth in Toronto over his family’s dry-cleaning store. In 1962, he moved his family to Prince Edward County and never left. He lived in Bloomfield for 35 years and on the Ridge Road for 21 years. Ken immersed himself in his adopted County. He was a two-term municipal counsellor in Bloomfield, a past president of the Kinsmen Club of Picton and a long-time volunteer fireman with Bloomfield Fire Department. He was deeply involved with the Wellington Minor Hockey as a coach and manager. He loved all sports – golf, hockey, fishing, baseball. In his later years he enjoyed carpentry and making furniture and dollhouses for his grandchildren. Most of all he loved his family. A Graveside Ceremony will be held at Hicksite Cemetery at 1:30 on Friday August 23rd, 2019. We are going to miss him greatly – his clever witticisms, his bad puns, his devilish sense of humour, his ability to talk to everyone non-stop. I’m sure right now he’s bending God’s ear with some story or opinion. As expressions of sympathy, donations to the Prince Edward County Memorial Hospital Foundation would be appreciated. Arrangements entrusted to Ainsworth Funeral Home, 288 Noxon Avenue, Wellington. Online donations and condolences at www.ainsworthfuneralhome.com