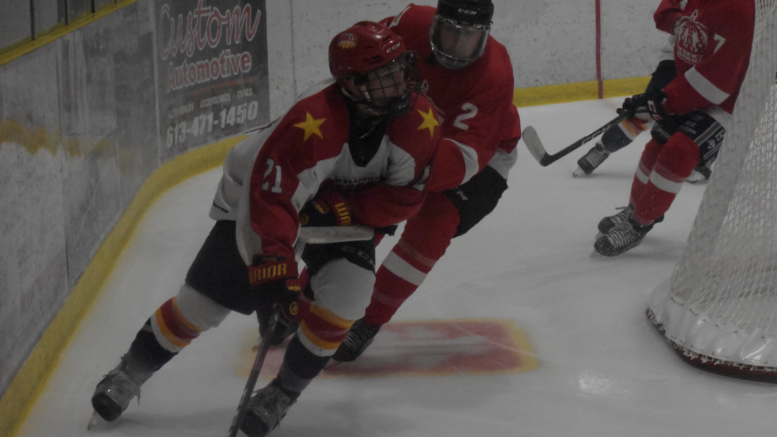 While it was a bit of a sputtering start to kick off the preseason, the Wellington Dukes appear to be rounding into form on the back stretch of the 2019 exhibition campaign.

After dropping a 5-1 decision  to the visiting Pembroke Lumber Kings on Wednesday evening to start of the warm up portion of the 2019-2020 Ontario Junior Hockey League season, the Dukes rebounded nicely, besting the Trenton Golden Hawks 6-3 on Friday night and then returning the favour to the Lumber Kings in Pembroke 5-2 on Sunday evening.

With a few more regulars and some solid goaltending, Wellington has looked every part the on-paper threat to lead the way in the OJHL’s East Division this season.

As so far as these types of determinations can be made at this stage of a training camp.

Dukes Head Coach Derek Smith said over the last two games, the organization has seen the fruits of the efforts of a busy recruitment season this summer.

“We’re starting to see the good pieces we have in camp coming together and starting to show how they can play as a team,” Smith told the Gazette.

The combination of size and skill is something a number of veteran Jr. A watchers have already noted.

Smith added the work displayed so far by net minders Matt Kealey and Kyle Renaud have also been bright spots.

“This time of year is tough with Major Junior training camps just getting started but we’ve been very happy so far with Kyle and Matt,” Smith added.

On Sunday, Wellington got goals from both known and lesser known sources. 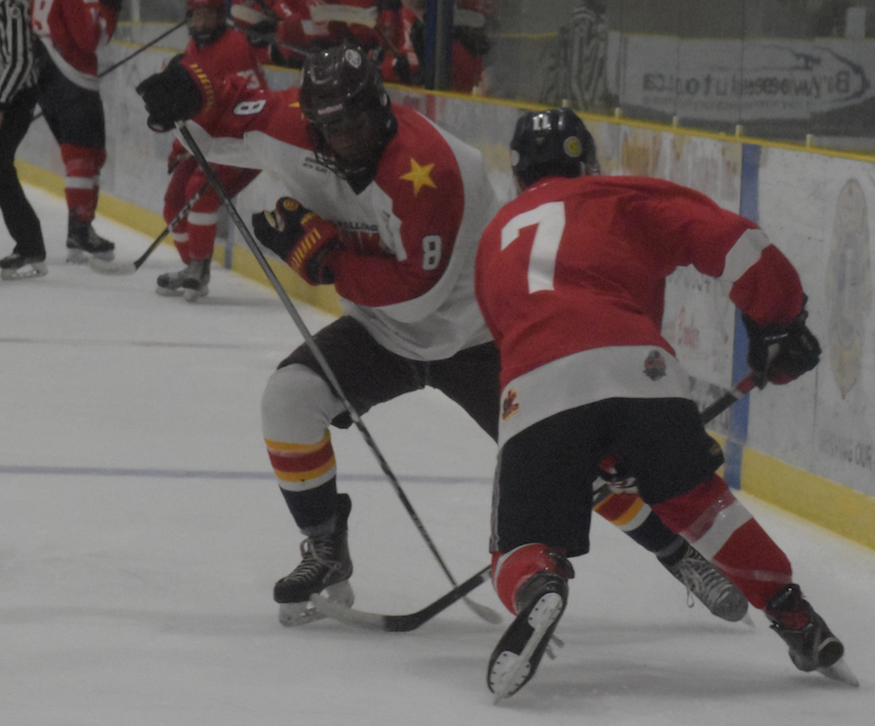 After Wellington surrendered an early power play goal off the stick of Lumber King Nick Guillemette, the club came back on the hosts with a power play marker of their own as Frank Vitucci found Evan Miller at 4:18 to tie the contest at 1-1.

Miller continued his hot play a game after firing home a hat trick in the win over visiting Trenton on Friday.

Vitucci would continue to have himself a great period, beating Pembroke’s Darian McTavish twice, once on the power play at 12:27 and again at even strength at 16:16.

Andrew Poulias would get Pembroke to within a goal 43 seconds into the second but that was as close as the hosts would get as Wellington netminder Kyle Renaud was spot on the rest of the way, stopping 19 of 21 Lumber Kings volleys.

Wellington was more than equal to the task Sunday night at the Pembroke Community Centre as they sent 45 shots to the Lumber King goal.

Native Nova Scotian Tanner Tolliver would bag his first two goals of the preseason, firing one past McTavish at 9:32 of the second and then converting a Derek Vos feed at the 12:24 mark of the third.

The game got chippy towards the end of the contest with a everything but a full scale line brawl erupting at the 16:22 mark of the final stanza.

Vitucci, Brett Humberstone, Dylan Massie and Jake Gagnon were all sent to the showers early with double minors for roughing.

Smith said he was happy with the physical response from the players when the the game got physical.

“We showed them and everyone else that we aren’t going to be pushed around,” Smith said. “We laid some big hits and I thought we answered the bell when the game turned.”

On Friday night, Wellington met up with a Trenton squad which was playing its third preseason game but the Dukes looked much sharper in a 6-3 victory.

Miller, Dan Panetta and Ben Woodhouse  would all beat former Whitby Fury netminder Oliver Troop in the first to push the Dukes ahead 3-0 after 20 minutes.

The Golden Hawks would get on the board with a Dylan McMahon power play goal at 2:35 of the second but the Dukes reestablished the three goal cushion just over three minutes later as Vitucci dug the puck out from underneath Troop and knifed it into the Trenton net to make it 4-1.

The clubs traded goals in the third.

Trenton might have had designs of a late game comeback and a pair of tallies that beat Wellington starter Matt Kealey made the contest much closer that it appeared.

But the Dukes got the last laugh as Miller made a splash in his first game as a Duke, potting Wellington’s second power play goal of the period in the final minute of the game to finalize the score at 6-3.

Smith said both Miller and Tolliver were identified at a showcase tortunament Wellington took part in this summer but both players have shown up to Wellington in even better shape since that initial introduction.

“”They’ve shown great commitment by having really good off season work out plans,” Smith added. “Miller’s a tremendous playmaker and he’s showing that nose for the net while Tolliver is great when he’s playing his game in straight lines and getting in on the forecheck.”

Smith also praised the effort thus far of 6’4″ Escanaba, MI native Colton Hayes who has done gangbusters work below the goal line and along the board for Wellington.

Scoring details for Wednesday’s 5-1 loss were not made available however it was Dawson Eills setting up Brian Bygrave midway through the second period to get Wellington to within a goal at 2-1.

Three power play goals from that point,  however, left the Dukes without much recourse.

Wellington heads to Cobourg Wednesday night for a preseason match up with the Cougars before wrapping up their preseason with return match with the Golden Hawks in Trenton.

The Dukes kick off their season Fri,, Sept. 6 against the Brampton Admirals.