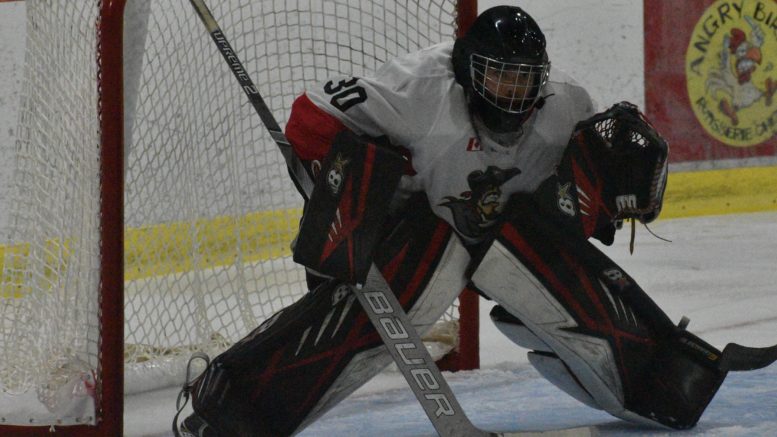 Surrendering two goals in the opening minutes of periods one and two did nothing to help the Picton Pirates in their first exhibition game of the 2019 preseason but their coach believes the club was able to compete stride for stride with the host North Kawartha Knights Sunday evening.

The Pirates gave up goals to Matthew Willbee at the :31 and :38 marks of the first and second periods, respectively, to help the host North Kawartha club who compete in the Orr Division of the Provincial Junior Hockey League to a 2-0 lead.

The Knights made it 3-0 thanks to a Spencer Ryan goal at the 6:16 mark but, despite 38-14 through 40 minutes, the Pirates were able to batten down the hatches and start acclimating themselves to PJHL hockey.

“I thought we developed into a very hard nosed and hard working group as the game wore one and once we were able to shake off the rust and get our legs moving in the third, we were right there with them,” Pirates bench boss Tyler Green told the Gazette Monday.

The locals would win the third period by virtue of the frame’s only tally.

Matt Poole would convert a Kurtis Wood feed with help from Nick Kirby just 46 seconds into the third to give Picton a shot of energy and make it a 3-1 contest.

The Pirates would come close to cutting into the Knights two goal margin but couldn’t manage to beat North Kawartha’s Noah Miller.

Green said he was impressed by a number of potential Pirates including Wellington native Cole Lavender who could wind up being Picton’s 16-year-old player this season.

“He was able to jump into the lineup and do a lot of nice things while providing a physical presence which is always nice to see,” Green added. “He certainly came as advertised.”

Brennan Bush went the distance for Picton in net and was outstanding in his 60 minutes, making 42 stops.

The Tweed native is still very much in position to take a spot at the Trenton Golden Hawks camp but both Picton and the Ontario Junior Hockey League club felt Bush would benefit from a PJHL exhibition game against one of the better Orr Division clubs.

“We haven’t seen him this summer but he impressed us greatly,” Green said. “His positioning and control was really sound. You can tell he’s been working hard this off season to try and get better.”

Picton will host the Gananoque Islanders on Thursday night at LeHigh Arena in Wellington.