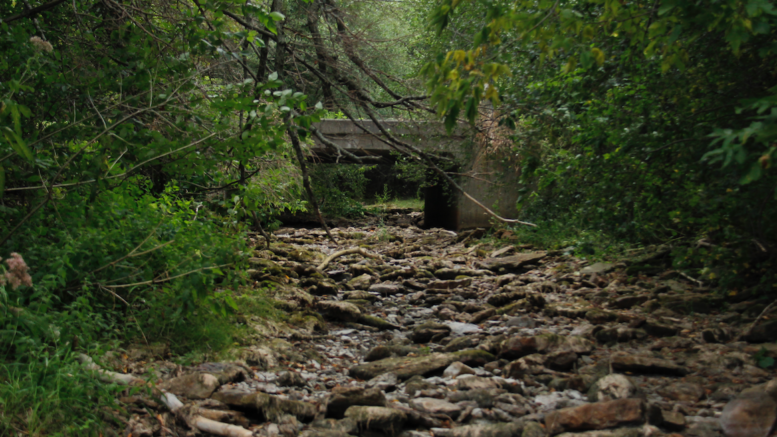 COMING UP DRY- Despite high lake and bay levels, water sources are under stress due to a lack of precipitation this summer, forcing Quinte Conservation to declare a Level One Low Water condition. (Desirée Decoste/Gazette Staff)

A Level 1 Low Water Condition has been issued for the Quinte Conservation Watershed including the regions of the Moria, Napanee and Salmon Rivers as well as all of Prince Edward County.

Despite high water levels on the Bay of Quinte and Lake Ontario, minimal precipitation throughout the last few months has contributed to lower than average groundwater and surface water conditions through out the watershed.

Water shortages can be caused by a number of different things including human activities, increased usage and climate conditions. Often water shortages are the result of too little precipitation over an extended period of time, usually a season or more.

Other climatic factors such as higher-than-normal temperatures, high winds and low humidity can exacerbate the situation.

“Groundwater and surface water conditions are lower than average for this time of year,” Quinte Conservation Watershed Monitoring Coordinator Lynette Lambert said. “If limited rain is received or if dry conditions persist, we will see water levels in streams, rivers, and in groundwater continue to decline.”

Ground water levels are usually highest during April, as a result of precipitation, and then gradually decline until late September or October.

Low water conditions are ranked as Level One, Two or Three based on a prolonged period of low flows or precipitation. Level One is the least severe and Level Three is the most severe.

A Level One Low Water Condition means the potential for water supply problems have been identified and are managed through existing programs of Conservation Authorities, municipalities and other key provincial agencies. A 10 per cent reduction in water consumption is requested.

“We are asking residents and businesses of the region to voluntarily reduce water usage by 10 per cent for non-essential uses until the supply is replenished,” Lambert stated. “This includes taking shorter showers, turning the tap off to wash dishes and brush teeth, and watering plants at night and when possible, using rain barrel water to do so.”

A Level three indicates a failure of the water supply to meet demand and restrictions on water use may be imposed as well as a 30 per cent reduction in water consumption is requested.

The Ontario Low Water Response (OLWR) was produced to ensure the province is prepared in case of low water conditions. It’s intended to ensure provincial preparedness, to assist in coordination and to support local response in the event of a drought. This plan is based on existing legislation and regulations and builds on existing relationships between the province and local government bodies.

Quinte Conservation is the lead for the local Water Response Team (WRT) and that group forms when the watershed is in a Level One Condition.

This Low Water Condition message will be in effect, or updated before, Thurs., Sept. 5, 2019.

Quinte Conservation encourages residents experiencing low water to report their conditions using an online form located at https://arcg.is/1zX8b5 or on the main page of their website along with tips for water conservation at www.QuinteConservation.ca