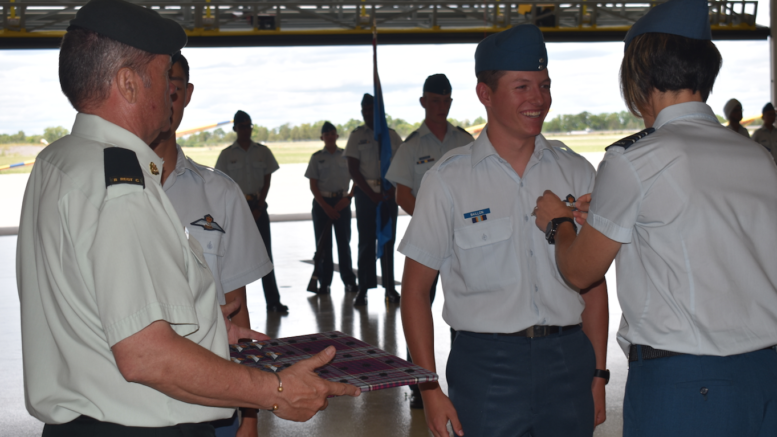 UP AND AWAY - Cadet Owen Baillon receives his wings from LCol Baldasaro. (Sarah Williams/Gazette Staff)

The annual Wing’s Parade was held at Canadian Forces Detachment Mountain View Friday. The ceremony marks the graduation of yet another league of Cadets from the Glider Pilot Scholarship Course and the Cadet Flying Training Centre.

The event is also a landmark of the end of summer in Prince Edward County.

After a season of soaring gliders in the skies over Picton and Mountain View, the iconic yellow trainers will be put away until the summer of 2020.

This year, the reviewing officer was Lieutenant Colonel Dianne Baldasaro. Baldasaro is the Commanding Officer of 437 Transport Squadron at CFB Trenton. The search and rescue pilot, with several tactical airlift missions and tours of Afghanistan under her belt, joined CFB Trenton last summer.

After taking to the podium and introducing herself, Baldasaro directed her speech to the Cadets on parade, asking, “How many of you have not got your driver’s license?”

Close to half of the 60 cadets present raised their hands.

“Well done to you,” enthused Baldasaro, “Driving a car, just so you’re aware, is a little bit different than flying a glider,” she said with a chuckle.

“Today is a special day,” she continued. “it marks a change in your perspective. When some of you continue to further your pilot life, you’ll gain further appreciation of the unique vantage point and views that will stimulate great thoughts about the world and your life. Today, you can talk a new language.”

After reminiscing about her stint as a Cadet, Baldasaro commended the program for having continued relevance for those involved, imparting valuable skills and knowledge.

“The Cadet Program has endured. It’s an amazing program that not only gives you opportunities like this but also gives you skills for life that you don’t even really know about yet. You don’t yet know how rich your opportunity is here and how that will affect your move into the future in your jobs and life,” said Baldasaro.

“The most effective way to do it, is just do it,” she encouraged. Having borrowed that phrase from famed pilot Amelia Earhart, she implored the Cadets to act with confidence at future junctures in their life.

“It’s one flight at a time and it’s one choice at a time,” she added.

After the awards and speeches, the Cadets departed the Hangar as pilots. Many joined family members in celebration on the tarmac. 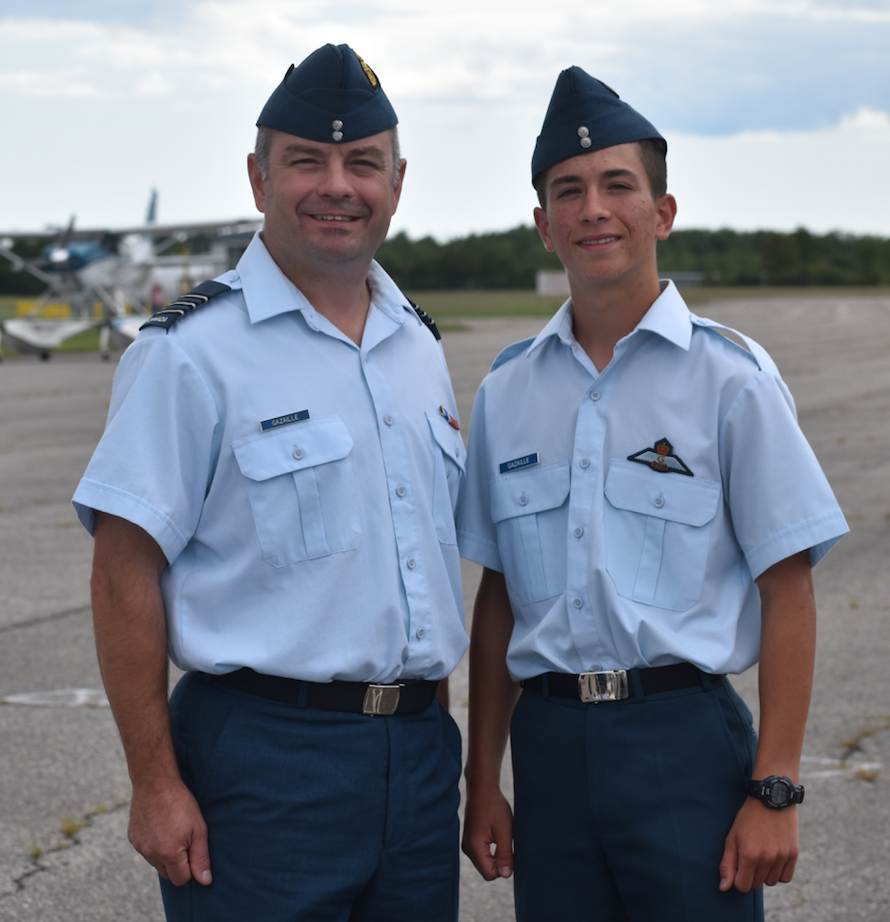 One such family included Sylvain and Tristan Gazaille. They are testament to the enduring relevance of the Royal Canadian Air Cadet program and the value therein

Sylvain explains that his involvement with Cadets began when he was posted to Winnipeg, directly following his graduation from the Royal Military College. There, he was a Liaison Officer at a local Squadron for two years. Now, having been in Trenton for three years, Gazaille supports the 704 Squadron as part of the parent committee as well as part of the officer corp.

“The parent committee is responsible for raising funds to support the squadron as well as coordinating some of the activities,” Sylvain explained.

In his current military functions, Gazaille is responsible for Level Five cadets and also volunteers his time supporting the orienteering team.

“I am a super proud sad, not only for my son but all Cadets who flourish, having gone through the Cadet Program,” said Sylvain.

Gazaille further describes his son as being proof that the cadets program is successful for many.

“Cadets has changed my life by allowing me to better myself and the people around me. Before joining, I was the quiet kid who preferred to study alone. Cadets gave me the courage to find my voice,” Tristan told the Gazette.

In the future, Tristan Gazaille hopes to join the Canadian Forces and become a cardiologist.

“Although I do not plan to become a pilot, the skills I have learned in Cadets will help me in the future. The discipline I have developed with the long nights of drill will allow me to work well with anyone. The long and fulfilling seven weeks I spent learning how to fly gliders will help reassure me that I can work through any challenges in life as long as I believe in myself and persevere,” Tristan added.