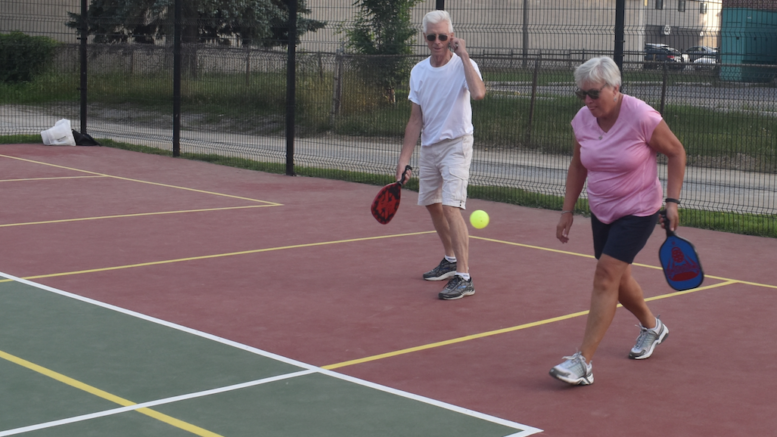 The Picton Recreation Committee (PRC) has added a new venture to the list of activities and events they provide for residents of the Picton area.

As of July, a sub-committee has been created and the Picton Pickleball Club had been formed for residents of Picton and beyond.

What is Pickleball you ask?

Well to begin with, it’s the fastest growing sport in North America for adults over the age of 50. It’s a game that is described as  a combination of tennis, badminton and ping pong all rolled into one.

The PRC has been offering Pickleball during the winter months at PECI for many years, but until late June of this year, the club did not have any local options for outdoor play. Recently, the newly refurbished tennis court at Benson Park in Picton has had pickleball lines added.

The PRC had already been working towards the creation of a Pickleball Club and finally, with a place to play outdoors, the club focussed on summertime pickleball was started.

Club membership includes both those who have been playing for a while as well as novices of the game. As Club member’s skill levels increase, there will be more competitive games for those so inclined but generally, the focus will be on fun and fitness.

Anyone with an interest can join.

The Picton Pickleball Club is run by a team of volunteers taking on roles of Chair, Secretary, Treasurer and Equipment Manager. The cost to join the Club for the remainder of this outdoor season is just $5. The Club plays at Benson Park on Monday evenings beginning at 5:30 pm until 8:30 pm and also on Wednesday mornings from 9:30 a.m. to noon.

As a lot of the Picton Pickleball Club members head south for the winter, the Picton Recreation Committee will continue to offer pickleball at PECI from October to the end of April on Thursday evenings, at a cost of $3 each night or $15 for a 3-month term.

Anyone wanting to join the Picton Pickleball Club can contact the Secretary Ilona Anderson at Ilonabill@gmail.com