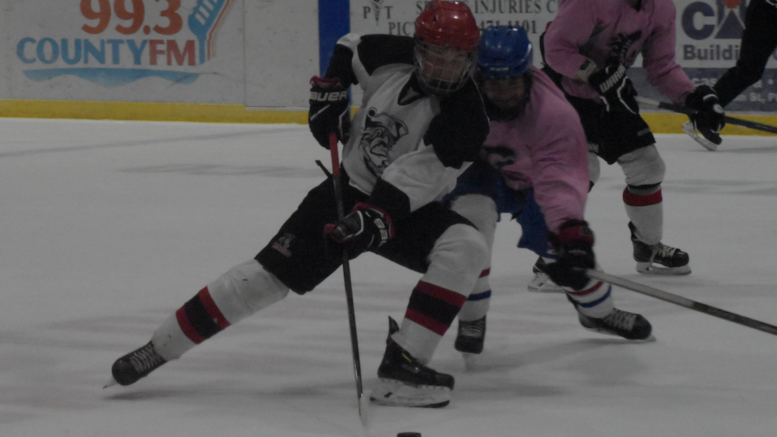 ON THE MOVE- Pirates defenceman Cooper Rogers tries a backhand while being checked by a Gananoque Islanders during the first period of a 5-1 win for Picton at Lehigh Arena on Thursday night. (Jason Parks/Gazette Staff)

With a very familiar face in the opposing line up Thursday night, the Picton Pirates picked up their first win of the 2019 Provincial Junior Hockey League exhibition season and then announced a number of deals and signings throughout the weekend.

Former Pirates captain Devin Morrison was in the lineup for the Gananoque Islanders on Thursday night at Lehigh Arena but didn’t land on the score sheet as the locals skated past the visitors 5-1.

The player Morrisson was traded for, Khaden Henry, opened the scoring for Picton in the first period with a power play tally at the 12:49 mark of the first, using time and space to walk to the high slot and rip a wrist shot past Gananoque starter Jeremy Piazzi. 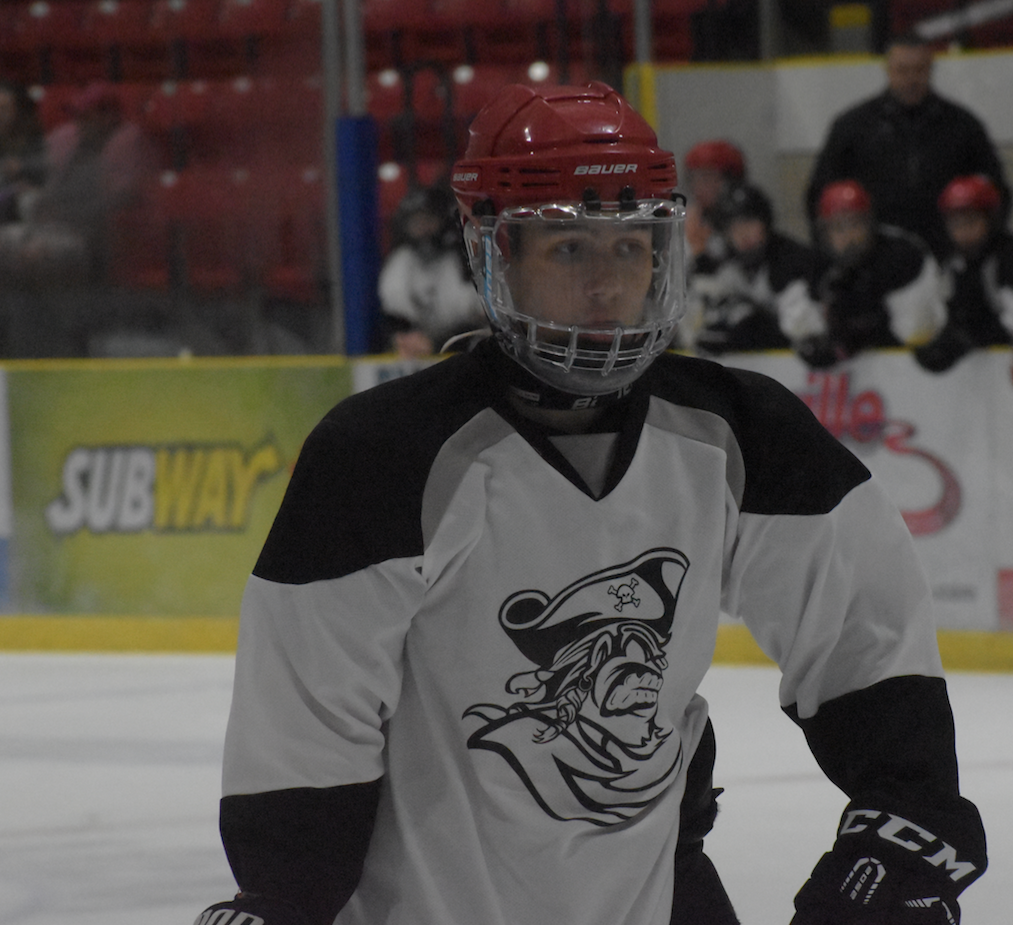 Scoring the only goal of the first, Picton doubled their lead in the second when Brayden Adams drove to the Islander net and knifed a puck past a sprawling Piazzi just 3:45 into the frame.

Just 32 seconds into the final stanza, Nick Kirby would extend the Pirates lead to 3-0 with an unassisted effort.

The only bright spot for the visitors game in the later half of the frame as Evan Jamieson would get the Isles on the board at 12:50 but Kirby would feed club captain Will Harrison just seven seconds later to restore the three goal margin at 4-1.

With Piazzi lifted for an extra attacker in the late stages, defenceman Nick Kyte would dial long distance at 18:44 to make it a 5-1 final.

All in all, a solid effort for an organization that is slowly solidifying itself

At the start of training camp about just over two weeks ago, the picture of as to what the 2019-20 club might look like was akin to autostereogram.

But, in a couple of weeks time, Pirates General Manager Chris Masterson has been able to swing a couple of deals, make a few signings and much like that 3-D art fad of the 1990’s, the picture is slowly revealing itself.

“We feel a lot better than where we were at the start of camp, that’s for sure,” Masterson  told the Gazette Monday.

Morrison, who was considering making the jump to Jr. A in eastern Ontario, instead chose to attend Queen’s University this fall and asked to be traded to a Tod division club so he could more easily balance studies and hockey.

“We knew that Devin wanted to move closer to Queen’s so we tried to accommodate him and make the best possible deal we could for the organization,” Masterson said.

Morrison netted Henry, 17,  and a substantial player development fee from the Gananoque organization and the GM said that while the club was never going to replace its team captain and both the skill and intangibles the Belleville native brought to the Picton lineup on a nightly basis, the club was thrilled to get Henry.

“He has tons of skill and was second to (Kirby) last season in points on the Quinte AAA midget team,” Masterson added. 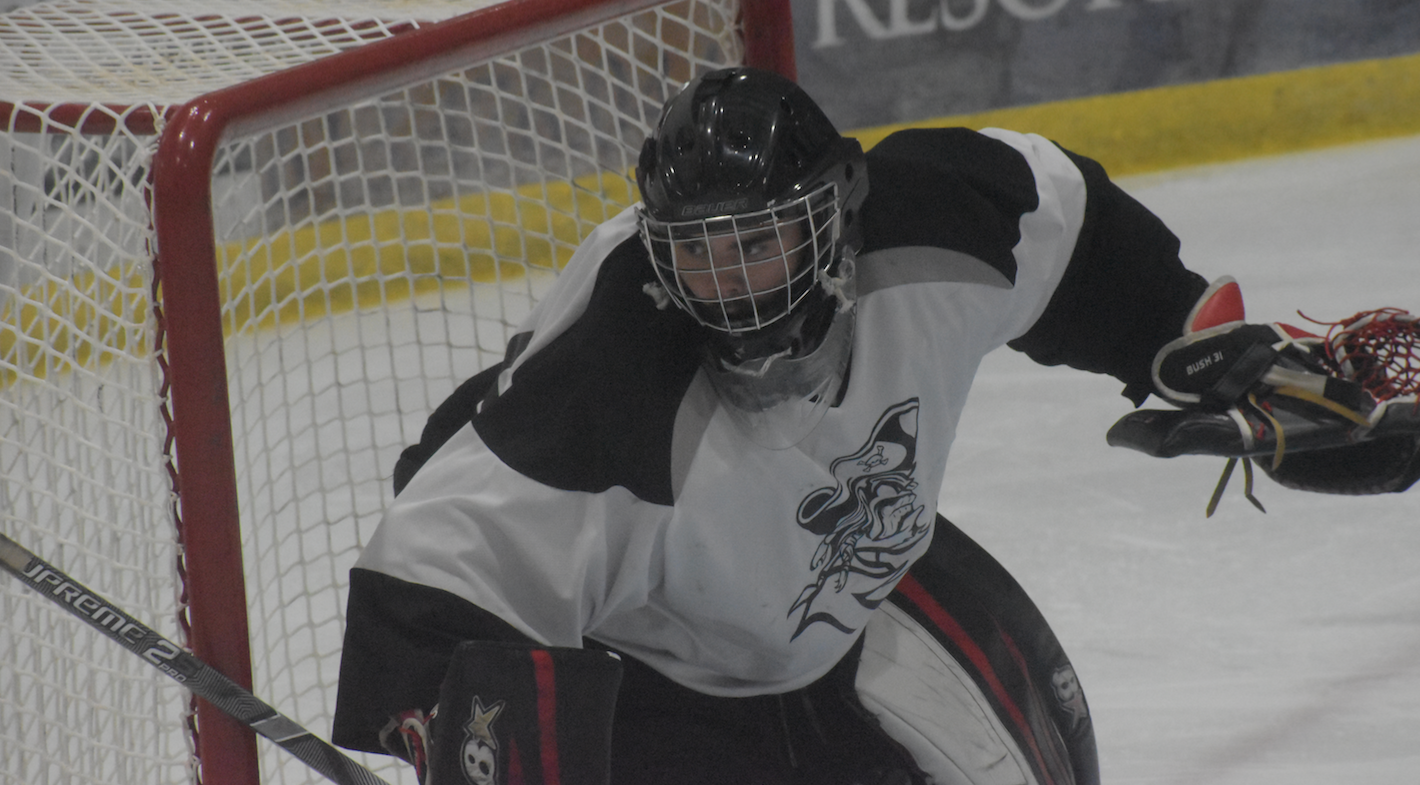 Getting Henry was a boon for Picton show had their hand forced with a couple of movement requests late in the offseason.

Picton announced this weekend that veterans Justin Arnold and Logan White had been traded for player development fees to other PJHL clubs.

Arnold, a County native, took late acceptance to post-secondary studies in the Peterborough area and was sent off to the North Kawartha Knights.

In terms of White, the Napanee native asked to be traded to his home town Raiders and, in both cases, the Pirates agreed to terms with both clubs.

Certainly Justin would have been our top line centre so it was a bit of shock to be sure but we wish him the best in his schooling,” Masterson added.

The hard nosed grinder has 68 PJHL games to his credit over the last three seasons between Campbellford and Port Hope.

“Mike wasn’t sure if he was coming back to play in the league this season but he attended our skates and really likes the atmosphere in organization,” the GM added.

In net, the GM was enthused by Bush’s second quality outing on Thursday night. 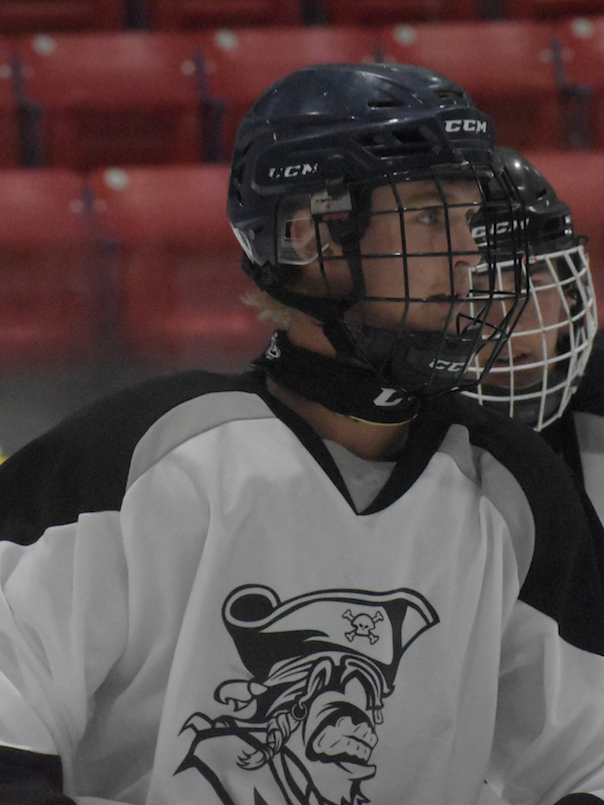 “He’s in shape, ready to go and We’ve been really impressed so far,” Masterson said.

Picton was also able to add a second netminder via trade, landing the rights to 19-year-old Kingston-area native Eric Tessier from the Richmond Royals of the second tier Central Canadian Hockey League 2 loop

Tessier played has appeared in 43 CCHL2 games over the last two seasons between Westport and Richmond.

On the back end, Picton has picked up a pair of blue liners and the defensive corps might be the Pirates greatest strength heading into the 2019-2020 season.

Wellington native Cole Lavender has committed to play his 16-year-old season with the Bucs and Picton has also wound up attracting 17-year-old Hamilton-area native Jacob Dietz to the program.

Both players were outstanding at the Wellington Dukes training camp and provide the Pirates with a strong, young and mobile pair of rangy defenders.

“We love what Lavender brings to the lineup every night and Dietz expressed a lot of interest to stick around the County and AP with Wellington from our organization,” Masterson said. “We have the physical and veteran presence of Kurtis Wood and Nick Kyte and (Picton native) Cooper Rogers has physically developed very well over the summer and is already showing what he will be able to do with more experience in his second year. Defensively, we will be a team that plays good, hard-nosed hockey in our own end in order to win and that’s what we saw on Thursday night.”

While it might be offence by committee this season, the team will get a good shot in the arm later this fall when Nate Boomhower returns to the lineup after off-season shoulder surgery.

Picton is in Gananoque on Wednesday night for a return game with the Islanders and then wraps up the 2019 preseason at LeHigh Arena on Sunday afternoon with a 4:25 puck drop against the Knights.