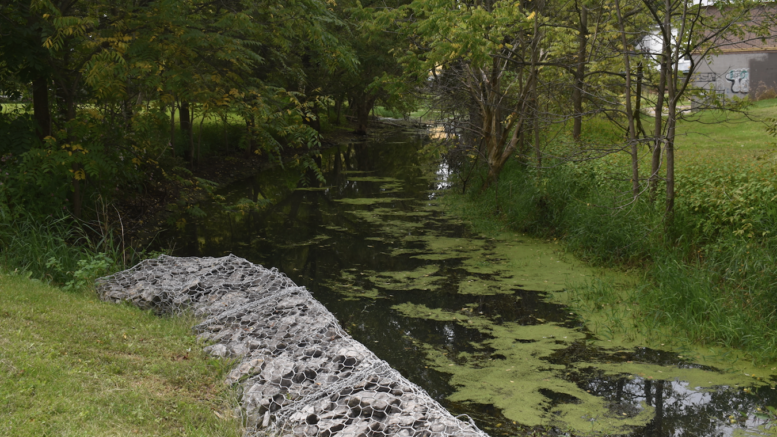 Smith is part of a group of concerned citizens who live on East Mary Street and whose properties have been affected by a considerable overspill of water from the adjacent Marsh creek. Though many have experienced adverse effects of flooding in recent years, Smith and her neighbours argue that the water levels on their street are exacerbated by infrastructure problems.

Smith describes a neighbourhood that works hard to maintain their respective properties and, up until 2017, did not experience any flooding.

“We clean the ditch of leaves and debris in the spring and fall and we mow the side of the levee once or twice a week from May until October,” stated Smith.

For those who don’t know, there has long been a creek flowing behind East Mary. And, as Smith describes, this creek, along with the green space it provides, has been an integral part of life on that street.

Storm water runs west to east through a ditch that drains into Marsh Creek via a culvert behind 5 East Mary Street, Smith explains. The ditch works to drain water into the creek and from there, into Picton Harbour.

“Starting late April or early May, water from the harbour flows up the creek but it doesn’t go further upstream to catchment ponds or wetlands in Delhi Park or Glenwood Cemetery, as you might expect,” stated Smith. “Instead, water is diverted into the open check valve, through a culvert and into our yards.”

Smith believes the issue boils down to an issue with infrastructure. That includes the installation of a culvert-which Smith purports was unnecessary- subsequent degradation to the levee that keeps the creek at bay and what Smith describes as a “mystery pipe”.

“A few years ago, water started pooling in the yard behind the mini plaza on Bridge Street. It was deemed to be ground water and a culvert was installed to drain the water into the creek. It turned out the water had actually come from a water main break and the culvert was unnecessary,” argued Smith.

The implications of the flooding are far-reaching and affects every creekside property. Problems range from breathing issues, headaches and flu-like symptoms, to loss of trees and gardens. Properties will likely have depreciated due to the water issues as well.

Anita Davis, another resident of East Mary, also spoke to the issue, saying she witnessed water flowing over the creek bank and yards become inundated with water. Davis even witnessed fish, ducks and other aquatic wildlife inhabiting resident’s yards.

The physical and emotional toll of the flooding on East Mary is considerable, based on the evidence provided in Smith’s deputation.

Smith’s remedial solution is multifold. As she explains, the culvert must be removed. The levee must also be restored and, finally, valves on both sides of the creek need to be replaced and/or repaired.

Furthermore, Smith added that staff at Quinte Conservation have indicated that a drainage plan for the Picton Harbour will not address the current issue of water overflow and, in any case, a drainage plan is not slated for approval or completion in time to prevent the probable flooding next year.

Councillor Brad Nieman put forward a motion to refer this issue to staff to investigate and follow-up with a report.

“Flooding is the new normal and this is going to be an ongoing problem. Some of the concerns raised need to be looked at,” said Nieman.

Councillor Phil St. Jean seconded the motion, adding that he has personally explored the area and seen the devastation first-hand.

Though St. Jean asserted there is little council can do to remedy the high-water problem itself, he believes a report would be the next natural step towards remediation of the East Mary Street neighbourhood.

“To further inform everyone, from what I saw, the levee is degraded and that’s what is causing the majority of the flooding on the municipal property that’s abutting all of the properties. To me, that’s a simple fix,” stated St. Jean.

The staff report is expected to return to Shire Hall in October.