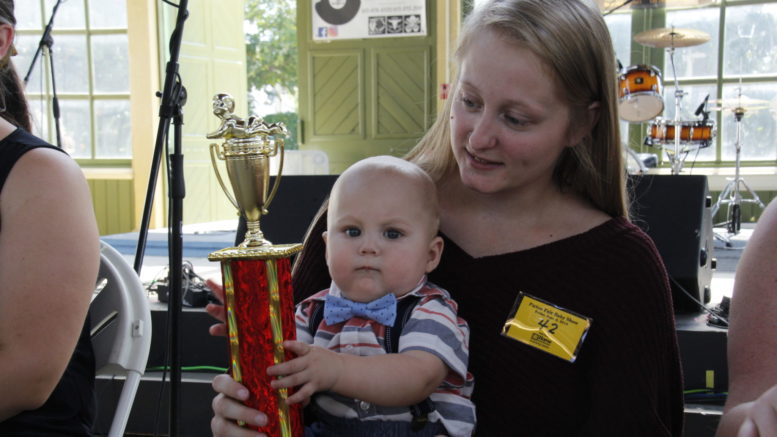 IT TAKES ONE TO KNOW ONE- Little Maverick Heffernan pulled out all the stops and won the hearts of the judges at the 2019 Picton Home Hardware Baby Show at the Picton Fair on Friday afternoon. Winning must run in the genes as mom Summer Townsend was herself a winner at the annual show when she was an infant. (Desirée Decoste/Gazette Staff)

The rides were roaring, the animals were calling and smiles were as wide as a bright, blue September sky as the Prince Edward Agricultural Society’s annual Picton Fair offered up its 184th edition this weekend.

While final tallies were still being determined as of Monday, Fair organizers figure upwards of 10,000 people were in attendance over the course of the weekend and the final tally will indicate a higher number of fair-goers over 2018. Whether it was the ever-popular midway, the live entertainment, the wrestling show, the demolition derby, the exhibits featuring everything from food to photos, the animal shows, or a sampling of all of the above, there was something for everyone at the Fairgrounds this weekend.

The Crystal Palace hosted the adorable Picton Home Hardware Baby Show on Fri. with 56 babies getting in on the action and showing off their sweet nature.

Second runner up was Leita Vaughan with mom Season Vaughan, who was in the 4-6 month old category and showed off her adorable baby pink head band and cute purple butterfly dress.

Right from Heffernan’s birth, Townsend was told of how cute of a baby he was. Townsend, a former winner at the baby show,  was a baby thought “Why not?”

“We thought it would be a great memory and great for our keepsake box we’re putting together for him,” Townsend expressed. “I was very surprised in the end because he was up against such tiny adorable newborns but I think he did all the work himself winning the judges over.”

After the baby show The Crystal Palace was home to music the rest of the weekend with bands such as The Reasons and the Hank Williams Jr. Tribute but the weekend show stopper had to be the appearance of The Wilkinsons. In terms of this year’s exhibits,  exhibitors displayed their art forms as such things as cookies and baked goods, flowers, crocheting, painting, pictures, fruits and vegetables and more.

“We had a lot more youth and children participating this year so we had to find room to put them all up,” Ag. Society President Susan Jones said. “It’s great to see the community involved and taking part in the fair.

Friday evening brought some dreary weather to the fairgrounds which hampered attendance slightly but never stopped people from enjoying all the festivities such as the tractor pull, the dairy cattle show and The Reasons performance at the Crystal Palace.

“In some cases I think people come to the Fair because it’s a tradition,” said Jones. “I like it because it’s where I live and I like to see everyone come together and join together to make a great Fair.” Saturday brought some wet weather as well but the overcast conditions were short lived and gave way to beautiful sun and a nice early fall breeze for fair attendees and vendors alike to enjoy festivities such as the Pet Valu Mutt “Dog” show, mini horse show, 4H calf show and much, much more.

“Since I was 12-years-old I have been coming to the fair and I come out every year,” said Monty Kellar, 53 year fair attendee. “Back in my public school years we had to march from the outskirts of Picton to the fair grounds in dress clothes. The only good part about it was we didn’t have to pay to get in!”

Saturday evening at the Curling Club was the place to be as some “rougher” excitement was brought in. The crowd inside gathered around the ring (as close as they were allowed to) to prepare for some classic wrestling excitement.

Among attractions, shows and vendors at the fair, Quinte Lasertag, Warriors Axe Throwing, pictures with Winnie The Pooh and Scooby Doo, Ellis Taffy, mini hydro plane boats on display, a chainsaw carver and many, many more.

The Mini Donut truck was one of the main food stops at the fair and some admitted to attend the fair just for them.

“I’ve been going to the fair for as long as I can remember and I’m 20 now,” said Townsend. “My favorite part of the fair is the food and the petting zoo. I love animals and seeing Maverick interact with them and the mini donuts are the best but the fairs are the only places you can get them.”

Sunday brought the most excitement to the Grandstands with the annual demolition derby.

As has been the standard for many years, a capacity crowd cheered heartedly for their favourite drivers and a chance to witness motor vehicle mayhem.

“Being the President of the society is a lot of work,” Jones stated. “I couldn’t do it without my secretary who is fantastic and all our amazing and hard working volunteers.”

If you are interested in volunteering for the 185th annual Picton Fair please contact the fair board and they’ll invite you to one of their meetings.