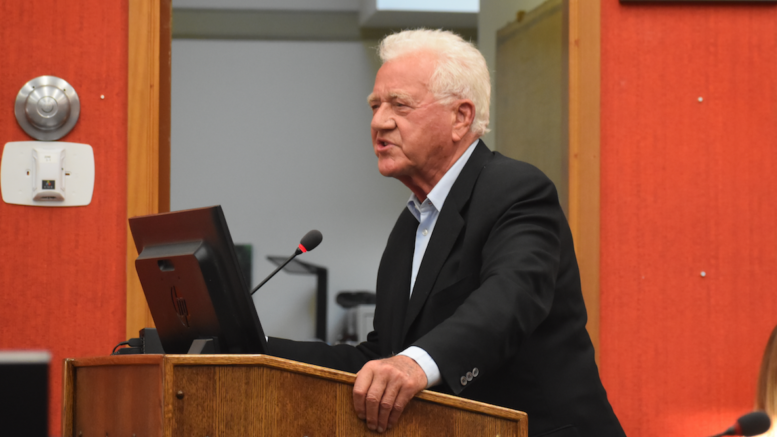 Canadian business mogul Frank Stronach offered his vision of a 10,000 square foot beef processing facility in the south end of Prince Edward County  to the Prince Edward County Agriculture Advisory Committee on Wednesday evening. The proposed facility would be situated in South Marysburgh but the scale of Stronach’s vision is raising some eyebrows as well as environmental concerns.

Having a swathe of sundry business ventures under his belt, from an organic cattle ranch in Florida to various racetracks throughout North America, Stronach, 87,  presented his plan to the committee with the intent of gauging community interest for the facility in question.

Stronach described his journey to agriculture as a way to “do the right thing”. To that end, and throughout his deputation, he stressed the desire to produce foods without chemicals.

“Small farmers cannot compete with the industrial farms, so the message I want to get across is ‘food is the future.’ Especially, specialized organic foods etc., because we already have a lot of industrial farms,” Stronach stated.

With this in mind, the facility proposed by Stronach would be considerably smaller than that in Florida.

However, like his operation in Florida, the processing facility in the County would focus on the humane treatment of animals.

Stronach also emphasized that farmers “don’t have to rush in.” Furthermore, he asserted that everything they do at the Florida facility is transparent and traceable, with visiting hours once a week for interested members of the public.

“Together, we can build something and it will be good. The food is the future,” stated Stronach.

With an emphasis on no pain for the animals, Stronach consulted with well-known livestock consultant and animal welfare advocate, Temple Grandin, to design the meat processing facility with the “pain free” principle in mind.

“Animals are subservient to mankind, but that doesn’t mean we have to be cruel. The way the business normally works is you have a middle man who brings trucks of cattle to feed lots nearby processing plants. If you’ve ever seen stuff like that, when you hear the cry of the animals, they know. It’s very barbaric. Our number one principle is no pain to the animals, no stress, no hormones, no GMO foods, and organic foods,” said Stronach.

Stronach’s apparent plan is to start small as it will take time to raise cattle organically. He intends to start with processing about 10 cattle per week and, someday, reaching 100 cattle per week. Eventually, Stronach hopes to have an organic supermarket chain and restaurant tied to his beef processing facility.

“I believe factories should not be that large, where people get lost and become a number,” said Stronach.

Naturally, for beef to be considered organic, the cattle must be fed organic feed. Ag. Committee member and councillor Brad Nieman broached this issue with Stronach.

“You’re talking about organic beef…so, all the feed, where is it going to come from? How do you plan on supplying all the feed?” Nieman inquired.

“Look, if you got a 100 acre farm, set ten acres aside and have maybe two or three cattle in there. There are some regulations which we would establish together. We would have two brands, up here and in Florida. Here we have grass-fed and hay-fed and the second brand would be grass-fed and hay-fed and organic grain finished,” said Stronach. “I might insist that we have some silos or somewhere we can buy the organic grain at a good price and so we would have to talk those things out.”

Councillor Jamie Forrestor inquired as to whether or not Stronach had developed a formal business plan to go along with his proposal.

Though Stronach did not present a formal business plan as such, he voiced the urgency for a more humane way of killing cattle with conviction, describing a “gut” instinct about this initiative.

Liquid waste would be properly filtered and solid could be turned into manure. Because there are no chemicals used with the animals, all the bones etc. can be used, Stronach countered.

“This size of operation implies over 6,000 acres of organic grazing land, not to mention untold acreage to produce organic hay and grain. It seems likely that some if not much of this feed would be sourced outside the County and trucked in,” stated SSJI spokesperson Cheryl Anderson.

Anderson also takes issue with Stronach misrepresenting his proposed facility as being agricultural, believing instead that it is industry.

According to Anderson, Stronach’s plan for an abattoir, located at 191 Hilltop Road, also includes a pumping station and pipeline at two waterfront locations to allow water from Lake Ontario to reach the facility.

“Our concern is that Mr. Stronach has described this endeavour as agriculture. In fact, we believe that an abattoir is an industry as is a water pumping station on the waterfront,” stated Anderson on behalf of the SSJI.

Despite concern expressed by Stronach for the welfare of cattle to be processed at his proposed facility, the SSJI believe there is not enough concern given for animals already inhabiting that tract of land.

“Looking at Schedule B in the draft updated official plan (for the County of Prince Edward), we can see that 191 Hilltop Road and the land across which the water pipeline would run is within a Natural Core Area. It includes a provincially significant wetland and areas of hardwood forest. The draft official plan does not allow for industrial or commercial development in such Natural Core Areas,” stated Anderson. “The importance of that area to migrating birds and bats and as the home of 23 species at risk, including the iconic Blanding’s Turtle, has been recognized by two Environmental Review Tribunals.

The SSJI stated that they not only oppose the proposed facility, but also urge the County to deny any applications related to its implementation.

Currently, the issue has yet to be considered by council.