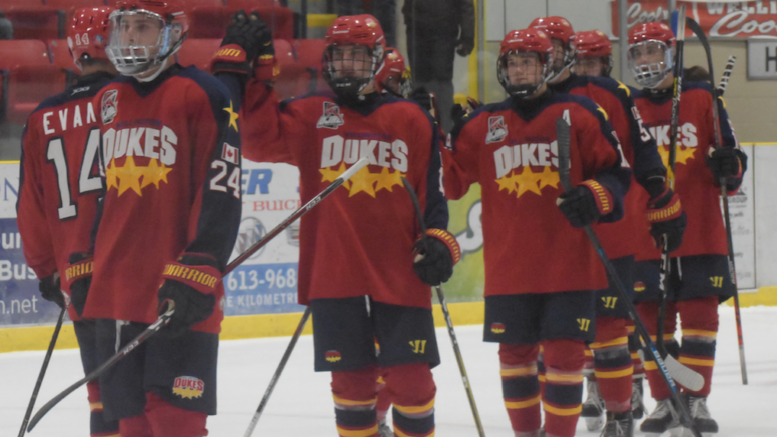 Dukes survive four goal comeback, successfully mount one of their own in dramatic back-to-back wins

It was former Toronto Blue Jays manager Jimy Williams who once told a member of the media they should “argue with my results, not my methods” when it came to criticizing a victory.

In a sport that’s loath to dissect winning efforts such as hockey, old ‘One M’s’ quote could likely be applied to the Wellington Dukes and how they opened the 2019-20 Ontario Junior Hockey League season.

On the face of it, Wellington earned four points by virtue of a last minute,  opening night win at home against the Brampton Admirals Friday and then picked up their first win on the road with a 4-3 comeback victory over the host Milton Menace on Sunday afternoon.

But dig deeper and examine those two wins and Wellington certainly has some work to do and more tweaking before they will feel comfortable in their own skin.

Dukes head coach Derek Smith told the Gazette there were plenty of positives to take out of this weekend’s action- great goaltending, power play structure and finish among them.

But there were concerns as well.

“It’s early and we want to be a hockey team that improves and grows everyday but we know we have to clean up the play in our end of the rink and we need better intensity for a full 60 minutes,” Smith said. ” “We need to stick the game plan. We took our foot off the gas and it cost us in both games. It’s about winning those battles, winning the shift and building towards something.” 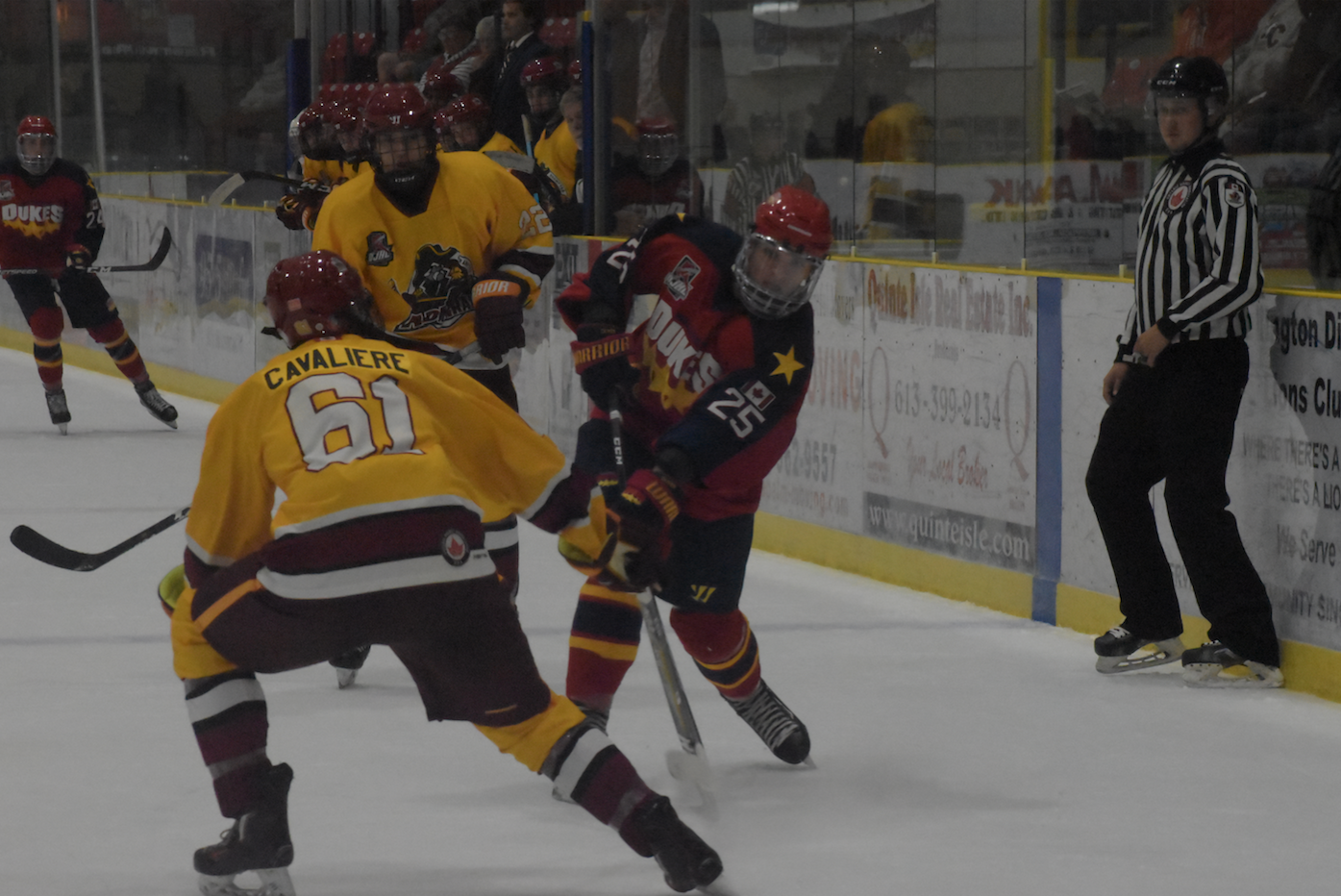 On Friday, Wellington watched a four goal lead evaporate through indifferent play and selfish penalties.
But as has been the club’s Modus Operandi over the last two seasons- Conference winning seasons by the way-, indifferent play can seemingly be eclipsed by this organization with scintillating stretches of fantastic hockey that will leave even the most casual observer breathless at the quality and astonished with rapid succession in which it took place.

Cases-in-point, this weekend’s body of work.

Coming into the season opener Friday on paper, Wellington should ‘ve had little trouble with the Admirals, a club that eschewed the preseason and were suiting up for their first game of the 2019-20 season -exhibition or regular variety.

And Wellington did seem to have a somewhat easy time of it through most of the opening 40 minutes.

The Dukes got on the board just 29 seconds in when blue liner Ben Addison ripped home the 2019-20 campaign’s opening tally off a nice Jake Gagnon feed past Brampton starter Travis Smith.

The lead was doubled when rookie Landon McLellan potted his first of the year at 11:22 and while Wellington might have been sputtering a little in the opening frame, the Admirals certainly looked very much a team that had only practiced through the month of August.

In the second, Wellington started to apply the pressure. 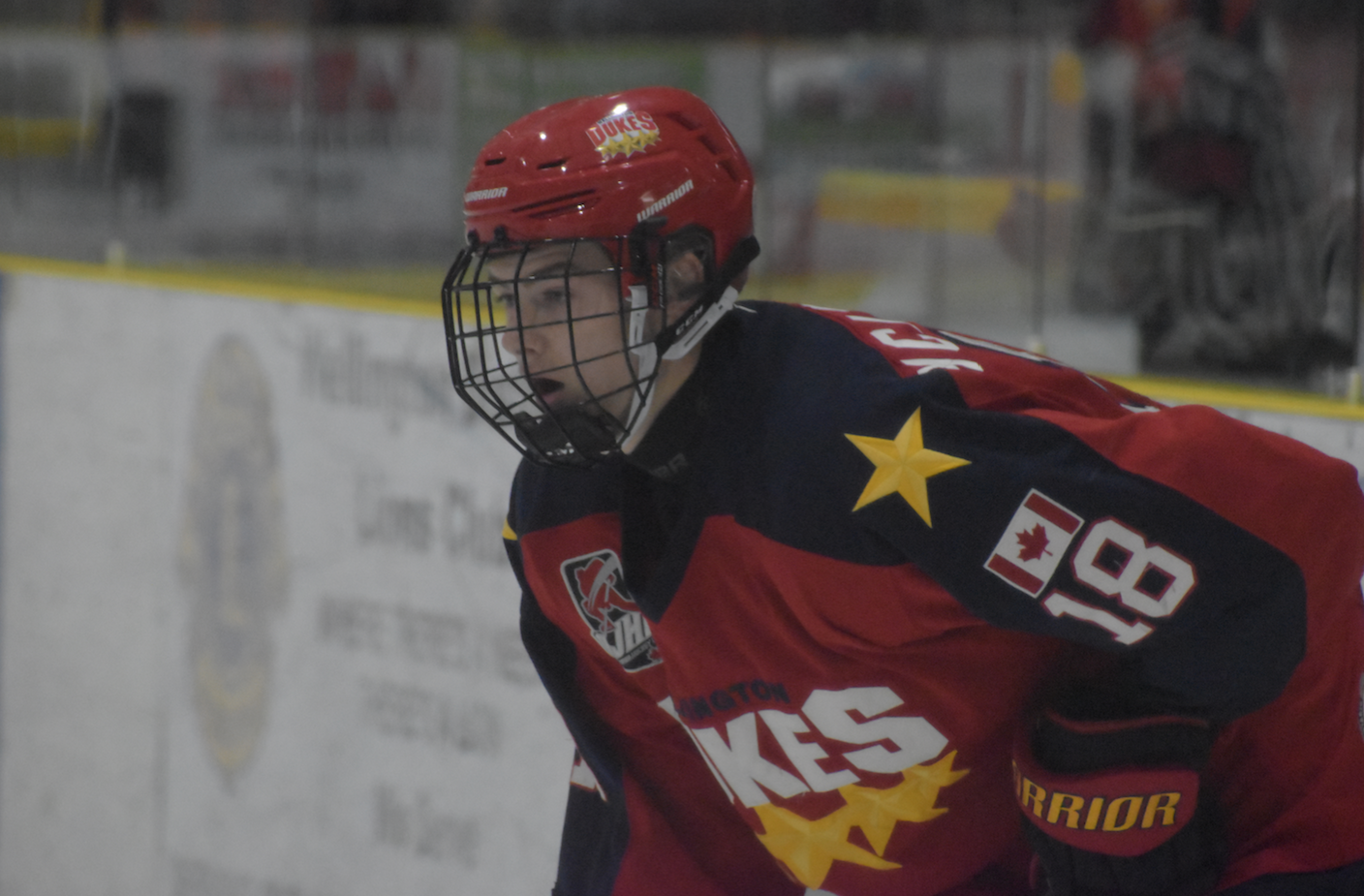 The Dukes needed just 19 seconds of a power play part way through the second to bag their third of the night.

Slick passing by Jacob Breckles and Dan Panetta teed up Evan Miller for this first of the year from the high slot at the 7:40 mark of the second to make it 3-0.

Just over two minutes later, Gagnon, a slick puck mover much in the make of Marty O’Grady or Mark Senecal, made a brilliant play off the half wall to the front of the Brampton net before delivering the puck to an awaiting Frank Vitucci who roofed it past a sprawling Smith at 10:07.

Up 4-0, everything seemed to be going Wellington’s way and the possibility of a rout was in the air.

But then the Dukes started to take penalties.

The club had nearly killed off Luca Marcellitti’s minor for high sticking when Kory Silverio put a rebound past Dukes starter Matt Keeley at 17:18 to get the Admirals on the board.

Wellington’s Dylan Massie took a bad penalty at the Brampton crease, levelling an Admiral after the whistle had gone and ended up with a roughing minor.

With energy in their legs after their first goal, the visitors needed only 15 seconds of power play time before Christos Rodis beat Keeley off a scramble to make it 4-2 Wellington heading into the second intermission.

The Dukes did not start on time in the third and it cost the club a pair of goals in the opening two minutes.

Mike Hill would convert a Rodis feed 51 seconds in and Pat Del Vecchio would tie the game 39 seconds later as the Dukes and their fans were stunned by the sudden turn of events.

Keely, suddenly under siege, would hold the fort while Wellington regained its composure.

Afforded a power play half through the game, the Dukes would capitalize as Ben Woodhouse found captain Ben Evans on the back door for a tap-in at 10:23 to push the Dukes ahead 5-4.

Had it not been the first game of the season and had Wellington not gagged on a four goal lead already, it could have been safely assumed that the Evans tally might be enough to turn the tide in favour of the hosts.

But even though Wellington held Brampton at bay for most of the remaining nine minutes, the lead never felt entirely safe.

Sure enough, with an extra attacker on the ice, Silverio bagged his second of the night to make it a 5-5 game with 58 seconds left.

Given their pedigree and the electric manner in which the momentum was swinging to and fro, one might have considered the Dukes wouldn’t wait for overtime to solve it and it was Gagnon feeding Dylan Massie in the high slot for a game winning tally with just 26 seconds left in the contest.

Smith was impressed with the Point Claire, QC native who has played US prep school for the last three seasons and is entering his last and only Jr. A campaign.

“He has great offensive instincts and you could see that this weekend but what impresses me is the way he takes pride in the play in his own end and his intensity level,” Smith added.

Up 6-5, Wellington still had to withstand a last second charge and only some scrambling play kept a loose puck in the slot area from being batted in by the swarming Admirals and seeing overtime forced by Brampton.

Keeley made 33 stops in picking up his first OJHL win and there were several of the 10 bell variety in the second period before Silverio finally solved the Wellington net minder for the first time in the contest.

On Sunday in Milton for the first time since the days of the Ice Hawks, the Dukes took on the Menace who were in search of their first win of the season after dropping their home opener to Burlington 5-2 on Friday. 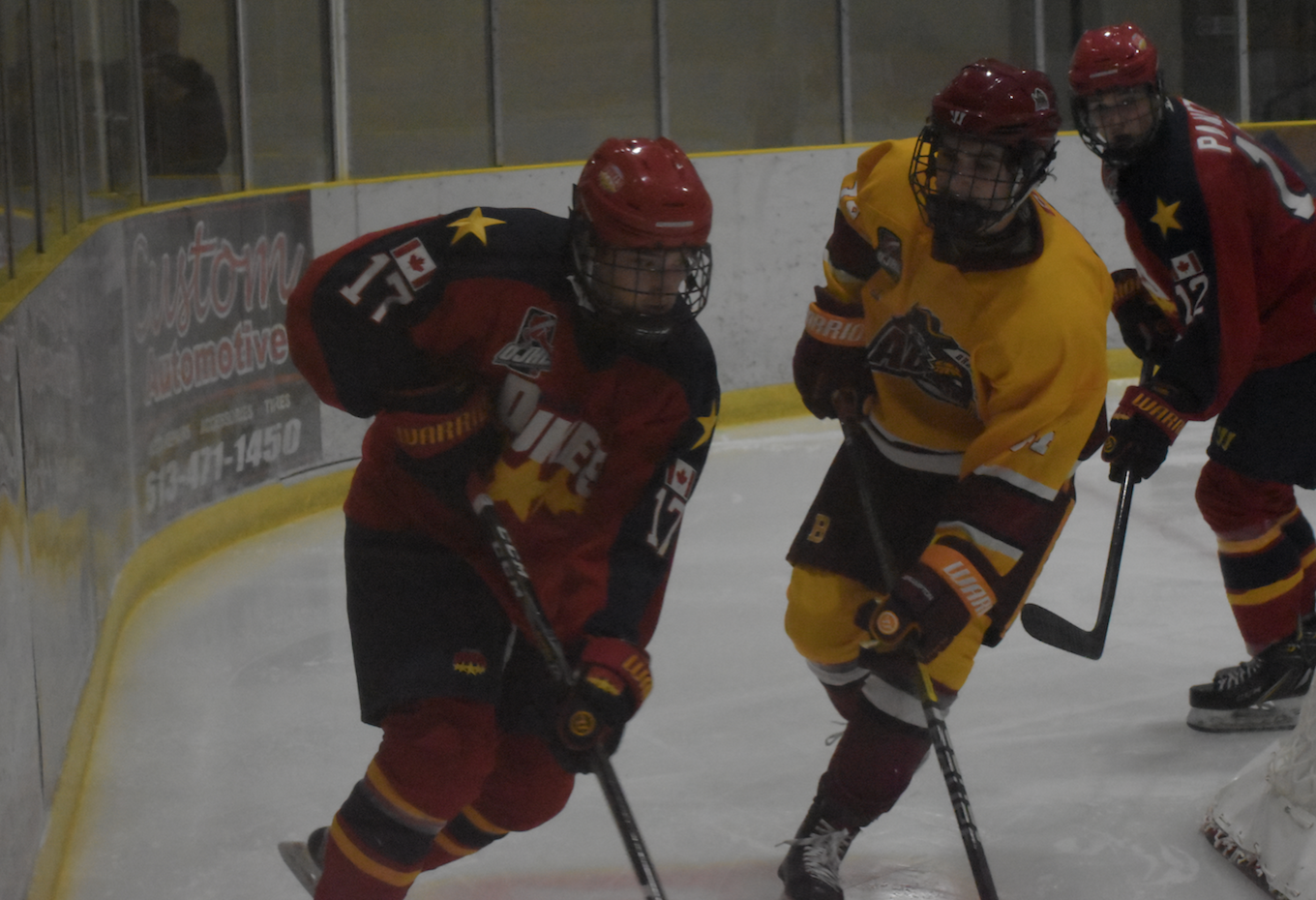 Wellington Duke Evan Miller has two goals in his first two games as a member of the hockey club. (Jason Parks/Gazette Staff)

Wellington turned the net minding duties to Matthew Dunsmoor who they acquired from Burlington in a trade last week.

The Guelph, ON native didn’t have much help as the Menace, formerly known as the Newmarket Hurricanes, roared out to a 3-0 lead through about 30 minutes of play.

But then, as they are wont to do, the Dukes decided enough was enough, flipped a switch and started their comeback.

Breckles would blast a Panetta power play feed at 16:54 past Noah Featherstonhaugh Gowe to get Wellington on the board in the second.

The Dukes continue to keep the train steaming down the tracks in their direction in the third.

Woodhouse would set up Panetta for a power play goal at 6:05 of the third to make it 3-2 in favour of Milton. Then, just 42 seconds later, Miller would get things back to even at 3-3 with his second tally of the season.

Afforded a two man advantage midway later in the frame, defenceman Brett Humberstone picked up his second helper of the third as Gagnon played trigger man and beat Featherstonhaugh Gowe at the 11:38 mark.

Dunsmoor and the Dukes would be tasked with killing off a Humberstone minor in the final minute of the third in a 6-on-4 situation but Wellington escaped any harm to take the game 4-3.

The Dukes host Cobourg on Friday night and travel to Toronto to take on the Toronto Jr. Canadiens in an early preview of a potential of a Southeast Conference championship match up.

Ledes at Lehigh: Defenceman Quinn Hanna remains with the Peterborough Petes of the OHL and is very much in the mix to make Major Junior squad. Hanna is a Peterborough native…Defenceman Noah Massie looked sharp in his Dukes debut but collided awkwardly with an Admiral and suffered an upper body injury some time in the second period. He was unable to return and didn’t play on Sunday in Milton. Smith believes the defenceman might be out for a few weeks…Forward Ryan Smith was also out of the lineup this weekend and will be for some time. Smith took a seven game suspension in Game 7 of the Greater Ontario Junior Hockey League playoffs last spring and also incurred a suspension for flipping the puck out of play during the Aug. 30, 2019 exhibition game in Trenton. Smith will be able to suit up for the team at the 2019 Governor’s Showcase in Buffalo later this month…It could be a long season in Lindsay as the Muskies were outscored 3-19 through their opening three games this weekend.