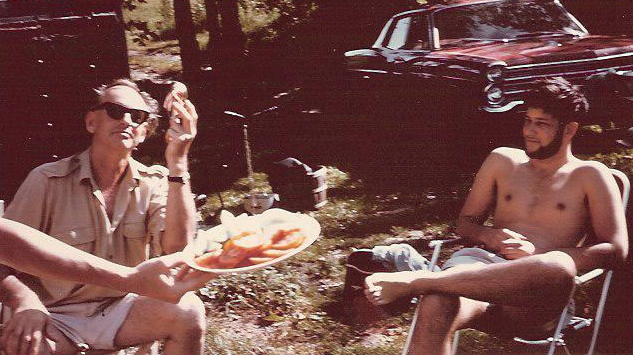 A DAY AT THE 'A'- (From left) Canadian literary titans Al Purdy and Micheal Ondaatje spend some time in the sun at the former's A-Frame cottage on Roblin Lake in the late 1960's. (Al Purdy A Frame Association photo)

Tucked away in the wilds of Ameliasburgh is Al Purdy’s legendary A-frame house. Situated on Roblin Lake, in what was once relative isolation, the Purdy doors will once again be flung open for a rare opportunity to glimpse the literary icon’s “inner sanctum”.

The house, which Purdy and his wife Eurithe built, has been lovingly restored and been used as a writers retreat for over 30 Canadian authors since 2014.

Dubbed Canada’s “unofficial poet laureate”, Purdy burst onto the literary scene in 1962 with his Poems for All the Annettes. In 1965, Purdy won a Governor General’s Award for The Cariboo Horses and another in 1986 for The Collected Poems of Al Purdy.

During the Purdy’s residence at the A-frame, which spanned every summer from the late 1950s to his death in 2000, the A-frame welcomed many well-known Canadian literary figures, such as Michael Ondaatje, Margaret Laurence and Milton Acorn, among others.

“He really was a national poet in a way that you only find occasionally in the life of a culture,” Toronto poet Dennis Lee said in a New York Times report on Purdy’s death.

The open house will feature tours of the A-frame itself, along with tours of the adjacent writing shed, and memorabilia including books, photos, prints and signed items. The proceeds from these, including donations with tax receipt, will go to supporting the A-frame as a retreat for Canadian writers.

Special guest Eurithe Purdy will be present that weekend as well to share memories of the literary icon.

Other attractions that weekend include the Ameliasburgh Fall Fair, with rides to the A-frame. As well, the Ameliasburgh Heritage Village, a large complex of buildings showing what life was like in Prince Edward County in the 1800s, will be open to the public.