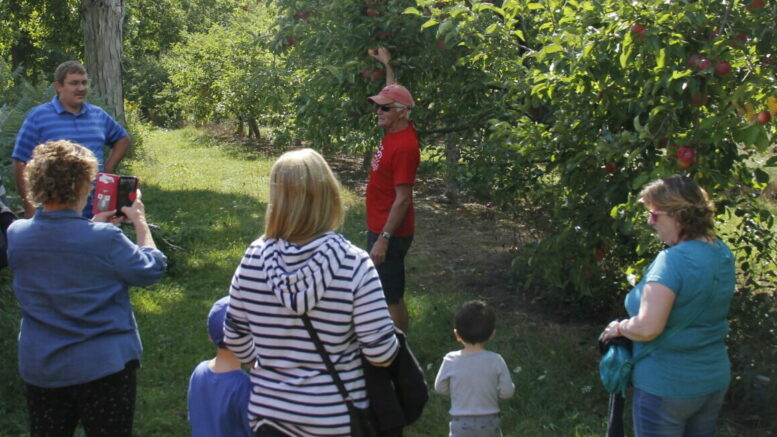 FRUITS OF THE FARM Colin Campbell, owner/operator at Campbell's Orchards, demonstrates how to properly pick an apple on one of the wagon rides through the orchard at their 50th anniversary on the weekend. (Desirée Decoste/Gazette Staff)

With hundreds in attendance, Campbell’s Orchards celebrated their golden jubilee this weekend at their farm on County Rd. 3.

To believe a legacy Prince Edward County farm operation such as Campbell’s Orchards is celebrating just their 50th anniversary is difficult as it feels like the establishment has been around much longer than that.

There was much to see and do at the celebration including a corn maze, wagon rides, petting zoo, a kids play area as well as a nice collection of food and beverage vendors that satisfied any taste.

This year the farm made a new wagon for the 50th anniversary called the “Honey Crisp Express”. The wagon is made out of the boxes Campbell’s put their apples in and it has a roof and latch doors.

Back when the farm was purchased in 1969, John Murray Campbell had plans to enjoy the fields upon retiring.

“My dad was cleaver and got us working on the farm around 10-years-old,” Colin Campbell, owner/operator of Campbell’s Orchards told the Gazette. “He would allow my brother Stuart and I to take any of the produce we had picked, and, as soon as I turned 16, I went and got my drivers licence the next week and we started going to the Belleville Market. We were allowed to sell and keep all the money from anything we picked and sold ourselves.”

This early start to the working world gave the brothers incentive to want to work on the family farm and keep their field crops producing. It also taught the youngsters how to talk to strangers.

“You can’t be two shy little boys standing there and not talking to people if you want to make any money,” Campbell added. “Our incentive was really driven from that.”

Unfortunately, an untimely passing in 1979 left the Campbell  Farm in Colin’s hands at the age of 20.

Over the past 30 years the Campbell’s and their children Amelia and John have built a beautiful and wonderful family business.

Nothing brought the business down, not even the fire in 1996 on Christmas Eve which destroyed the market and all their equipment.

They rebuilt and refurbished with an added wing for the Campbell’s Gift Room which is now shared with Apple Falls Cider for their Tasting Room- another family endeavour.

Mayor Steve Ferguson took to Facebook to congratulate Colin and the Campbell’s family on this huge accomplishment. Ferguson also presented the family with a certificate at the event.

“Colin, Dianne and their family deserve credit for creating a welcoming fun environment that has its roots back to 1969. Colin introduced me to a relatively new strain of apple called “Zestar!” developed at the University of Minnesota, who also developed the “Honey Crisp” strain. The sample I had led to purchasing a 10-lb. Bag, they’re that good.”

Throughout the passage of time, the farm has never lost the late Murray Campbell’s commitment and focal point to grow quality apples and sell directly to the public Colin Campbell added.