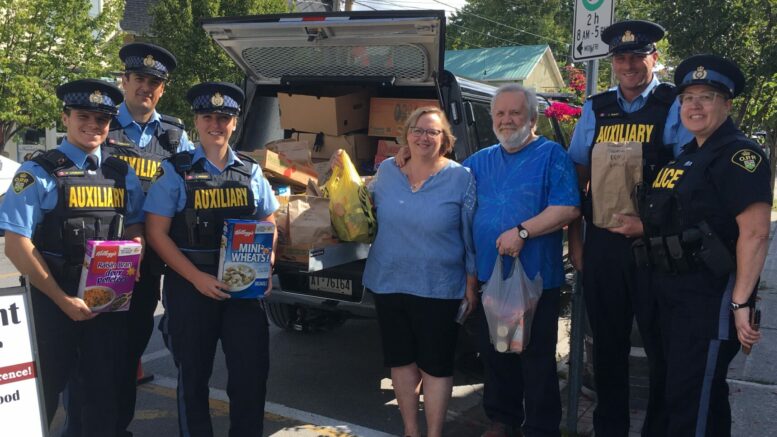 It was a record-breaking ‘Cram the Cruiser’ event in Wellington this weekend.

Prince Edward County Detachment of the Ontario Provincial Police (OPP) assisted the Wellington’s Storehouse Foodbank on Saturday, collecting 303 bags of groceries for those supported by the volunteer-driven organization that supports those in need in our community.

OPP and OPP Auxiliary members were at Pierson’s Foodland in Wellington from 10:00 a.m. to 2:00 p.m. to collect food items for the Storehouse Foodbank.

All told, $514.40 in cash, over 300 grocery bags including potatoes, onions and turnips were collected which eclipsed the previous high of 272 bags of groceries.

Storehouse president Linda Downey was elated with the work undertaken by detachment members Saturday and said the ‘long arm of the law’ tends to get results in terms of donations.

“They have pretty good authority to approach people on the Main street and it’s not too often some one says no to a police officer,” Downey said with a laugh. “We are so thankful for the Prince Edward OPP stepping up and collecting food through this event twice a year.”

While the need to restock doesn’t take a pause, Downey explained that back-t0-school time is a critical period in the operation of Storehouse as well as the post-Christmas winter months when local families struggle with heating bills and other costs associated with the coldest times of the year.

“It’s amazing they were able to beat the record and and I think they have an internal competition to see who can set the new mark,” she added.

Community Safety and  Media Relations Officer Constable Karen German  noted that special thanks needed to be extended to 11-year-old Wellington resident Ella James who donated $40 of her own money on Saturday.

The Storehouse Foodbank is open for business every Wednesday and is located in the basement at the Pentecostal Church at 305 Niles Street, Wellington.

As of September 11, 2019, the foodbank will also be accepting snowsuits and other winter clothing items for the upcoming winter season.