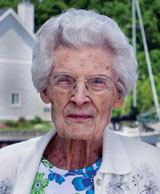 It is with sadness we announce that Beatrice (Betty) Mae Wicken (nee Hickox) passed away peacefully on Tuesday, September 3, 2019 in her 103rd year. She was the beloved wife of Leonard George Wicken and a loving mother to Douglas George Edward Wicken (Kitchener) and his wife, Gudrun Heiss, and David Stanley Wicken and his wife Wendy. She was also the proud grandmother of Scott Douglas Wicken and his wife Shelley Young (Waterloo), Craig David Wicken and his wife Nena Orescanin-Wicken (St. Agatha), and Todd Lance Wicken (Okotoks, Alberta) and was a great-grandmother to Luka Wicken, Rowan Wicken and Gabrijela Wicken. Beatrice was pre-deceased by her husband, Leonard (1997); her son, David (2005) and his wife Wendy (2002); her younger sister, Margaret Picken and her husband, Albert Picken. She was loved as Aunt Betty by many nieces and nephews, among them, Brenda and Lloyd Crawford; Wayne and Gerri Picken; Ron and Colleen Wicken; Mark and Nonie Wicken; the Williams family; the Fowlers, and their extended families. Beatrice was born February 15, 1917, in Brantford, Ontario, the eldest daughter of George Alonzo and Lily Mae Hickox (Fowler) of St. George, Ontario. She married Leonard Wicken in 1941 and, with their two sons, lived in Hamilton, Guelph, Mimico, and Montreal, before settling in Cambridge. After Leonard passed away, Beatrice moved to Picton to be closer to her son, Douglas. Her youngest son, David, passed away in 2005. In 2015, Beatrice returned to Cambridge, taking residence in Hilltop Manor. The family acknowledges the wonderful care provided by the nurses and PSWs at Hilltop Manor in Cambridge who were all so kind. A private celebration of Beatrice’s life will be arranged for family members. She will be laid to rest with the Hickox family in St. George cemetery. Expressions of condolences may be directed to the family at: dougwicken@gmail.com