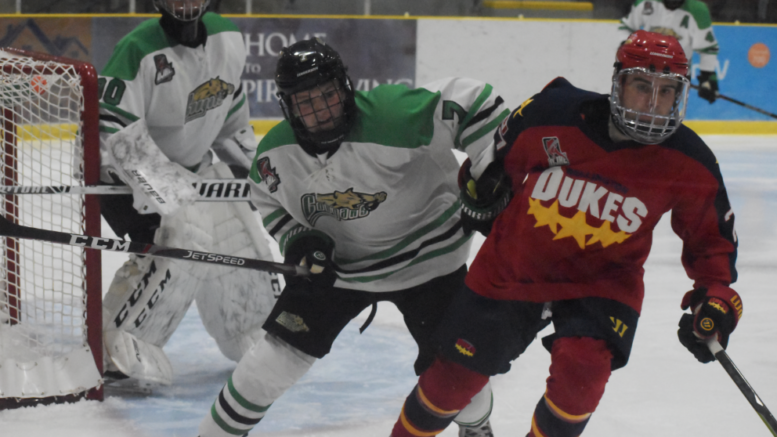 It’s been a solid start for the Wellington Dukes to open the 2019-20 Ontario Junior Hockey League campaign but there are telling signs the team needs to find that extra gear and commit to making an honest effort for a full 60 minutes if they are going to part of the league’s elite this season.

For a second straight weekend, the Dukes relied on resiliency and their ability to turn on their play like a light switch to win a pair of hockey games.

The Dukes utilized a big third period effort on Friday night to outlast the visiting Cobourg Cougars 5-2 and then played comeback in Toronto to skate away from the Junior Canadiens in overtime 5-4.

A 4-0-0 start likely shouldn’t be over critiqued and Wellington Bench Boss Derek Smith stopped short of peeling back the layers of his club’s efforts too far on Monday but did admit the team needed all the character and good fortune it could muster this weekend.

“On paper we’ve had a great start but we’ve had to dig deep in every game so far to get the result we wanted,” Smith told the Gazette Monday. “We’re not playing a full 60 minutes right now.”

Wellington’s win over Cobourg was evidence of that disturbing trend where the Dukes will produce in spurts, sleep walking through portions of hockey games before they snap back to life.

Perhaps part of this is the natural ebb-and-flow of a hockey game but the Dukes are relying on their goaltending far too much to paper over these lacklustre stretches.

On Friday, Wellington opened the scoring with 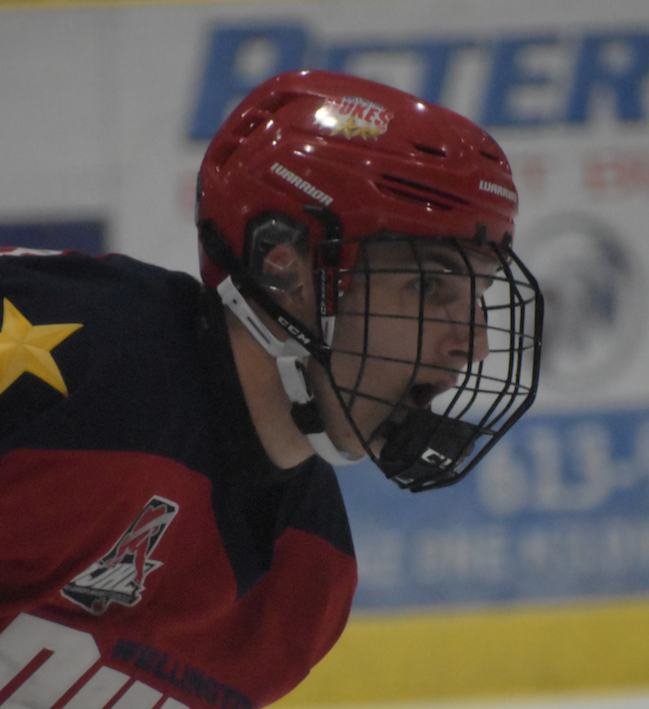 But Wellington couldn’t survive an immediate push back and Cougar’s Michael Olszewski got the visitors on the board just 18 seconds later.

Only 28 seconds after Cobourg tied it at 1-1, Xaiver Martel would beat Wellington starter Matt Keeley to push the Cougars ahead 2-1.

Vreugdenhil and the Dukes responded to that goal with an unassisted tally at 9:36 to make it 2-2.

After the teams combined for four goals in just over three minutes in the first half of the first period, the game would remain deadlocked until nearly the final ten minutes of the game.

“I though we played the final 40 minutes hard and we played better as the game wore on,” Smith said.

Wellington’s Jake Gagnon would break the 2-2 tie at the 8:30 mark of the third, taking a Dylan Massie feed and sending a smart wrist host over the shoulder of Robertson for the go-ahead goal.

Wellington would score on a power play with just over five minutes remaining in the contest to make it a two goal spread.

Defenceman Quinn Hanna, returning to the Wellington lineup after an extended stay with the Peterborough Petes, ripped a wrist shot past a screened Robertson at 14:58.

Gagnon picked up the primary assist along with Ben Woodhouse on the Wellington scoring play.

“Quinn is a tremendous leader to have in our lineup and approaches everything in hockey with a professional attitude,” the former NHLer Smith said. “He’s got a great influence in our dressing room and we are thrilled to have him back with us.”

Up 4-2 in the late stages, Cobourg pulled Robertson in favour of an extra attacker.

Typically, empty net goals don’t receive much verbiage in this space but the job Gagnon did in a defensive zone face off warrants mentioning.

Collecting the puck from the draw, Gagnon allowed the play to develop and laid a perfect bank pass off the boards to send Frank Vitucci in alone on an empty net for an easy goal that made the final 5-2 and gave Gagnon his third point of the period.

Keeley made 23 saves in picking up his second win of the season.

On Saturday in a potential Southeast Conference finals matchup, the Dukes had to play comeback three times before finally besting the Jr. Canadiens in an extra session.

“That’s a really good and skilled hockey team we played against,” Smith commented. “We left (starter Matt Dunsmoor) out to dry for a lot of that hockey game but he bailed us out a lot of the times.”

After Matthew Rehding scored a power play goal with just over four minutes left in the first, Massie would respond thanks to helpers form Luca Macellitti and Landon McLellan at 18:46 to make it 1-1.

The Jr. Habs would again take the lead, this time thanks to a Claudio De Gasperis goal at 12:31 of the second.

Massive would spring Vitucci with 1:18 left in the frame and the teams seemed to be heading towards another deadlocked intermission at 2-2.

Toronto’s Chase Spencer had other ideas however, scoring with just 36 seconds left to push the hosts ahead.

The Jr. Canadiens would build on their lead at the 4:32 mark with a second power play goal, this time coming off the stick of Matthew Falls.

Down 4-2 and inside the final ten minutes of play, Wellington got a spark as veteran Dawson Ellis converted a Vitucci feed at 11:17 to make it a one goal margin.

That margin was erased with perhaps one of the prettiest goals that will emerge from the OJHL this season. 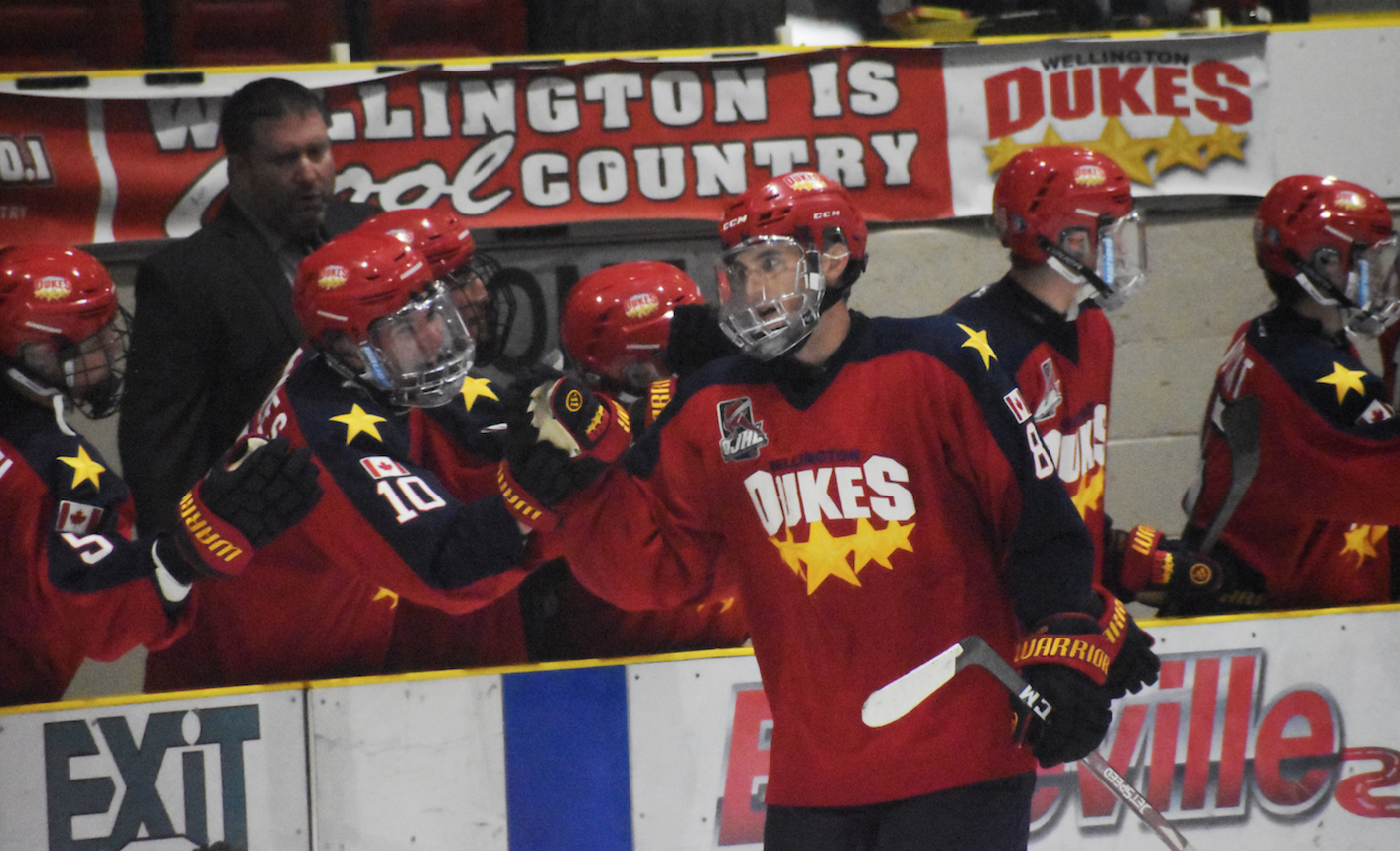 Taking a Brett Humberstone pass, Massie skulked over the Toronto blue line and undressed his check with a great example of the type of puck wizardry skills the St. Lazare, QC native posses.

In alone on Toronto netminder Christian Mattiace, Massie continued to dangle the puck on a string before depositing betwixt the goalie’s legs and it into the Jr. Canadiens net at 13:49.

Wellington would control the play for much of the third, out shooting Toronto 11-3.

The Dukes would produce their first and only lead in the game in overtime when Ben Addison set up Gagnon for his second game-winning goal in as many contests for Wellington.

The Dukes are in Whitby on Wednesday night to play the Fury and then return home to host the Toronto Patriots on Friday night.

The Dukes make their first visit to Trenton on Sunday evening.

Ledes at Lehigh: Miller was sent awkwardly into the boards in Sunday night’s game and will likely be lost to the team for an extended period of time with a lower body injury…After Miller went down and Woodhouse was sent off for a major check from behind penalty late in the second, the team finished the game with 10 forwards. Smith said he was thrilled with the effort of the short-staffed forward group.