The long-awaited Picton Library Expansion has encountered a hurdle at Shire Hall.

At their Committee of the Whole meeting Thursday, County Council made a motion to refer the recent report from the Board of Prince Edward County Libraries to applicable staff in order to address council concerns and work within a $2 million budget.

The report in question itemized the expansion of Picton’s flagship library as being $2.7 million, which raised concerns after council had originally approved a $1.2 million budget and then again in March, saw that budget rise to $2 million.

Apart from the budget increase, the Board of PEC Libraries asked council to award the construction contract for the expansion to Knudson Construction Ltd., in the amount of $2,325,280 plus HST.

As it stands, the board has relied heavily on donations for the funding of this expansion project.

As Amanda Carter, Director of Finance for the County pointed out, any shortfall in donations, resulting in debts owed by the library, would consequently fall upon the County to resolve.

“Ultimately, the building is a County asset so the library is a purchasing agent for us to get the expansion done. Should they not meet their bills, that would come to the County and we don’t have a reserve robust enough that we could draw upon,” stated Carter.

As Mayor Steve Ferguson noted, though he is fully in support of the library system, the County must also be prepared for future budgetary constraints imposed by the provincial government.

“We must be cognizant of what the provincial government will be asking of us, has already done for us, and the scrutiny we are under as to what we do with any of our expenditures,” stated Ferguson. “I am fully in support of our library system and I am appreciative of the work that has gone into this but we need more clarification as to how any shortfall will be financed.”

Sandy Murray, Chair of Finance for the Picton Library Expansion, spoke to the need for allowing the construction bid to move forward which would in turn boost confidence in donors. 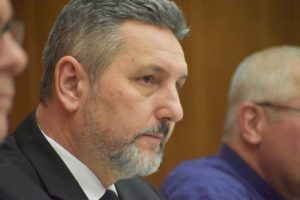 “We are not asking for any additional money. One thing we’ve found in fundraising is there’s two road bumps. One, lack of a definite number. Now, we went to tender and we have a defined number we can go to the community with and raise funds. Secondly, a lot of people who want to dip their hands into their pockets are saying they’d like to see more commitment from council, so today that commitment means approving the acceptance of the Knudson Bid, which the library board accepted,” said Murray.

Of the five contractors who tendered bids, Knudson’s was the lowest.

Though the brass tacks of finances were deliberated around the horseshoe, so was the need for and nature of the library system in the County.

Councillor Kate MacNaughton stated that having a library is an essential service, mainly because of who it serves, describing a direct connection the libraries provide as being an integral part of life in rural Ontario.

“What this can do to invest in the future is similar to what the Carnegie Libraries did when they were built in the first place. The original investment…was transformative for our culture and our communities, including small communities in Ontario. We still see the lingering effects in our society as a whole today,” stated MacNaughton.

Councillor Andreas Bolik, representing Ameliasburgh, posed concerns for development of the five satellite branches within the County. Bolik asserted that many people do not go to the Ameliasburgh Library, instead choosing to go to Belleville or Quinte West.

“It’s nice to have a flagship (library), but if people don’t use it, it’s hard to ask them to pay for it,” argued Bolik.

Supporting this argument was Councillor Phil Prinzen, who decried the comparison made by Murray that both hospitals and libraries are essential services.

“We need a hospital. We don’t necessarily need a library-it’s a nice to have,” stated Prinzen.

Devon Jones, Library Board Chair, reminded council that should this project go to re-tender, preventing them from breaking ground in October, the project could incur further costs.

Councillor Brad Nieman put the motion forward to refer the report from the Board of PEC Libraries for consideration. Councillor Andreas Bolik seconded this motion.