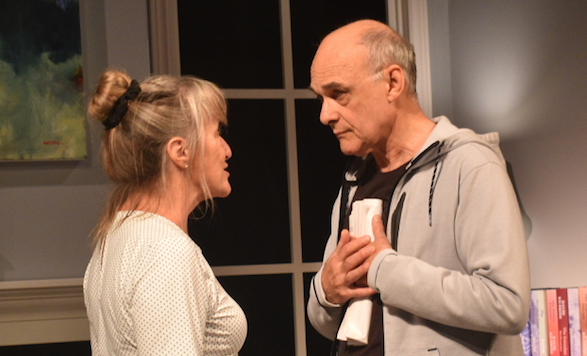 On A First Name Basis, a play by Norm Foster starring Joan McBride and John Koensgen, is coming to Mount Tabor, thanks to County Roads Theatre Company. The storied stage at Mount Tabor will host the play from September 26th until October 5th.

This is a labour of love for the burgeoning theatre company, who only perform those stories which they feel deserve to be told.

Before opening night, some of the cast and crew of this play took the time to speak with the Gazette. Speaking about the impetus of the play was producer Charles Morris.

“By last November, we decided we wanted to do another play and had decided on a script. We’re not a regular production company with a calendar,” said Morris. “When we have a story we think is great and great to tell here in the County-one which we are ready to polish and deliver-then we’ll do it.”

The play begins when “successful but cantankerous” David Kilbride realizes he knows nothing about his maid of 28 years, Lucy Hopperstaad. When Kilbride invites his maid to stay after work and partake of some libations with him, the ensuing conversation leads the pair through a revealing conversation, full of reflection and warmth that breaks down the class divide between the maid and her employer. 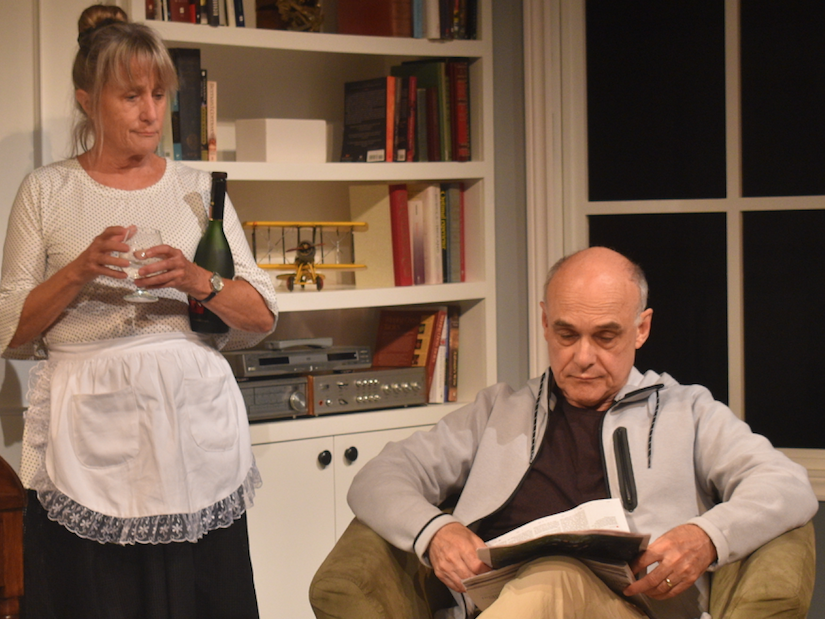 “Over the course of the evening, it goes from very restrained-Lucy wants to be home-and then changes as they learn about each others past. It becomes a very moving story full of pathos, humour and lots of laughter,” said Director Fred Robinson.

Robinson describes the ending as somewhat of a cliffhanger, with the audience wondering what will happen next.

“It (the play) doesn’t wrap it up in a nice little package. Of course, it’s a comedy, but it’s also very serious,” explains Robinson.

Joan McBride, who plays Lucy Hopperstaad, detailed some of the personal evolution that brought her to appreciate her character. McBride, whose professional career has spanned 40 years, went from teaching other actors to focusing solely on her own acting career.

“First of all, I loved the play when we read it. I have to confess I had a little bit of difficulty with what appeared to be a very sarcastic attitude. The language on the page seems harsh but it’s extremely funny, good comedy,” said McBride. “So, Joan had to figure out where Lucy was coming from…to find an approach to sarcasm that wasn’t vicious or debilitating.”

John Koensgen, who plays David Kilbride, describes the script as “complicated enough that it’s hard to remember it separately from the experience of doing it.”

Koensgen has been a professional actor for 40 years, having done everything from cartoons, film and theatre.

“I got into acting because of the theatre,” he states. “I just wanted to be working actor.”

Joining the cast as stage manager is Gabrielle Graham-Stevens. Graham-Stevens, who grew up in the County but now lives in Toronto, is happy to be back in the area to participate in this play.

Graham-Stevens helps to run lines and generally makes everything run smoothly. Once the show starts, the director relies on her help to run the show. As Graham-Stevens modestly points out, this requires she knows all the lines in the play.

Tickets for the play are available online, at the door, or at Books and Company. They are $35 each. For more information, please visit: https://countyroadstheatre.ca/.