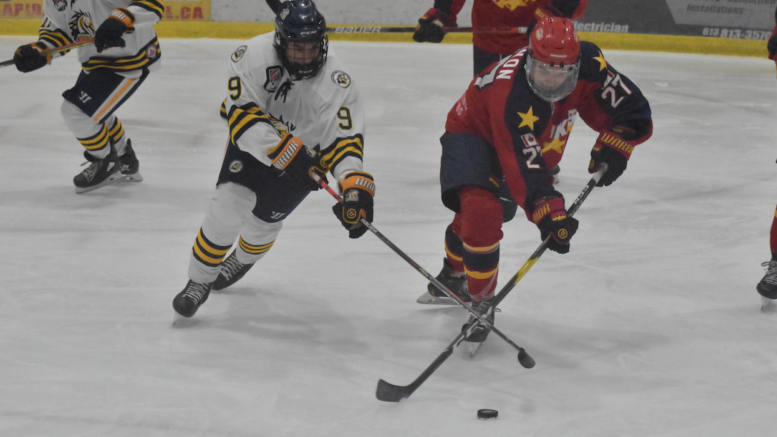 It’s still early in the rigours of the Ontario Junior Hockey League’s regular season campaign but the Wellington Dukes are showing the skill, resiliency and resolve that had many preseason prognosticators penciling them in as one of the top Jr. A teams in the province.

Currently, Wellington finds itself alone as the top club in the OJHL.

The Dukes (6-1-0) are the first team to 12 points in the OJHL as they shook off a mid week setback to the host Toronto Patriots Wednesday to post back-to-back wins this weekend, skating past the visiting Whitby Fury 5-2 Friday before doubling up on the Golden Hawks in Trenton 6-3 Sunday night.

To lead the field at this point of the regular season race, Wellington had been getting a little bit of everything.

Goaltending- Both Matt Dunsmoor and Matt Keeley have been outstanding thus far for Wellington, giving coach Derek Smith option A and option A1 when it comes time to pick which puckstopper has that night’s starting assignment.

Scoring- The top point getter in the league is rookie forward Jake Gagnon who has notched six goals and added 10 helpers for 16 points in just seven games. Right behind the Point-Clare, QC native is Frank Vitucci who is on a goal-a-game pace through seven contests to lead the OJHL in lighting the lamp.

Defence- While the club might not be tearing up the OJHL in this category, the Dukes have responded well to incorporating Quinn Hanna into their lineup and the blue line will be further bolstered once Major Junior veteran Noah Massie is healthy  and able to return to the lineup. In the mean time, the likes of Ben Addison, Brett Humberstone Jacob Breckles, Luca Marcellitti and even Brian Bygrave when pressed into action have utilized a bend-don’t-break approach and the offence being generated from the back end has helped Wellington push past opposing teams.

All of these factors were on display Sunday in Trenton as the East Division co-leaders hooked up for first time in 2019-20 in what was a chippy affair with 17 infractions whistled on both teams combined.

The game was exactly 62 seconds old when Gagnon converted a Vitucci feed to stake the locals to a 1-0 lead.

Just under three minutes later, Gagnon picked up his second assist on an Addison tally to push Wellington ahead by a pair just 3:40 into the game.

Trenton veteran Dylan McMahon would beat Dunsmoor clean at 10:58 to get the hosts on the board at 2-1.

Wellington would out shoot the Golden Hawks 18-9 in the second and would once again strike quickly.

Vitucci’s first of the game was assisted by Gagnon for his second helper of the night period at 5:23 of the second to make it 4-1 and that was the end of Anand Oberoi’s night as Trenton coach Pete Goulet had seen enough of his starting goalie, sending Oliver Troop in for relief.

A power play tally by Dylan Massie at 9:27 of the second put the game further out of reach at 5-1. 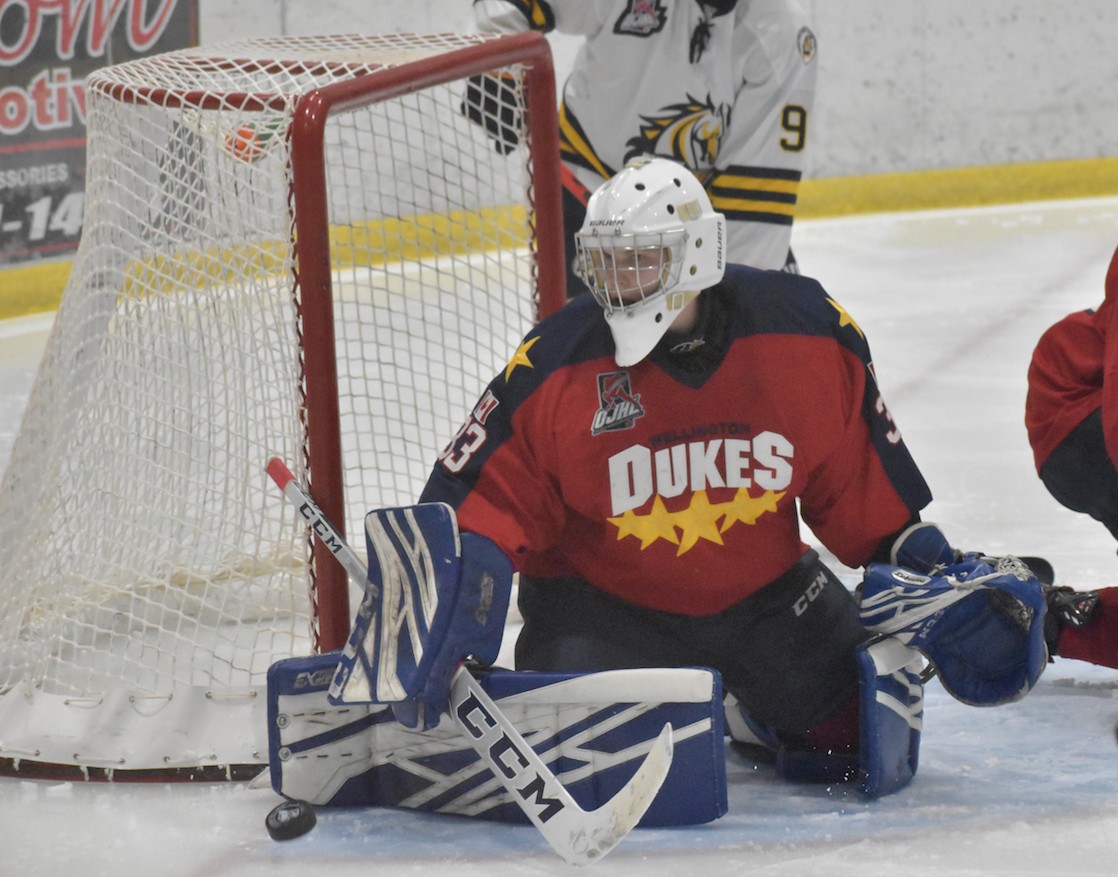 The Golden Hawks would make it much more interesting on paper than the game was in actuality with a goal at the end of the second and another midway through the third to get back to 5-3 but Vitucci sent his league leading seventh goal into a yawning Trenton cage with eight seconds left to make it a 6-3 final.

On Friday, Wellington controlled large sections of the contest against the Whitby Fury in a strange game that always seemed to be in the host’s control but never fully developed into the romp one might have suspected.

Gagnon’s backhanded effort from the slot at 9:38 opened the scoring to give Wellington a 1-0 lead.

Late in the fram and on the power play, Wellington showed some wizardry with the puck as Gagnon’s smart feed from the high slot found a lurking Humberstone to the right of Whitby starter Connor McKenzie.

The Fury goalie bit on Humberstone who feathered a one timer to Jacob Vreugdenhil at 17:01 for Wellington’s second of the frame.

In the second, Wellington would let off the gas a little bit and Ethan Doyle’s odd man rush goal would net the visitors their first of the game just 32 seconds into the frame.

But Wellington restored the two goal lead thanks to great vision from Dan Panetta who found an open Vitucci at the side of the Whitby net and flipped the puck over a sprawling McKenzie to make 3-1.

Dunsmoor would be tasked with flashing their leather 20 times in the period as the Dukes were outshot and mostly outplayed.

Duns moor made one stop that had the Fury shaking their head a split second after a number of them rose their hands in error thinking they had beat the Wellington netminder.

The Dukes regrouped in the third and, while Doyle would strike again- this time 60 seconds into the period, the Dukes would toy with the visitors for most of the period.

Finally, with time winding down, Dylan Massie spotted Gagnon at the side of the Whitby net for a fifth Dukes tally that provided Wellington with all the insurance the club would need.

Dawson Eills would bang home a Gagnon rebound in the dying seconds that gave the League’s leading scorer a four point outing, his first of two straight four point games.

On Wednesday, Wellington would take a lead of 2-1 into the third period but came away empty handed against the Patriots at Westwood Arena in Toronto.

Ben Evans notched a short handed effort at 7:27 of the first to put Wellington ahead.

Keeley was busy in the Dukes cage facing 20 shots in the frame and looked to be well on his way to escaping the period unblemished but a Josiah Degazon effort with 45 second left in the first made it 1-1.

Wellington would have the only goal of the second as Panetta found Vitucci 54 seconds into the stanza to make it 2-1 for the visitors.

A pair of power play goals by Pats vets in the third would sink Wellington’s hopes of escaping the Big Smoke with a point or two.

Paul Spadafora would tie the game at 2:17 of the third and Jackson Alexeev would give Toronto its first lead of the game at the 10:43 mark.

Wellington would get a five minute power play under a minute afterwards in which to tie the game but Toronto’s Mario Peccia was more than equal to the task, negating any comeback bid by the Dukes.

Wellington is in Buffalo to take part in the 2019 OJHL Governor’s Showcase event.

The Dukes take on winless Aurora on Tuesday night at Harborview Center and then meet the Burlington Cougars who have started the season 5-0-0 in what will likely be the event’s best game Wednesday.

After that game, the Dukes are off until Sunday afternoon when they host Trenton at 2:30 p.m. at Lehigh Arena.