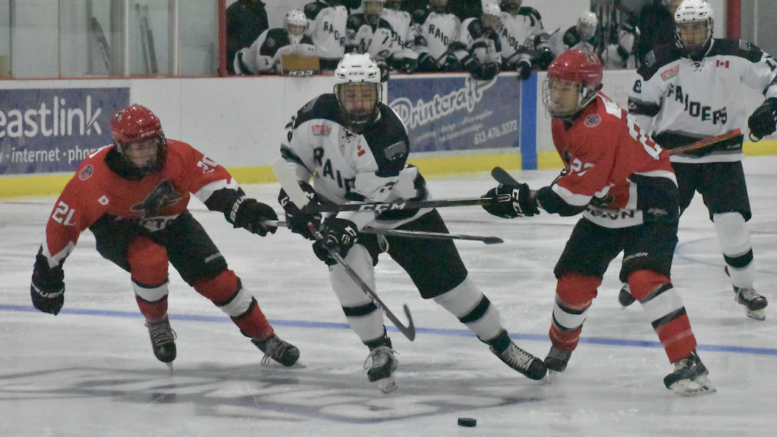 BUSTING THROUGH- Napanee Raider Aidan McFarland tries to escape the checking of Brayden Adams and Matt Poole at Huff Estates Arena Thursday night. McFarland had a pair of goals for the visitors who topped Picton 4-2 (Jason Parks/Gazette Staff)

A pair of tight loses by the Picton Pirates to two upper echelon outfits in the Provincial Junior Hockey League this weekend indicates how close the local Junior C hockey club is to inserting themselves into the same company.

And perhaps just how far the team has to come to be involved in such conversations. 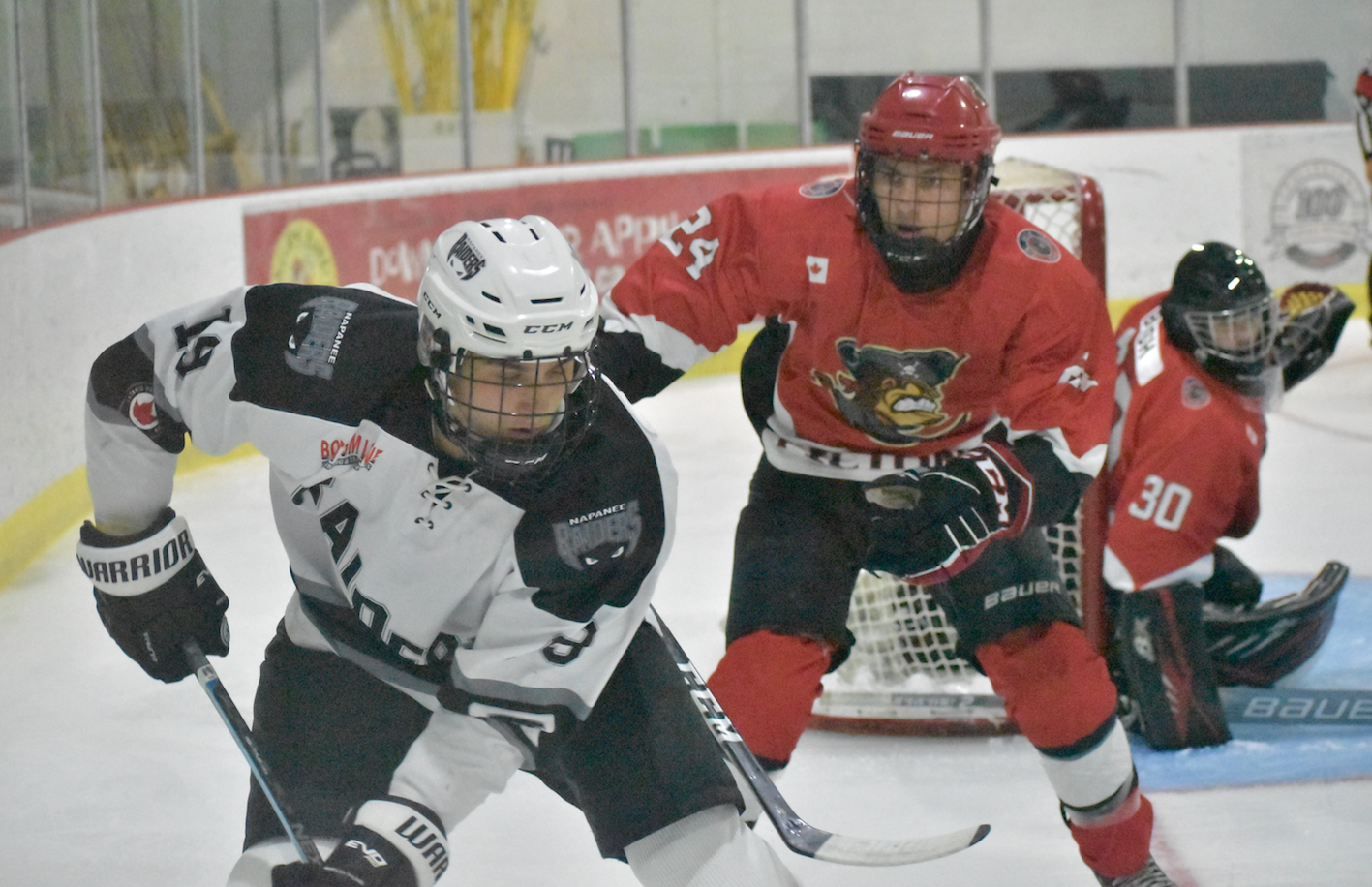 On Thursday, Picton welcomed the Napanee Raiders to Huff Estates Arena and their first game against the Napanee jabberwock went far better than when the two clubs hooked up for the first time last season.

The Pirates actually pulled in front of the visiting Raiders in the second period only to see Napanee come back and force the issue in short order, pulling ahead 3-2 at the end of the second and adding a goal late to make it a 4-2 decision.

On Saturday, Picton was in North Kawartha and led after the first period 1-0 but wound up falling to the host Knights 3-1.

In both games, Picton was within a goal in the last minute of play but were unable to find an equalizer with the goalie removed for an extra attacker.

The effort is there, this team is working hard every single period,” Pirates Head Coach Tyler Green told the Gazette Monday. In Saturday’s game we lost some bodies to injury and  guys had to dig deep but we had some really strong rushes in the third and came very close to tying it up.”

Owen Dever and Nate Brant left the game due to injuries but Green expects both players back on the ice sometime this week.

As was the indication from the break  of training camp and is just as true currently, the Pirates are a strong, defensively sound hockey club who are already understanding they won’t be wining too many fire fights with the elite of the top teams of the PJHL.

Green said some of the scorers on his club are just starting their junior hockey careers and will need time to develop that polish around the opposing net.

“It will start to flow with getting more opportunities,” Green added. “It’s a huge adjustment for a lot of these players coming from minor hockey and it’s up to the veterans to help pull the load right now.”

On Saturday night in Apsely, Owen Dever would stake the visitors to a 1-0 lead in the first with a nifty unassisted effort at the 12:23 mark  of the opening stanza.

In the Pirates net, Eric Tessier was outstanding, flashing the leather a number of times over the first two periods, making 26 stops.

The only Knight to beat Tessier in the opening 40 minutes was Knights veteran Cole Arnold who grabbed a loose puck at 2:19 of the second and managed to solve the Kingston native to even the score at 1-1.

Knotted at 1-1 midway through the third, the Pirates were haunted by Zack squared as Zack Pearson fed Zack Nicholson at the 10:22 mark of the third for the game winner. 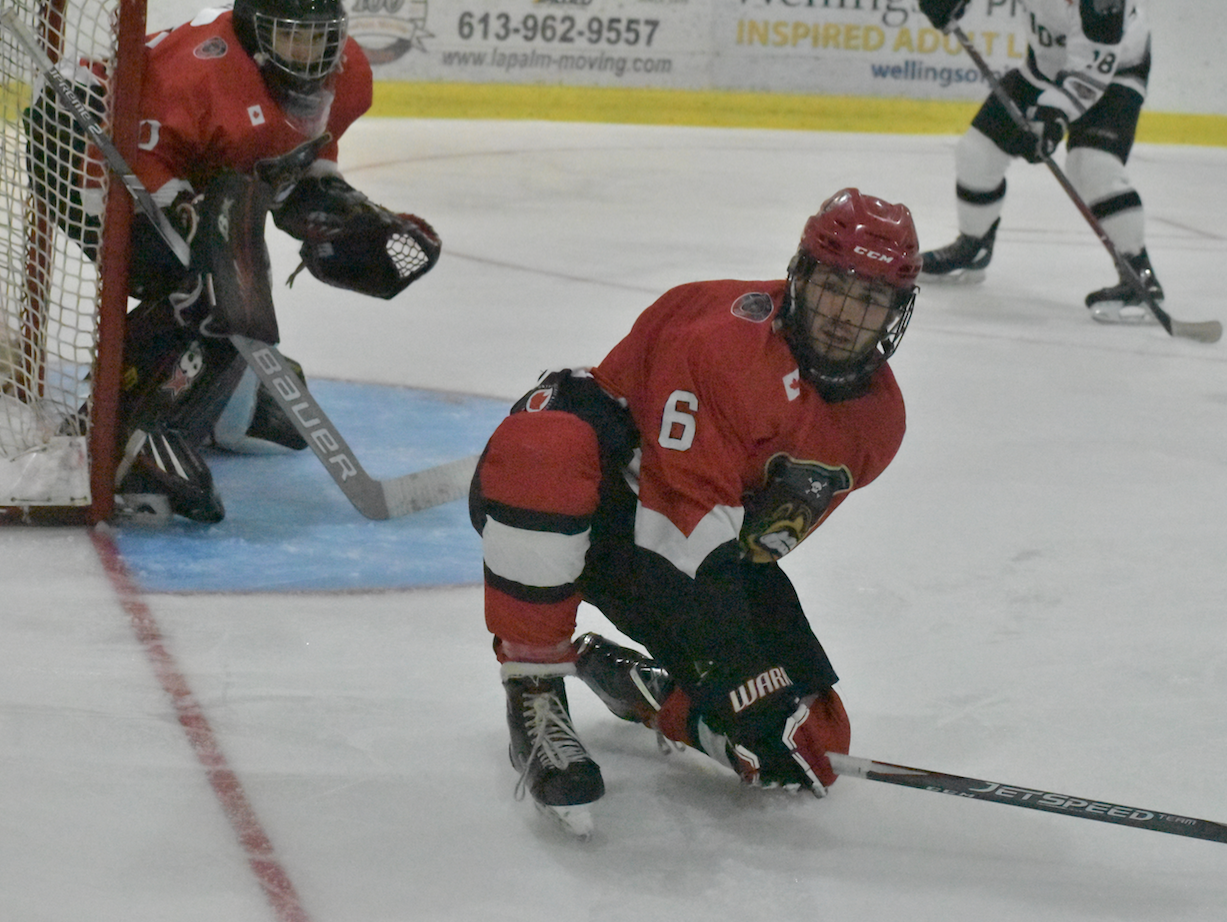 Former Pirate Justin Arnold beat the buzzer, sending the puck into a yawning Picton cage with just one second left to make it a 3-1 final

On Thursday, Picton once again opened the scoring first as Nick Kyte and Will Harrison drew assists on Khaden Henry’s first of the season at the 6:45 mark.

The Pirates were unable to hold that lead for long however as Aidan McFarland showed off his Major Junior skills that helped him suit up in 82 Ontario Hockey League games, beating Pirates starter Brennan Bush 10 seconds shy of the half way point of the first.

Picton would again grab a lead in a period, only to see Napanee come back and tie the game in short order.

“Defensively, there was a lot of hard work and everyone in that lineup is committed to doing what it takes.We have grit guys that are getting into those shooting lanes to win the battles but when you are facing teams like Napanee and North Kawartha, it only takes a couple of mistakes and teams of that pedigree are going to burn you,” Green said.

Griffen Conger came back to haunt his former team, sending a puck past Raiders starter Mitch Brown at 13:41 while Picton was enjoying the man advantage.

Derrick Vos and Harrison drew assists on the play.

But just under two minutes later, a mistake Green referred to harangued the Pirates.

Unable to capitalize and clear the puck after an extended push back shift by the Raiders, the Pirates and Bush surrendered a seeing-eye shot from Napanee blue liner Curtis Marrsion at 15:31 to make it 2-2.

Things went from bad to worse for Picton as a disgusted Nick Kyte flipped the puck out of play and incurred a game misconduct and a two game suspension after the Raider tally.

Less than a minute later, Picton would take a penalty and McFarland hammered home a one timer off a Brodie Maracle pass at 17:01.

Trailing 3-2, the Pirates would get a few chances to tie the game off the rush but extended periods of play in the Raiders end were in short supply.

Finally, with bush removed for an extra attacker in the late going, former Wellington Duke Evan Foley was able to shoot the puck into the vacated Picton cage to make it a 4-2 final.

Picton plays a rare Thursday night game on the road as they are in Port Hope to meet the Panthers for the first time this season.

The Pirates are at home to Lakefield on Saturday for a 7:30 p.m. start.