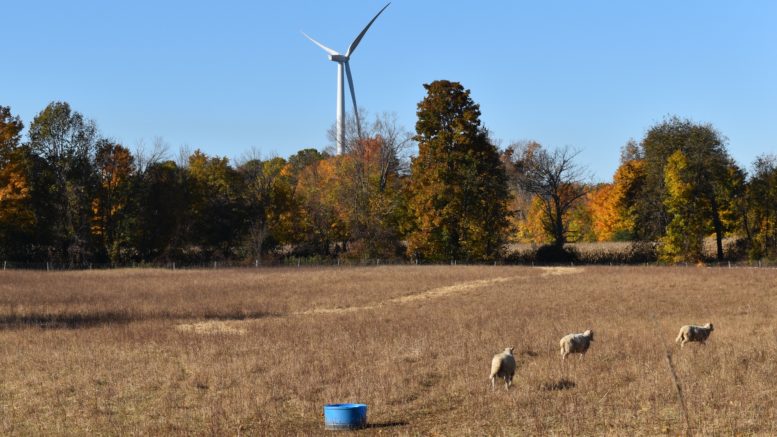 Industrial wind turbines, some of which were hastily erected early last summer in South Marysburgh will be coming down before they ever produced a single kilowatt of green energy for the Ontario power grid.

The first phase of the work involves a crane arriving on site and lowering the towers to the ground. That work will take place between October 15 and January 31, 2020.

The road users agreement between the County of Prince Edward and wpd White Pines Wind remains in effect. Should any road closures be required for the delivery of the crane, the municipality will notify the public.

While site preparation started in earnest many months prior, wpd instituted a crash program late last spring to raise a number of the turbines even though the incoming provincial government announced shortly after being elected they would be negating a number of green energy contracts throughout the province including the wind energy initiative in south Prince Edward County.

Cheryl Anderson of the South Shore Joint Initiative spoke with the Gazette on Wednesday and said overall, the group is happy to hear the turbines would be coming down and the turbine sites would undergo remediation.

However, that remediation could take place in April when the endangered Blanding’s Turtles will be foraging and that’s a concern for the SSJI.

“There really needs to be education with those workers who will be decommissioning the turbines that there will be turtles in their path,” Anderson said.

The SSJI Chair wished to thank all of those community members and those concerned about the fragile ecosystem in south Prince Edward County that voiced their support for stopping the wpd Green Energy project and also mentioned there was about $250,000 still owing the group’s legal team.

“We will need to continue fundraising to meet our obligations,” Anderson added.

Estimates provided by legal analysts indicate the cancelation of the wpd project could cost Ontario taxpayers upwards of $100 million.

The second phase of decommissioning, which is anticipated to begin in April 2020, will involve the removal and remediation of infrastructure installed for the project.