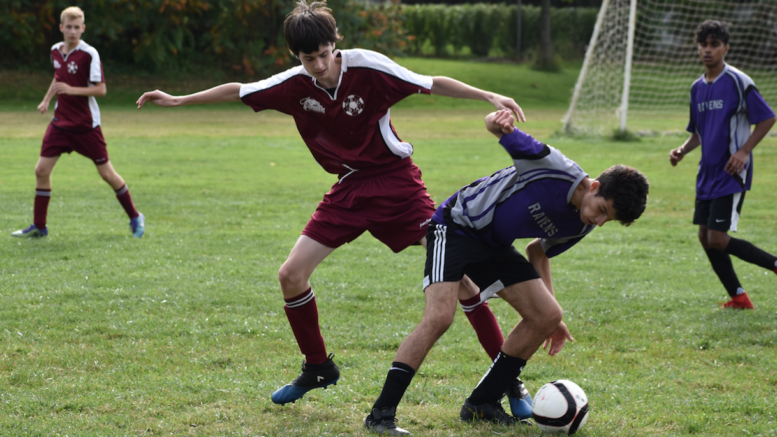 ON THE PROWL-Senior Panther Ben Hicks tries to get around an East Side Secondary School defender during PECI's 3-1 win at home on Tuesday. (Jason Parks/Gazette Staff)

The PECI Senior Panthers will head into their match against the visiting Nicholson Crusaders undefeated after winning their first three games of the 2019 Bay of Quinte Athletic Conference regular season.

The Cats struggled in the first half of their latest triumph on Tuesday against the visiting East Side Ravens but managed to pull away in the second, besting the visitors 3-1.

“Our guys really pulled it together in the second half and I give credit to some of the returning players who are really disciplined. They brought us back to a system and gave us the space we needed up front,” Walcott told the Gazette after the PECI win. 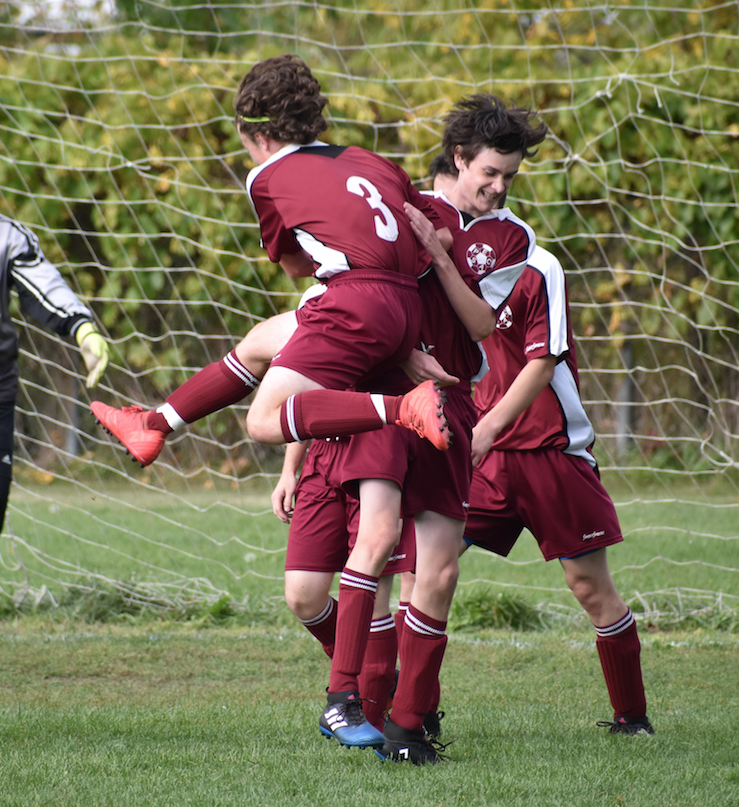 Ross Maycock playfully crashes into Ben Hicks after the latter scored to put PECI ahead for good on Tuesday afternoon. (Jason Parks/Gazette Staff)

This season the Panthers are blessed with a glut of returning five year players including striker Joey Monroe and Alex Arsenault who played goal last season but looks right at home serving as PECI’s middle full back.

Veterans Anthony Lawrence and Devon Wilton are also back for a third senior season.

Add to that a number of first year players including Grade 10 underage midfielder Kacey Cocklin and PECI has an intriguing mix of experience and enthusiasm that’s poised to make a run at an ‘A’ Ontario Federation School Athletic Association Championship birth after the school’s ‘AA’ status was downgraded due to lower secondary panel enrolment.

“We’re blessed because we do have those players coming back this season and they are a great addition to the crop of players that have graduated from the junior ranks last season,” Walcott added. “The chemistry is really working here to start the season.”

That chemistry came together on Tuesday in a solid win over the Ravens.

Wilton would stake the Panthers to a 1-0 lead thanks to a misplay by the East Side goalkeeper.

The Ravens would come back to tie it up before half time.

Tied at 1-1, the Panthers took control in the second and it was Ben Hicks taking the ball from the corner, eluding a defender and booting home the game winning goal partway through the half.

Later PECI got a key insurance marker thanks to a brilliant Cocklin throw-in to Wilton.

Wilton was able to take the feed in stride, work his away around the Raven back line beat the East Side goalkeeper, sneaking a nice boot between the goalie and the near post.

PECI’s goalkeeper Case McFarland was tasked with making a couple of nice saves to keep the Ravens from mounting a come back.

Monroe, speedy Matt Stevenson and Wilton would count for PECI while keeper Ryan Doolan kept the Falcons off the board with a clean sheet.

The Panthers kicked off their 2019 season Tues. Sept. 17 with a 2-1 win over the host Bayside Red Devils.

Conklin and Stevenson scored for the Panthers who relied on a late penalty kick save by McFarland in the final two minute of play to escape with the win.

PECI welcomes Nicholson Thursday and a large home crowd is expected to be on hand as the school hosts its annual athletics day.

Kick off is a noon between two teams that got to know each other well during the 2018 playoffs.

“It’s going to be a good, energetic game. The teams have a good rivalry that I’m sure will carry over from last season and that’s what you want when you head into a competition like this and we are looking forward to it and we know it’s a great test for us,” the coach said.