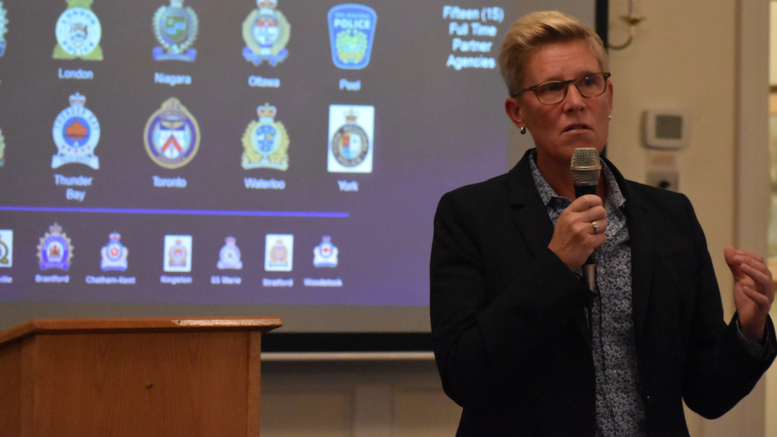 A lead program cooridindator with the Ontario Provincial Police offered an overview of how her organization is combating Outlaw Motorcycle Gangs (OMGs) in Ontario at a regional meeting of Police Service Boards in Prince Edward County Thursday.

Detective Staff Sergeant Leslie Waldron was in Picton Thursday to provide members of the Ontario Associations of Police Service Boards as well as elected municipal officials from Prince Edward County and neighbouring municipalities an overview on criminal motorcycle gang activity in the province and how the public can help the OPP eradicate OMGs.

While Waldron typically presents directly to other police agencies and law enforcement members in Ontario, she said she was grateful to deliver information to the public regarding motorcycle gangs and their activity in the province and that local communities can be the eyes and ears for the OPP as well as not accepting of the presence of OMGs in their areas.

Waldron discussed the dozen or so ‘one per cent’er’ clubs and support gangs and explained the terminology.

According to Waldron, 99 per cent of motorcycle riders abide by the law and live within the laws of society.

“The one per cent’ers don’t accept those laws and say ‘We live our own way, by our own rules’” Waldron said.

The Detective Staff Sergeant said it’s often difficult for front line members of the law enforcement community let alone the public to determine  ‘who’s  who’ as private clubs that might be completely law abiding wear materials that mimic those in support clubs that are connected with the major OMGs.

The operations of OMGs are also changing as organizations broaden their scope in a goal to accumulate wealth and extoll power.

“At one time, members of an (OMG) would never be seen with or in contact with other organized crime outfits such as the mafia or asian gangs let alone conduct business with them,” Waldron said.  “Those days are done. There was also a time where an OMG would never have a black or asian member. You had to be male and white to be in a gang but that is not the case anymore.”

Support groups that undertake the grunt work, dangerous activities and criminal enterprises are where the  danger lies with the public,

“High end Outlaws and Hells Angels members are driving top of the line vehicles, they aren’t driving motorcycles. We might see them on a bike once in a while at a function or rally but they are  flying on private jets,” Waldren said. “Support clubs are out doing the majority of the crime, the organizers are up above. In order to disrupt the operation, the heads of the snake are who we have to go after and target.”

However, it’s the linking of the heads of organizations to the underlings and, more importantly, seizing enterprises -illicit or otherwise- that sustain the organizations and those in control.

“Just putting OMG members behind bars do not stop the operations. We have not stopped, disrupted or dismantled an organized crime groups just because we have arrested them. There’s always someone ready to replace them on the team. It’s just like a hockey team.”

Waldron said OMG enforcement needs to be on a national and international scale and currently,  these groups are national tactical and intelligence priorities

“OMGs and the Hells Angels are the number one priority in Canada,” Waldron said, explaining further while gang and gun violence in major Canadian cities might seem more pressing, the connection to the OMG organizations are never too far in the background.

“OMGs are highly responsible for the guns coming into this country illegally. They are working with gangs in Toronto and moving drugs, guns and human trafficking and selling it all along the 400 series highway corridors.” Walden said. “It’s not isolated in Toronto. We need to work with our  national partners in a unified effort, step out from our traditional roles and even partner with everyone in this room and anyone else in communities. The more ears out there the better because somebody knows somebody. ‘So and So just moved in and opened a restaurant or other business in my town’. I want to know that, I want to find out if that’s being licensed to an OMG member. That has my attention. Once we can establish the connection, we get to seize the business and all of sudden, its not making money. We take away the ability to make money, we have disrupted the gang.”

As part of the two day session, Prince Edward Detachment Commander John Hatch provided an overview of the Community Safety and Well-Being Plan that has been adopted by the County of Prince Edward Friday morning. The plan has been lauded by other police agencies and PSBs in the province as a potential blueprint for community safety strategies in other rural municipalities.

The CEO of MADD Canada Andrew Murie was also in attendance and offered an overview of the organization’s mandate and comment on recent changes to the impaired driving legislation.