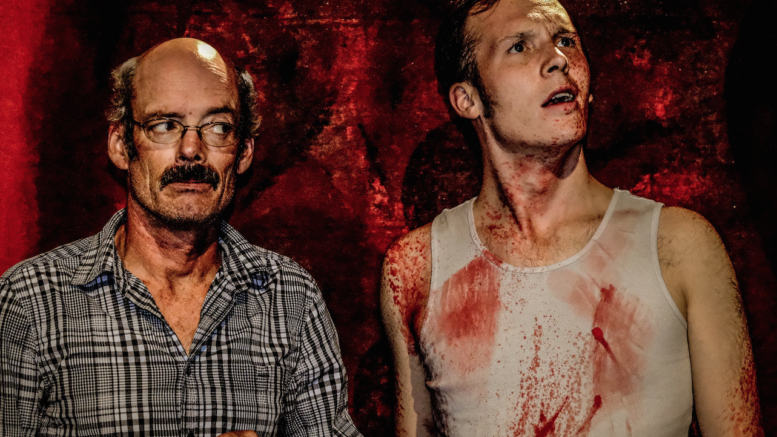 RED, a production penned by John Logan and produced by Shatterbox Theatre, can be seen at the Regent Theatre from September 27th-20th.

The performance, starring local actors Pat Larkin and Jacob Dey, is the closing production from a theatre company that promises to “push the envelope”.

The play is centred around abstract expressionist Mark Rothko  who became well known in the late 1950s and early 1960s. Set in New York, RED takes place when Rothko is commissioned to complete a series of paintings for the famously opulent Four Seasons Restaurant. Rothko is faced with serious moral quandaries when he hires a young assistant who subsequently questions the painter on the nature of art and integrity or “selling out”.

“We really wanted to celebrate the artist and the process of making art,” said Director Georgia Papanicolau. “We know the County is a hub for all sorts of artists and people who craft things-that really drew me to this piece. Also the writing is really beautiful. I wanted to explore and talk more about what inspires somebody to create something.”

RED also touches on the impetus and the goal behind creating art stated Papanicolau in a play that is fascinating to watch.

“People look at theatre and question whether it is really art,” said Papanicolau. “It is art. We don’t use paintbrushes or canvases, but in a way we do. Our actors are the paintbrushes and the stage is the canvas. Actors are walking around as if they’re putting paint on the stage, using every single nook and cranny. It’s like one big canvas and the show is just creating one big painting throughout all the scenes”

The director describes the scope of the play as being “grand”. But, it’s not just the scope of issues at play that’s expansive. This is, in part, why Papanicolau chose to include RED as the closer for this theatre season.

“You see the whole process of art being created. You see the beginning, the middle and the end. It makes sense to end the season with that. These paintings that we’re recreating, we’re inspired by this work. You’ll see canvases that are 8×7 ft large! There’s even a scene where you’ll see the two actors painting on stage. Not only do words fly, but the paint flies.”

Playing the part of Rothko’s assistant is Dey, a Queen’s University drama student. Dey states he has been involved in community theatre since he was about 13 years old.

“What I like about RED in particular is it’s a really fun, meaty roll. I haven’t been in a play before where it’s just two guys on the stage who stay there and talk for an hour,” said Dey. “It’s a lot of pressure, but it’s also a great exercise in skill.”

Well-known County actor Pat Larkin is cast in the role of the tempestuous Rothko. Larkin has been active in the community theatre scene for decades, appearing in productions for just about every local theatre company.

As Larkin states, the play is set at a pivotal moment in the artist’s career but even that has been called into question.

“If you go by what the author said, he was at the cusp of his career really expanding, but if you speak to other people going back in history, he was relatively unknown when this Seagram thing hit. On top of that, he’s someone we can look back and make all sorts of assumptions about,” Larkin said.

The actor also notes that the play draws upon quotes from a variety of interviews and other interactions with the artist.

“You really do get a taste of who Mark Rothko was as a human being,” stated Larkin.

After reading just the stage direction for the play prior to reading the script, Larkin felt compelled to be part of this production.

With Shatterbox being a company that aspires to provide a type of theatre not commonly found in small communities, Larkin stated he knew things were going “to be exciting.”

“Pushing the envelope in theatre is one of those things that you need two things to do. First, you need a theatre company that’s willing to do that. Second, you need an audience willing to see it. We are finally at the point now where audiences are willing to come out and push the boundaries with us,” stated Larkin.

RED promises to unapologetically push the boundaries of theatre-and Shatterbox is doing so as a not-for-profit group.

“We don’t make a lot, but we can give a percentage back to the Regent, and if we get a little left over for our next show, we’re happy,” stated Papanicolau.

Tickets are $21 and available at the Regent Theatre Box Office or online. For more information or to purchase tickets online, please visit: https://shatterboxtheatre.com/.