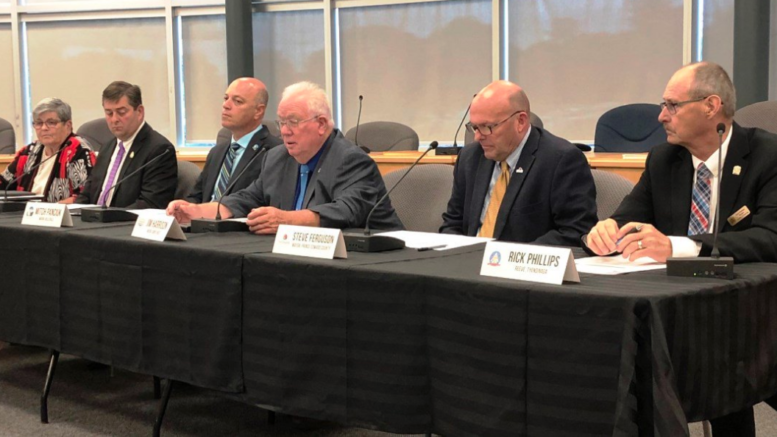 The elected leaders of six local municipalities-Prince Edward County, Quinte West, Belleville, Greater Napanee, Brighton and Tyendinaga-met Tuesday in Trenton to discuss concerns surrounding the local water levels and are calling on the International Joint Commission , the organization that controls water flowing from Lake Ontario and into the St. Lawerence Seaway,   immediately abandon Plan 2014 and revert to Plan 1958 which had the effect of keeping water levels in the lakes lower.

With the entire circumference of Prince Edward County being effected by this summer’s high water levels, Mayor Steve Ferguson and his colleagues including Belleville Mayor Mitch Panciuk and Quinte West Mayor Jim Harrison want the federal government to take action immediately to ensure high water levels like those experienced in the spring and summer of 2017 and 2019, respectively, don’t occur again.

“Just to put Prince Edward County into perspective, it’s the largest shore line on the north shore of the lake with about 500 km of water front, and to put that into perspective, some of our neighbouring municipalities, Belleville is 24Km, Quinte West is 35km, ect., ”Mayor Ferguson stated at Monday’s press conference.

Together, elected leaders identified five issues they will be working to seek direct action on to improve the future outlook of the water situation in the Bay of Quinte region and beyond.
1. They will request that the International Joint Commission revoke the Lake Ontario – St. Lawrence River Plan 2014 and reinstate Plan 1958-DD.
2. They will request the International Joint Commission take immediate action to reduce water levels and keep them down.
3. They will lobby the provincial and federal governments to improve support to property owners and provide them with immediate assistance.
4. They will also request that the provincial and federal government allow municipalities and property owners to take extraordinary measures to protect their properties, such as the ability to build larger, more permanent retaining walls.
5. They will call for a response from the International Joint Commission within 14 days of receiving their requests.

“I fully support this, the immediate revocation and importantly a response by the IJC within two weeks,” Ferguson said. “We have a considerable amount of planning to do, as I think everybody at this table does, because if we were to go through another summer like this years, it would continue to have a profound effect on our businesses, on our residence and our economy as a whole. I’m glad we gathered and we put a timeline on this and I hope we hear back from them in that time frame.”

Together, the group agreed that the current water levels have caused overwhelming damage to local infrastructure, public safety, and health. Individual municipalities are spending hundreds of thousands of dollars as a result of flooding, not including the devastating impacts on tourism and economic development.

“Our community relies very heavily on tourism economy,” stated Ferguson. “The net effect of the water levels we experienced this year were significant effects on our tourism accommodation, on our beaches and some of which had to be closed, on resorts and campgrounds where people might otherwise have visited and spent money at and subsequently spent money in other areas of our economy.”

The group made it clear they believe this flooding is a man-made problem — not a result of climate change. The mayors feel that the IJC is refusing to take responsibility and the regulatory international body needs to be held accountable.

“Clearly (Plan 2014) not working, we experienced flooding in 2017 as part of the implementation of this plan one year earlier,” Ferguson said. “We experienced worse flooding this year, so it’s anybodies guess what will happen next year, although we are preparing for at least similar circumstances.”

With more than 40 Ontario municipalities along the shore of Lake Ontario, and even more with watersheds that have been impacted, the repercussions of recent flooding have been felt across the province. This group of elected officials is calling on other municipalities to join together in a united effort to make a change.

“For me as a municipal official and for my fellow members of council and/or staff members, the most frustrating thing about this was no body appeared to be listening to our concerns.” said Ferguson. “There is all kinds of scientific explanation as to why this was happening but our frustration was we couldn’t get out into a boat and pull a plug.”