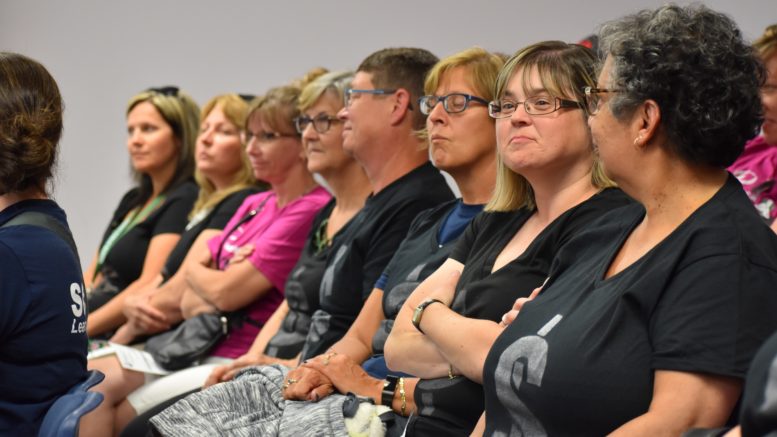 THE PRICE IS WRONG- Several CUPE Local 1022 members with tee shirts adorned with dollar signs sit in silent protest at a Board of Education meeting in Belleville in June, 2018.(Jason Parks/Gazette Staff)

Ontario school boards including the Hastings and Prince Edward District School Board (HPEDSB) have received notice that unionized support staff working under the Canadian Union of Public Employees (CUPE) will be participating in a job action starting today.

The Union employees include school front office staff, educational assistants and custodial staff who will all be working under ‘Work-to-rule’ memorandum after negotiations between CUPE and the provincial government broke off this weekend.

CUPE represents some 55,000 employees in 63 school boards across Ontario and are represented in the Qunite Area by Local 1022.

Sabre -rattling between the province and CUPE have been going on for months after the provincial government made a number of cutbacks and refused to address a number of safety student and employee safety concerns in negotiations over the summer.

“Minister (Stephen) Lecce says he wants stability and predictability, but we have yet to hear anything that says that he’s ready to secure the education services that students and families rely on,” said Laura Walton, president of CUPE’s (Canadian Union of Public Employees) Ontario School Board Council of Unions (OSBCU), which bargains centrally on behalf of the union’s 55,000 education workers. “That is what CUPE education workers are seeking from this process – not simply for themselves, but for the students they serve.”

The HPEDSB understand specifically that this job action will be in the form of a selected work-to-rule approach whereby specific duties will be withdrawn and not performed by CUPE during the work day.

Things such as cutting the grass, emptying outside garbage pails, cleaning hallways, gyms or offices, putting chairs up for any function (including election polling stations), preparing materials for class and things like head lice checks will be among the duties the school employees will not be partaking in.

However CUPE members have been told not to refuse to do anything that would put a student at risk or make a school unsafe.

“Students come first at HPEDSB and we have high expectations of all employees,” said Shannon Binder, Chair of the HPEDSB. “We respect the bargaining unit’s right to participate in job action and, at the same time, we are absolutely committed to student safety, and supporting continued student learning and achievement. We will continue to do our best at communicating actions and resulting implications for our schools, families, staff, and of course our students, as timely and responsibly as possible.”

Employees at HPEDSB who are being affected by the job action work in many different roles within the school board including, central and back office clerical, school-based clerical, communicative disorders assistants, custodians, educational assistants, early childhood educators, information technology workers, library technicians, maintenance and trades, student supervision monitors, speech and language pathologists, chaplains, IT workers, international language and ESL instructors.

“We’ve always said any job action we take will have at its heart the protection of education services for students,” said Walton. “And this year we’ve seen those services decimated: school libraries closed over students’ lunch breaks because there aren’t enough library workers; school cleaning cut to the point that custodians are told they can only vacuum kindergarten classrooms once a week; eight or nine students with special needs now supported by a single education assistant; communications with parents affected because some schools have lost their school secretaries, if it takes job action to restore these services, then so be it. This is something worth fighting for.”

Over the weekend Minister of Education Stephen Lecce issued a statement regarding the end to the latest round of talks and CUPE’s job action.

“It is deeply disappointing that CUPE has decided to end talks this weekend, and proceed with a partial withdrawal of services, despite a limited number of outstanding items at the table,” Lecce said.

In a Ministry of Education press release, it’s the province’s position the Crown and the employers tabled a reasonable offer with proposals to address compensation, job security and funding for additional staff.

Lecce said a key issue which remains is resolving rising absenteeism rates and the impact it has on students and schools and that the Ministry expanded their offer through the negotiations with one interest in mind: landing a deal which keeps the kids in class.

The Crown and the Council of Trustee’s Association (CTA) have been and will continue to negotiate in good faith the Minister added.

“We remain fully committed to resuming discussions with CUPE to reach an agreement quickly to provide predictability to parents and students,” Lecce expressed. “On my direction, through our mediator, we have asked for additional bargaining dates to bring everyone back to the table so that we can ensure our kids remain in class.”

During this period of job action, student safety will remain the utmost priority – a position all parties share.