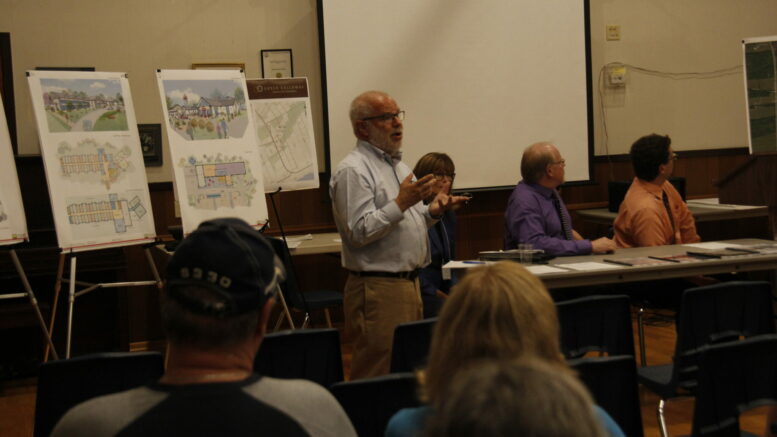 READY FOR REDTAIL EAST- Treat Hull, the project Manager of Redtail East, spoke to a crowd of about 50 people at Hillier Town Hall Wednesday evening and announced the start of a planning application that could see a nordic spa and resort built on Loyalist Parkway just south of Consecon. (Desirée Decoste/Gazette Staff)

The owners of Redtail Vineyards on Partridge Hollow Rd near Consecon are looking to expand their operation and offered a glimpse of their plans to the community Wednesday.

The Hillier Town Hall midweek as an announcement of a planning application for a new Redtail Winery (Redtail East) coupled together with a hotel and nordic spa was unveiled.

The session was an information meeting and not a statutory meeting under the Planning Act where the purpose is to seek input, address concerns, share information and answer questions. 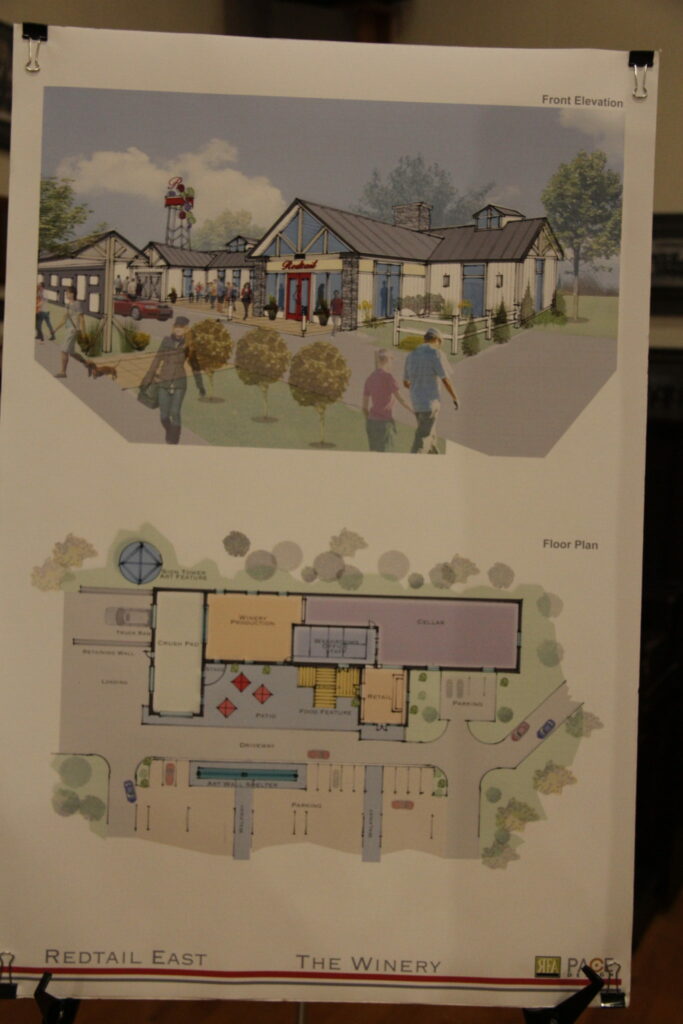 “The official plan governing land use in the county says a couple of things, on one hand it says the county needs resorts and wants resorts, and, on the other hand, it said resorts belong on shoreline,” Treat Hull, project manager said. “On behalf of Blocknote, based on areal photos and personal visits, I reviewed 51 potential spots in the west end of the county and there was no satisfactory shoreline available. In fact, the shoreline over the years despite the official plan has been broken up into building lots of about 10 acres, areas that would not sustain the winery and hotel/spa needs. I recommended they go ahead with the site we are currently discussing, bordering opposite Partridge Hollow Road and bordering Loyalist Parkway.”

The proposed accommodation would  be three km south of Consecon on the east side of Loyalist Parkway. The entire property is 58 hectares with three quarters of the site being utilized for winery purposes.

The project itself will be divided into two phases, the first phase with approximately 43 hectares would be the winery and would begin immediately with the planting of vines. The future phase or phase two will be the hotel and nordic spa on approximately 15 hectares.

In the official plan, that part of Prince Edward County is identified as a tourism corridor, which is a location where tourist services and activities and accommodations are encouraged to be located.

The winery will consist of production, storage, parking as well as  a small retail and hospitality room of about 1,800 square feet.

Wine making would commence in 2021 with offsite grapes and, by 2024, production of vintages grown and processed on the Hillier ward vineyard would start.

The winery building will have a steel roof, board and back siding with some stone features as well as a post beam entryway.

“There will also be a signpost, or a beacon if you will, that’s shown along Loyalist Parkway,” said Ruth Ferguson Aulthouse, president at RFA Planning Consultant Inc. who are the lead consultants on the project. “Because we feel this is an important site as one comes down from the 401 into Prince Edward County, and an art wall which would help be a venue for local artisans to display their works and would be a revolving art show if you will, that would be a set off from the patio from the hospitality area.”

According to planners, the winery itself conforms to the rural policies of the County’s official plan, which sets out what estate wineries need to consider. The winery will have its own services, water supply and sewage disposal area.

The second/separate phase of development of the hotel and nordic spa, will be approximately 50 rooms which is 25 per floor and would have 2,500 square feet of conference or meeting space as well as a 50 seat all-day restaurant, primarily for hotel guests but open to the public as well.

Amenities would include a pool, fitness room, gardens and outdoor patios associated with the central restaurant and meeting space. 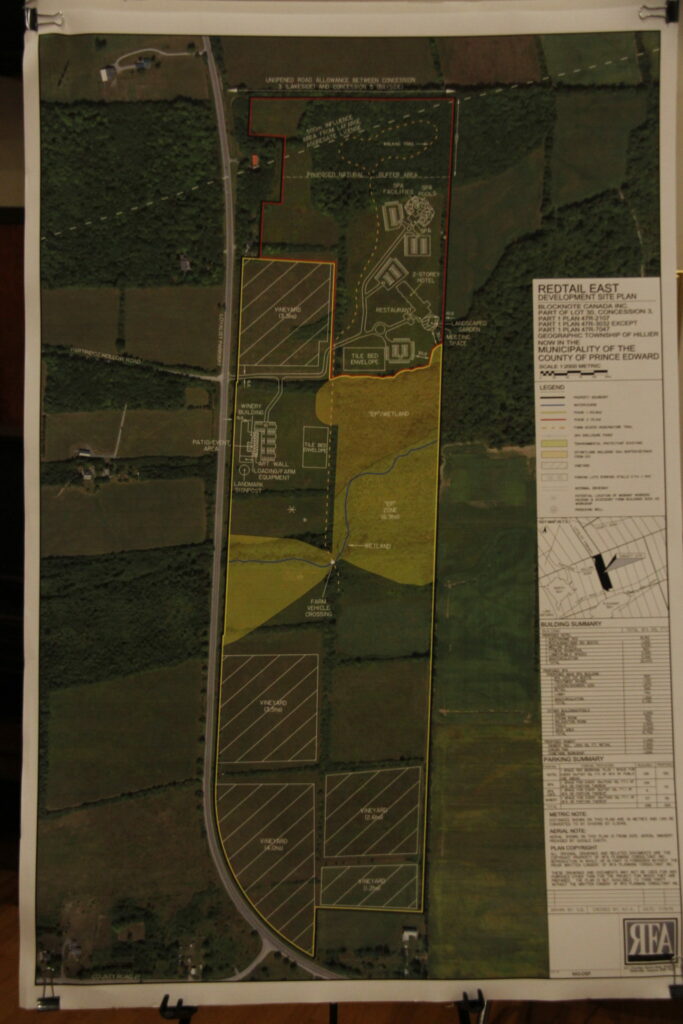 Parking for the hotel will be positioned in two separate lots so as to mitigate the impact of large parking lots.

“The hotel/spa had comprehensive research done to ensure it’s a viable idea and not just a pipe dream before significant investment is made,” Hull stated. “And on the estate winery, it was not felt that there was a question about whether the county is an attractive wine destination, we took that more or less for granted.”

The nordic spa would operate year-round with indoor and outdoor facilities. The building itself would be about 5,700 square feet and within will be treatment rooms, lockers, showers, small retail space, lobby and a 25 seat spa cafe.

Outdoors would have buildings with saunas, steam room, relaxation room and pools and deck area.

“The spa in particular would be important to create a year-round attraction,” Hull expressed. “Something that would bring people here when we don’t have other things to bring in visitors.”

The hotel and spa development will not begin until a hotel/spa partner is recruited and no time line is in place for the establishments to be erected.

It was noted Redtail owners want to be good neighbours and are open to receiving feedback.

The meeting concluded with many concerns  being voiced by local residents attending the information session.

Water table concerns were voiced by neighbouring residents as well as the location of the facility’s entrance off Loyalist Parkway.

Blasting at the nearby LaFarge Consecon Quarry disrupting those looking for a peaceful retreat was also a concern raised.

All documents pertaining to the proposed development are available from the municipality.