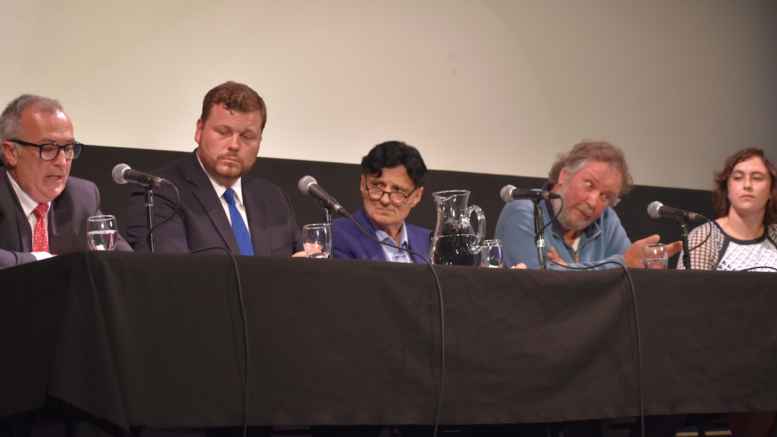 On Wednesday, the federal candidates for the Bay of Quinte Riding converged on the stage of the Regent Theatre in a debate hosted by the Prince Edward County Chamber of Commerce.

The event lasted two hours, wherein the candidates fielded questions from the local Chamber of Commerce and the Prince Edward Federation of Agriculture as well as members of the audience. Before responding to questions, the candidates took time to explain their platform and introduce themselves.

Incumbent Bay of Quinte MPP Neil Ellis  focused on the importance of supporting small businesses while also investing in infrastructure as being key elements to helping constituents of this riding succeed.

“The cost of infrastructure deficit outweighs the financial deficit in the long term,” said Ellis. “The people I’ve seen and helped over the past four years are one of the biggest reasons why I’m running for re-election.”

Tim Durkin is a fresh face for the Conservative Party, being a broadcaster by trade.

Durkin asserts that his professional training as a broadcaster taught him how to listen which has helped while talking to constituents on the campaign trail.

“Since we started this venture last April, we have talked to over 60,000 people and the same thing keeps coming up. And that is that people are getting by, but they’re not getting ahead,” stated Durkin, borrowing campaign messaging from party leader Andrew Scheer

“There’s good borrowing, but in the last 40 years we have had the largest deficit any Canadian Government has had in a time of war and in a time of recession,” asserted Durkin, adding that Plan 2014 needed to be reassessed as well.

Paul Bordonaro, the local candidate for the newly formed People’s Party, opened his comments by expressing excitement to be part of a political party that, as he states, is the fastest growing party in Canadian history. He focused on rallying support from the general population while explaining the platform of the newly formed party. Bordonaro cited four principles that guide the policies of his party.

“The People’s Party is built on the foundation of four core values…personal responsibility, individual freedom, respect and fairness,” he stated.

“The Conservatives and Liberals are globalists. We are nationalists,” said Bordonaro. “Our plan looks after all Canadians first, not the rest of the world. With a population of 37 million, we only represent half of the planet. Yet, somehow, our two main parties feel they can be the welfare state of the planet.”

Getting down to some details, Bordonaro states that his party would eliminate unnecessary foreign aid while focusing on humanitarian aid. He also stated that the PPC wants to put immigration in line with the needs of Canadians.

“The present immigration policies are costing tax payers billions of dollars a year and lowering our standard of living and quality of life. We want immigration reform to improve our country, not destroy it,” said Bordonaro.

Danny Celovsky, the Green Party Candidate, conceded that he gave some thought to opening remarks, but decided they were written better by Greta Thunberg, who recently spoke to the UN about climate change.

His speech, like that of Thunberg, focused on the need for action on climate change.

“The climate crisis was treated like every other issue or even less than that. We must admit that we do not have the situation under control. And, we must admit that we are losing the battle. We must stop playing with words and numbers because we no longer have time for that,” quoted Celovsky.

Last but not least, in her opening remarks Stephanie Bell touched on several policy platforms put forth by the NDP.

Like The Green Candidate, Bell invoked Greta Thunberg in her opening remarks, lauding Thunberg’s efforts to bring more attention to climate change, meanwhile decrying what little has been done about this issue.

“I’m sure many of you, like me or like Danny, were struck by how much we haven’t done-that we had let her (Greta Thunberg) down. That she was right. It reminded me a lot of myself as a child, actually,” expressed Bell. “I’m so disappointed that I haven’t made more of an effort for her and her generation…and so, her speech has really motivated me again today, and this week and at this time, to be and to say again, we have to deal with climate change.”

Questions were moderated by Paul Martin with each candidate given fair time to respond. The first question was posed by the Chamber of Commerce, who asked what each candidate what their party would do to invest in vital, rural infrastructure.

“The current federal government made investing in infrastructure a priority. Most of the investment appears to be focused on urban infrastructure,” stated the chamber.

Responding first to this was Durkin, who reiterated the lack of federal funding for local infrastructure.

“We hear the numbers that are thrown around about investments and infrastructure in this riding. I’ve talked to the mayors. Those numbers are not for your roads or your sewers or your bridges,” stated Durkin, citing Highway 49 and other roadways in the BoQ that are in desperate need of repair.

Bordonaro took his answer in a different direction than Durkin, drawing attention, instead to what he feels is a lack of “follow-through” by the federal government with regards to funding.

“We’re all concerned about affordable housing…but the problem is, it isn’t just money, because the government often hands over money-for example, provincially, they hand it over to every board of education and they don’t follow the money,” he stated, adding that he would try to expedite programs when money was delivered.

Celovsky emphasized that while more money does need to be spent, Canadians need to be careful what infrastructure they support.

The local Green Candidate believes now is the time to make sure the emerging green infrastructure sector has a presence across Canada, in both rural and urban settings. Celovsky also believes that doing so would create jobs and subsequent prosperity across the country.

“We have to get our share of that opportunity and that comes from leading. I would rather be a leader than a follower. And, my proposition is that we lead. And, that involves three levels of government working together, not one in isolation,” argued Celovsky.

Speaking to the need for better rural infrastructure, Bell touched on the need for affordable housing as being at a crisis point. “I’m so glad to be working with a party that is committed to building 500,000 affordable homes if elected. I’m also excited that they’re talking about expanding all rural high speed broadband as soon as possible,” stated Bell.

Among the other infrastructure changes the NDP are proposing, as Bell points out, is reliable public transportation.

Bell further stated the NDP have a plan, ‘The New Deal for People’, which offers green solutions for delivering the infrastructure, as opposed to relying on methods that may be less effective and more polluting.

Ellis pointed out the Liberal Government has delivered $33 billion in funding, across various streams, since being elected.

However, Ellis also notes  the process of infrastructure funding is not entirely up to the federal government with the provinces ultimately deciding where the allotted money goes.

“The process of infrastructure funding is not entirely, as I’ve said before, in the federal hands. Applications are submitted to the province for review, the province then makes recommendations and prioritizes projects for the federal level of funding approval,” stated Ellis. “Prior to the start of the election, I was working with both the Minister of Rural Economic Development and the Minister of Infrastructure and Communities. We determined that with Doug Ford’s government, the province did not prioritize our local projects and therefore there is a waiting process wherein the applications are under review.”

“Supply management is a huge factor for our operation. What are you going to do to defend supply management when Canada is negotiating trade agreements with countries who want to access our market for dairy, chicken and eggs? How do you intend to compensate Canadian producers who have lost revenue to the agreements that have already taken place, and make it in a timely manner?” Williams wondered. Bordonaro was quick to respond that the People’s Party intends to abolish supply management.

“Our position may not be favourable to you, but it is what it is. We intend to abolish supply management. It will help consumers by making dairy and poultry cheaper for a lot of people. There are a lot of families suffering out there with the cost of living. Over a five year period, we would compensate the farmers for their quotas. We would open up the markets by removing the inter-provincial trade barriers,” stated the People’s Party Candidate.

Celovsky stated that farmers seem to be happy with supply management, so the Green Party would rather not “mess with it”.

“The concern here is about bringing in other agricultural products from other parts of the world, which affects the supply chain system and is either going to reduce the quota volume or drop the prices,” said Celovsky. “What I’d like to do is tinker with it a little bit and see if we can get our local farmers to supply us locally.”

Reading from the NDP party platform, Bell asserted that her party was fully prepared to protect the supply management system.

“We’re interested in farm entrepreneurs and making them be able to innovate and grow. We will evaluate all potential trade deals for their social, environmental and gender impact on Canadians,” quoted Bell.

The NDP candidate also added that she believes there is value in being able to shop locally for Canadian produce.

“I just like being able to go to the grocery store and buy eggs, milk and cheese that came from Canada,” she stated.

“We also support high tariffs on non-domestic goods coming into Canada to ensure a market for domestic dairy,” stated Ellis.

Durkin stated the need for supply management as well, citing health concerns and other quality related discrepancies between domestic and non-domestic agricultural products.

“There are a couple issues, one is the standards for milk (elsewhere) are not the standards you have in Canada. On top of that, spent fowl have been found coming in. Spent fowl is a hen that has laid eggs all her life. It’s not meant to be meat-but they’re coming in with meat birds and that’s unacceptable as well,” stated Durkin.

Durkin also stated that when farmers lose trade deals, it is important they receive “back-end” money from the government.

With members of the audience lining up down the aisles of the Regent to ask questions, several candidates offered their time after the debate to field any unanswered questions.