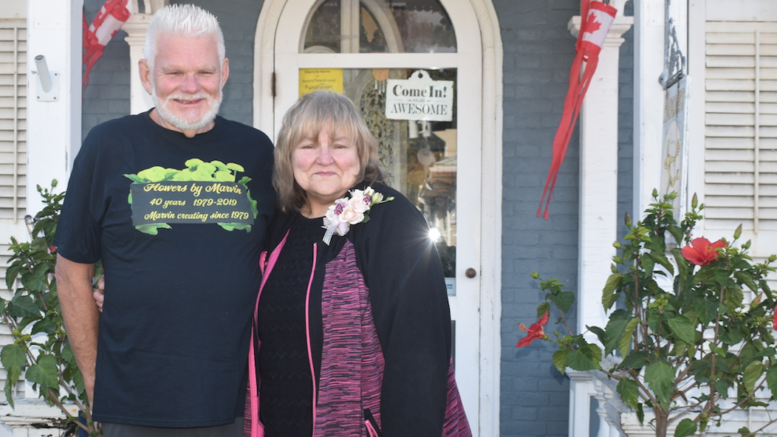 FLASHBACK - (L-R) Marvin Chapman stands proudly beside his sister, Eleanor Cooper, who stood with him 40 years ago at the opening of his flower shop. (Sarah Williams/Gazette Staff)

Though many businesses have graced Picton Main Street in the last four decades, few have become the mainstay that is Flowers By Marvin. Friday, Sept. 27  marked 40 years of businesses for the local flower shop.

Gathering to celebrate the occasion was proprietor Marvin Chapman along with a handful of guests, employees and Mayor Steve Ferguson. 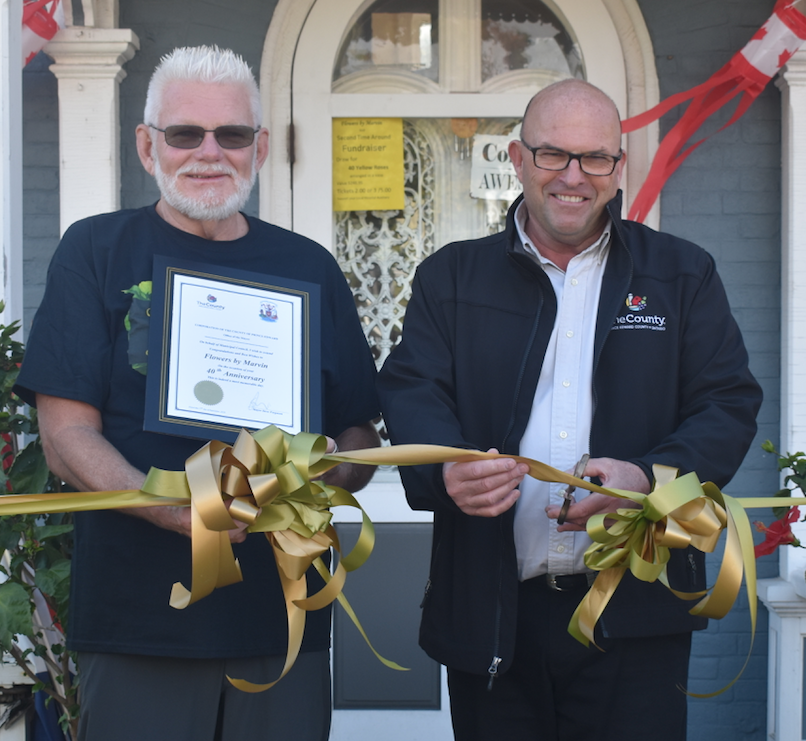 “It’s absolutely amazing and the support from the public…just-wow,” enthused Chapman, describing how it feels to have been in business for 40 years.

Chapman describes his entry into the floral business as being on a whim. He had been working three jobs in 1979-two at separate flower shops and also running the drive-in theatre. One day, as Chapman puts it, he decided to call Audrey of Audrey’s Flowers in Stirling and asked for advice about opening a business.

“That was on a Tuesday and by Thursday, I was open for business,” laughed Chapman.

Though the move to open a flower shop may have been on impulse, Chapman’s ability to make beautiful floral arrangements came naturally.

“I always liked flowers, but I went through for landscaping at Humber College. I did one semester then decided I wanted to do flora culture instead,” said Chapman. “Within two weeks, I was doing what everyone else was doing-only they had been studying flora culture since September.”

In the four decades Chapman has been in business, the floral industry has changed considerably.

“Right now, the availability of our product is everywhere. Back in the day, the only place you could buy an Easter Lily, for example, was a florist or a greenhouse. Now, the only place you can’t buy flowers is at a doctor, dentist or lawyer,” said Chapman. “They’re in every convenience store, Home Depot-everywhere.”

The uptick in cremation versus traditional burial has also affected Chapman’s business. As he explains, with funeral home visitations being exchanged for celebrations of life, there’s less demand for floral arrangements.

The millennial penchant for farm-to-wedding flowers has also caused growing pains for Chapman. As he states, there are now growers who specialize in flowers, with arrangements geared towards this age group and their desire for a more “natural looking” aesthetic.

Nonetheless, Chapman has persevered and diversified. And though his stock has expanded to include soaps and candles, business will be blooming as long as people love flowers.