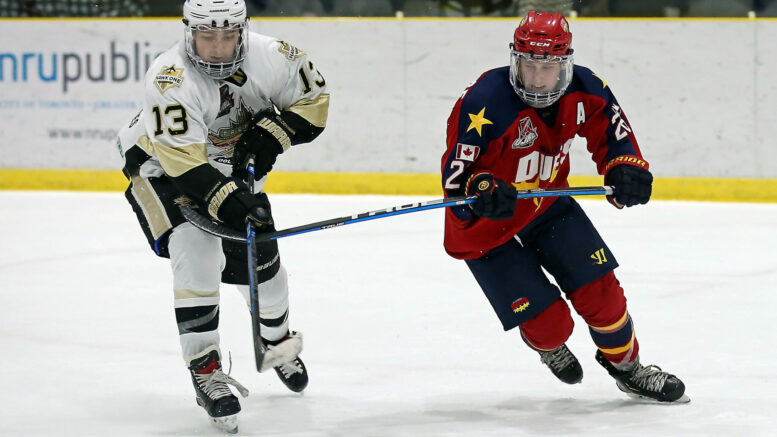 The Wellington Dukes improved their record to 9-2-0 with a pair of huge one goal wins over divisional opponents this weekend, outlasting the visiting Trenton Golden Hawks in double overtime 4-3 on Sunday afternoon before travelling to Cobourg Monday night and shading the Cougars 2-1.

At 18 points, Wellington leads the OJHL in that department however, the Burlington Cougars and Oakville Blades have games in hand on the Dukes and those West Division squads have posted higher winning percentage rates.

But nonetheless, the Dukes has shown resiliency and determination in the face mounting injuries and their coach couldn’t be prouder of the way the team has fought through the tough times early this season. 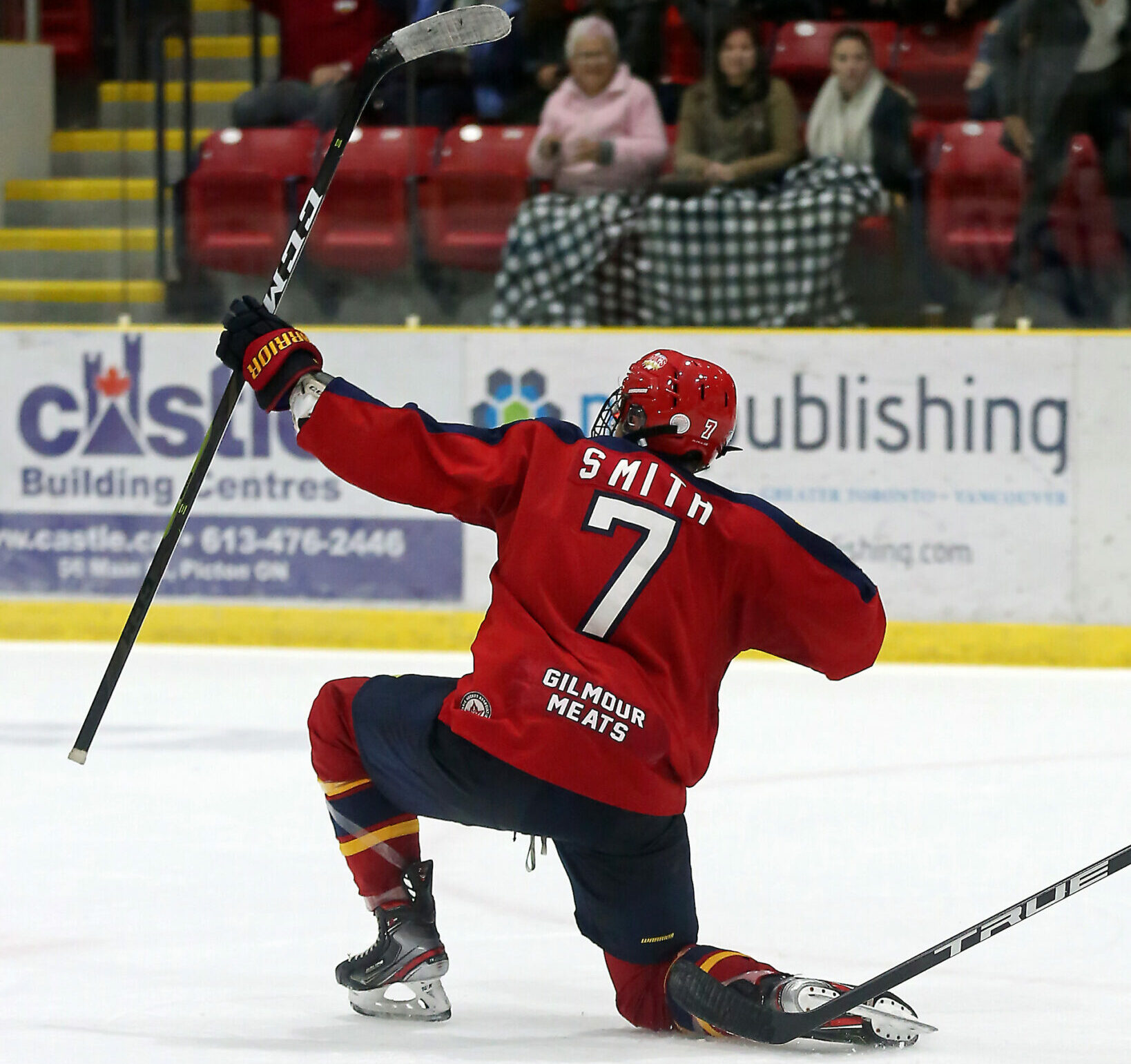 “Im very pleased with the way we have stepped up as group and faced the adversity that’s come our way this early on,” Derek Smith told the Gazette Tuesday. “Some of our players have taken it as a real challenge and have stepped into larger roles than maybe what was expected of them at the start of the season but we have lots of character in that dressing room and we’ve been able to grind it out so far.”

Wellington has been without their captain Ben Evans who has sat out the last half dozen games with migraine issues.

After getting treatment, Evans is listed as day-to-day and Smith said the Thorold, ON native could return to the lineup this weekend.

Defenceman Noah Massie played the first two periods of Wellington’s opener against Brampton back in early September before colliding awkwardly with an opposing player.

Felled with an upper body injury, Massie could also return to the Wellington lineup this weekend and is day-to-day.

Forward Tanner Tolliver is also thought to be close to returning to the lineup.

However, centreman Evan Miller who came into the Wellington lineup at the start of the season and was one of the most electrifying players in the OJHL in the opening weeks will likely be out until mid-December with a leg injury sustained Sept. 18 in a 3-2 loss to the Toronto Jr. Canadiens.

“It’s tough to lose Miller because he was off to such a hot start and this is a big year in his development and his hockey future,” Smith said. “He’s a great player and great person as well and we looking forward to his return to the lineup.”

Doing without seems to be ok for the Dukes however as the club shook off a lopsided loss at the end of the 2019 Governor’s showcase to pick up a pair of vital wins this weekend.

On Monday at the Cobourg Community Centre, Wellington received outstanding goaltending on the part of Matthew Dunsmoor.

The Guelph, ON native made 14 stops in the third period and 31 saves overall as the Dukes slipped past the host Cougars 2-1.

The Dukes took a 1-0 lead just over five minutes into the game as former Cougar Jacob Breckles blasted home his second of the season thanks to a pass from Jacov Vreugdenhil.

Jason Stechelback had the only goal of the second frame as Cobourg was able to tie it up at 1-1 just under four minutes left in the middle stanza. 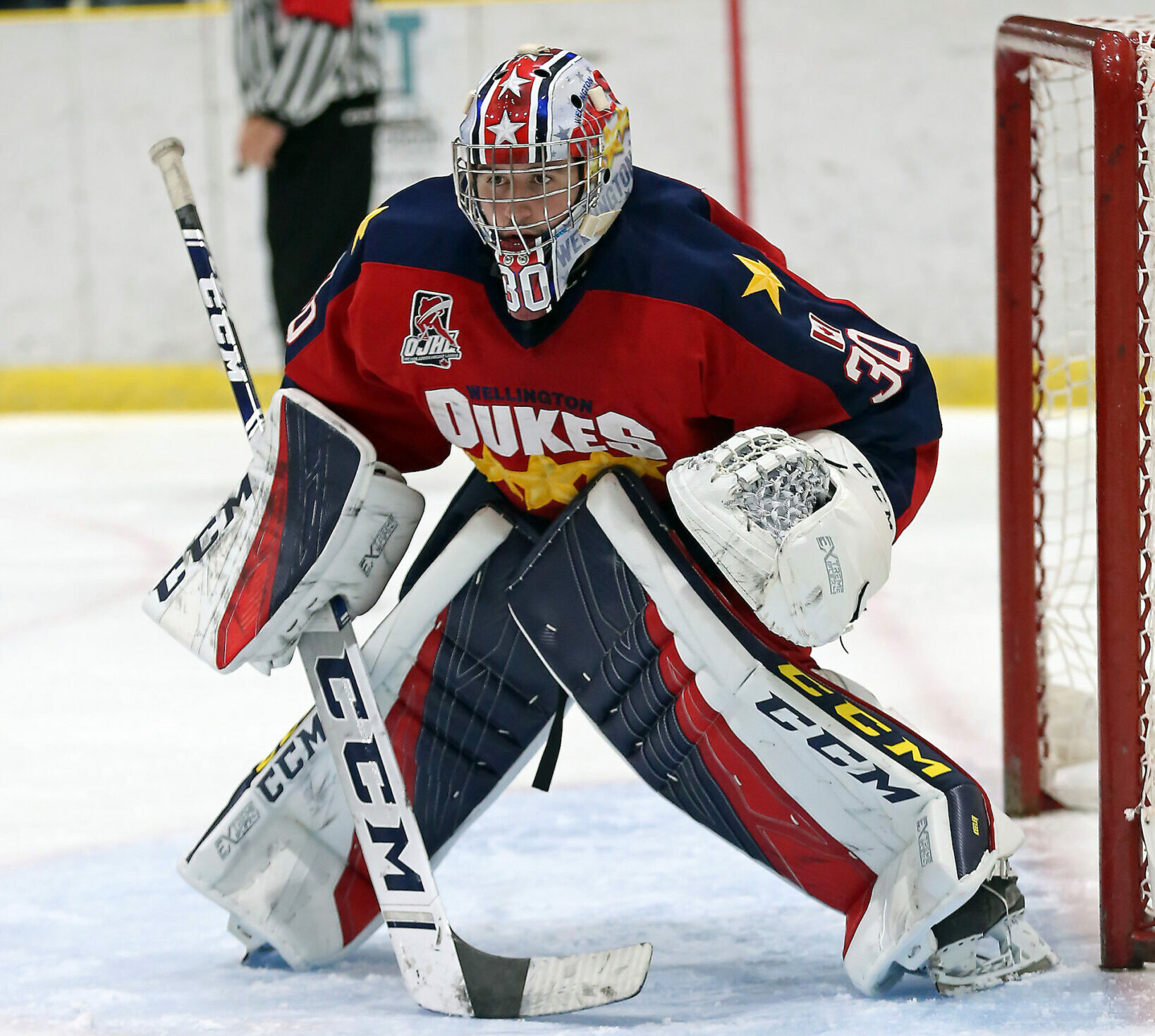 In the third and inside the final ten minutes of play, Ben Addison would spring Dawson Ellis for the game winning marker at the 12:33 mark of the period.

Cougars head coach Jerome Dupont would lift starter Dershahn Stewart in the late going but to no avail as Dunsmoor denied Cobourg a game tying tally.

“Things aren’t alway going to go our way and Monday was a perfect example of us sticking to the game plan, not getting down and grinding out a good road win,” Smith said. “Dunsmoor made some big saves for us when Cobourg got into the prime scoring areas and kept it tied at 1-1, giving us a chance to pull ahead later in the third.”

On Sunday, rookie netminder Matt Keeley had a tough time with a pair of seeing eye shots from the blue line but managed to show some confidence and poise despite the visiting Trenton Golden Hawks jumping out to a 3-0 lead in a ten minute span partway through the second period.

After stopping all 16 Trenton shots in the first, Sam Duchesne and Colin Van Den Hurk each victimized the Dukes with point shots at 3:43 and 6:41, respectively, of the second.

Later in the period, former Wellington Duke Dalton Bancroft would beat Keeley up high at 13:00 to extend the Trenton lead to 3-0.

But cue the Wellington comeback.

Ben Woodhouse would start beautiful rush in his own zone and wind up batting a puck home in the slot, beating Trenton starter Anand Oberoi at 18:05 of the second to give the locals some life.

In the second, Wellington was quick to the puck early and Jake Gagnon would take a smart feed from Frank Vitucci and go in on Oberoi.

Gagnon would go low on the Trenton goalie for his league leading ninth goal of the season just 97 seconds into the third.

Wellington would fire 14 shots at the Trenton net in the final frame and it  would be Quinn Hanna taking the puck off a Vitucci offensive zone face off win while on a power play and ripping a puck off the cross bar and into the Golden Hawk net with 1:43 left to make it a 3-3 tie.

Just as it was a former Duke hurting his old club early, a former Golden Hawk making his debut in the Wellington colours came back to hurt Trenton.

Into the 3-on-3 part of overtime, Smith collected a loose puck off the face off and beat a stunned Oberoi between the wickets with a backhand for the game winner.

Smith has been on the shelf to start the season due to suspensions incurred in the 2019 Jr.B playoffs last spring and for flipping the puck over the glass during a preseason game in Trenton.

“We are so happy for him, it’s been a long time to be sitting out to start the season and I don’t think there was anyone happier in our room after the game,” the coach said.

As mentioned above, Wellington struggled in their second loss of the season last week in Buffalo, going down to Burlington 7-3.

The teams traded goals in the first with Gagnon and Hanna counting for Wellington in a 2-2 score after 20 minutes but three unanswered by the West Division Cougars was too much for Wellington to overcome.

Vitucci would score to make 5-3 with just over 12 minutes left in the third but former Duke Brendan Rylott had the dagger at 11:08 to make it 6-3 for Burlington.

Wellington looks outside the east division this weekend, hosting Collingwood (Formerly the Kingston Voyaguers) on Friday night before heading to Brantford on Sunday for a 4 p.m. puck drop.