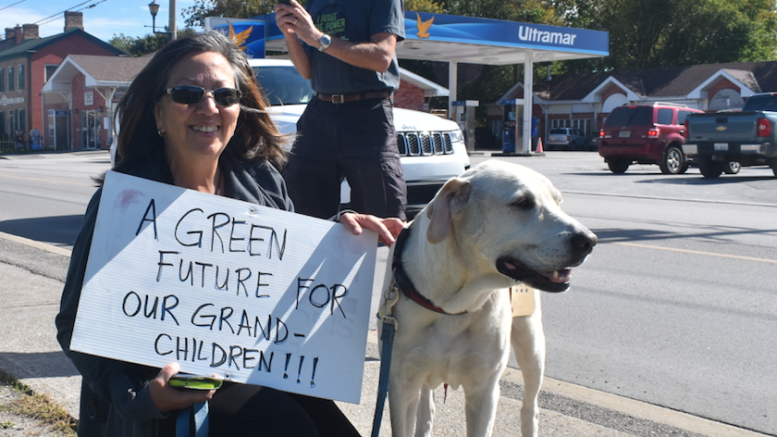 ALL CREATURES GREAT AND SMALL - Eileen Manpili and her dog, Diego, joined the protest on Friday to draw awareness to the effects of climate change. (Sarah Williams/Gazette Staff)

Canadians across the country drew attention away from party politics last Friday and towards an issue that affects us all-climate change. Protests occurred with people attending in droves from coast to coast. Here in Picton, a fair sized protest was staged on the corner of Washburn and Main Sts.

Among the many protestors, the sense of hope and need for change was strong. Many held placards as cars drove by, honking in support.

In the wake of mounting environmental concerns, protests took place around the world with Canadian protestors numbering in the hundreds of thousands including large scale protests in Toronto, Montreal and Vancouver. Local organizer Don Ross took some time to speak with the Gazette about the impetus and logistics behind this event.

“We’re here to support all the activities happening around the world to raise awareness about the urgency of climate change,” said Ross. “We have a climate crisis in the world and Prince Edward County, last I checked, was still on the map.” 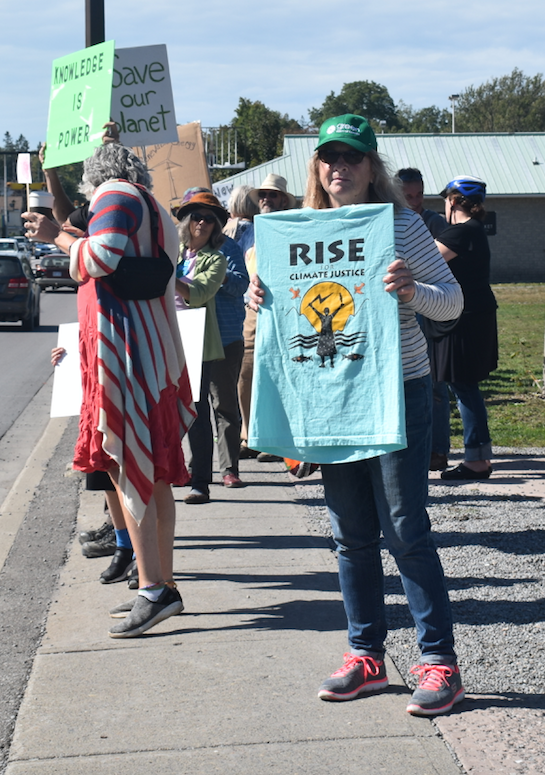 Ross explains that, although the world protested on Friday, there have been small acts of resistance locally. And when he heard two of his compatriots Angela Lammes and Annette Macintosh were protesting alone last Friday in Picton, he decided they needed support.

“The result today is a fairly hastily thrown together event and I think we’ve got probably 50-75 people here. The idea is to raise awareness so that people who maybe don’t want to pay attention will realize there’s a lot of people who care and maybe they should start caring too,” expressed Ross.

“The idea is there’s going to be a tipping point that happens, not only with climate but also with awareness,” he added.

“That’s where the public has to get engaged and get involved. We’re trying to raise awareness of that,” stated Ross.

For Ross and his wife Heather, who have three children and four grandchildren, the hope for lasting change will follow them to the grave.

Pointing to a placard that reads, ‘We’re the problem, we’re the solution,’ Ross states he believes the answers to our climate issue are available.

However, in order to be actualized, Canadians will have to overcome the status quo.

“The status quo is the biggest enemy of change. If we just embrace what is known (about reducing the impact of climate change) the future will be, I think, brighter than it is now,” said Ross solemnly.

Though the effects of climate change locally are still hotly contested, there were those at the protest who had experienced first-hand the dire effects from a changing climate.

“In the Philippines, where I grew up, we saw the devastation that can happen when big business takes over a country. There was terrible deforestation. Our coral reefs were devastated as well, with about 80 per cent gone,” said Eileen Mapili.

The Philippines is well-known to be extremely vulnerable to climate change, with rising sea levels, rising temperatures and extreme torrential rains being just a few of the effects found there.

Mapili has a granddaughter that was born in August. Referencing this, she had to choke back tears as she described her worry for the future of the environment and for her granddaughter.

“It actually makes me cry when I think about what kind of future she will have,” stated Mapili.

Still, Mapili, as with the other protestors, expressed optimism and hope in light of the recent attention paid to climate change by the likes of Greta Thunberg.

“Greta is an amazing young lady-the light and inspiration so many people need. There have been many people throughout the generations who have tried to make changes but I’m really hoping this is the one. I think millennials have woken up,” she said.

There is no doubt that climate change is unbiased with regards to who is affected, which is why many are calling on all political parties to address this issue without prejudice.

“I’m just hoping that all political parties can realize how much this issue means to Canadians and we can have non-partisan approaches and acceptance of solutions. It is a moment of great opportunity,” stated protestor Julianna Hobbs.