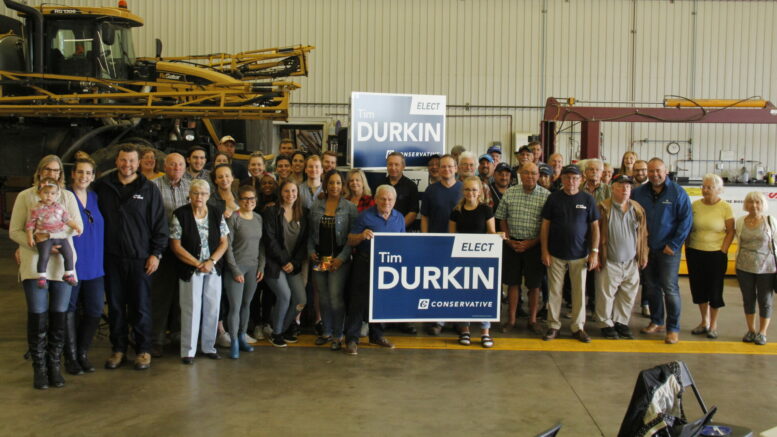 Bay of Quinte Conservative candidate Tim Durkin met with Prince Edward County-based party faithful at Reynolds Farms last week, introducing himself and promising to be a loud and clear voice for local constituents in Ottawa.

Eschewing a satellite  office in Picton as has been the norm for Conservative (and other political party) candidates, Durkin and his team have chosen to have one central office in Belleville and host rallies such as the one north of town last weekend.

Before Durkin spoke, he was introduced By Bay of Quinte MPP and Minister of Children, Community and Social Services Todd Smith.

“It’s great to see so many people out here today on a beautiful Saturday morning,” Smith said. “I’ve known Tim (Durkin) since he was just a little guy, he was a student at Nicholson Catholic College, he was a co-op student in Quinte Broadcasting and has done pretty much everything in the area when it comes to broadcasting. He’s helped so many different community organizations and charitable organizations. He is not an inch deep, this guy has a tremendous, tremendous moral compass, and he is going to do an outstanding job as the next MP for Bay of Quinte.” 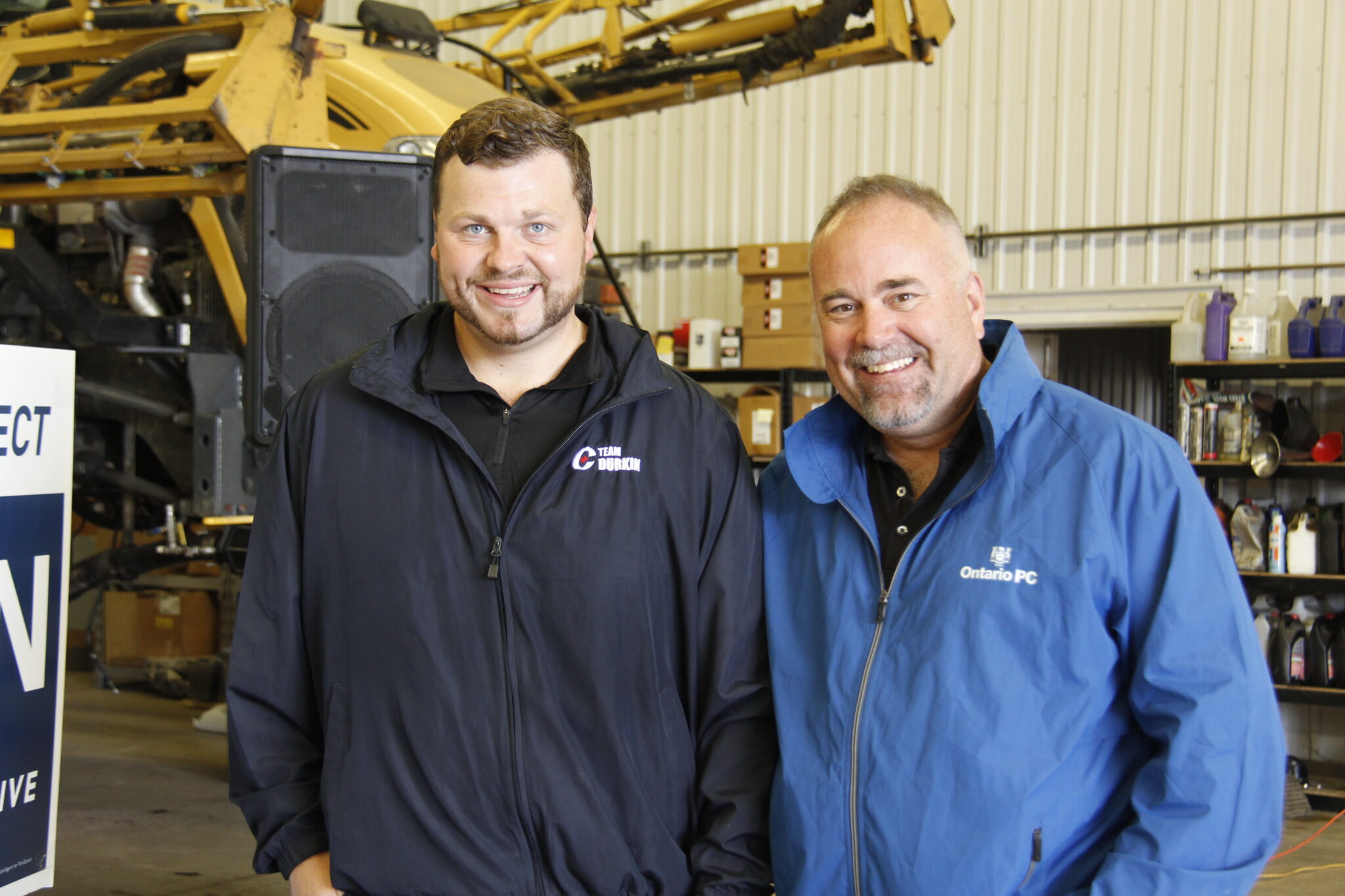 To introduce the candidate to the floor was Gary Fox, former MPP for Prince Edward Lennox & Addington, local farmer and director on the Ontario Sheep Board.

“Tim (Durkin) has spent all but one year in this area and grew up in Tyendinaga,” said Fox. “After a year away in the North West Territories for his first journalism job, he returned to the area to work in radio. He’s an impressive kind of a guy whom I met about a year and a half ago at a political function. I had heard him on the radio several times but had never met him.”

The Durkin team have gone to over 40,000 doors, passed 62,000 people and added another 3,000 Saturday as a crew from Toronto travelled down and walked door-to-door.

Durkin stated when the last conservative government was in power in this area MP Daryl Kramp brought in tens of millions of dollars in infrastructure money to this riding.

“Our provincial government has also brought millions of dollars into this riding,” Durkin said. “During the last debate the other day, the liberal candidate here said they brought in $375 million dollars in infrastructure to this riding, I’m going to be looking into those numbers and finding more about them as barely any of that money has been seen.”

Some of the issues Durkin touched on included pledging that climate change is real and we all share a responsibility to care for the environment.

Scrapping the carbon tax as it’s not an environmental plan, running a campaign on policy not personal attacks, being pro immigration and refugee when people come to Canada under the proper processes and channels and a society of lawful citizens were some of the points made by Durkin.

“I’m running because I believe, I believe I can make a difference, I believe real leadership means service, it doesn’t mean photo ops or standing in front of a line or cutting ribbon,” Durkin expressed. “I believe in telling the truth and acting with integrity and improving upon myself. Integrity means you treat people with fairness and respect they deserve, it means you run a campaign that’s run on policy and not personal attacks.”

After Durkin voiced what he believes in for himself and the Conservatives, he continued on with what he promises for the people.

“I promise it’s a short list,” stated Durkin. “I will never make a promise I can’t deliver. I promise I will work hard and listen to you, I promise to represent the Bay of Quinte with passion, integrity and honesty and I promise to be accessible. I’ll be your representative in Ottawa, not Ottawa’s representative here. I promise the house of commons will hear me being your loud and clear voice and I promise the house of commons will very easily be able to see me, which most can from a distance. We believe in people in the Bay of Quinte and believe in the great and beautiful country of ours.”

“And one thing that has not been talked about this whole election campaign as the government doesn’t want to talk about it, is plan 2014 which I promise to look into.”