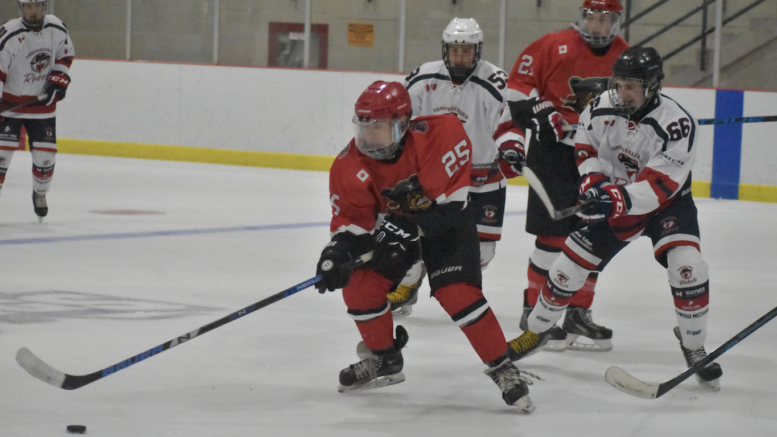 The Picton Pirates didn’t have a friend in the Provincial Junior Hockey League’s schedule making office this weekend and it likely cost them at least a point.

After sweeping the Campbellford Rebels in a home-and-home series Thursday and Saturday night, the latter of which took place at the Campbellford-Seymour Arena, the Pirates were back on the bus to the foothills of Central Ontario early Sunday morning to take take part in an afternoon game in Port Perry against the Mojacks.

Given their druthers, the Pirates would have likely braved a snow storm in January than play two lengthy road games requiring bus rides less than 12 hours apart but such is life in the PJHL.

Picton would play well despite a depleted bench but a second period where they exhibited fatigue cost them and the Pirates would be dealt a 3-2 setback.

The 2-1-0 weekend moved Picton’s record to 4-4-0, good for eight points and a tie for third place in the Tod Division with the Amherstview Jets. 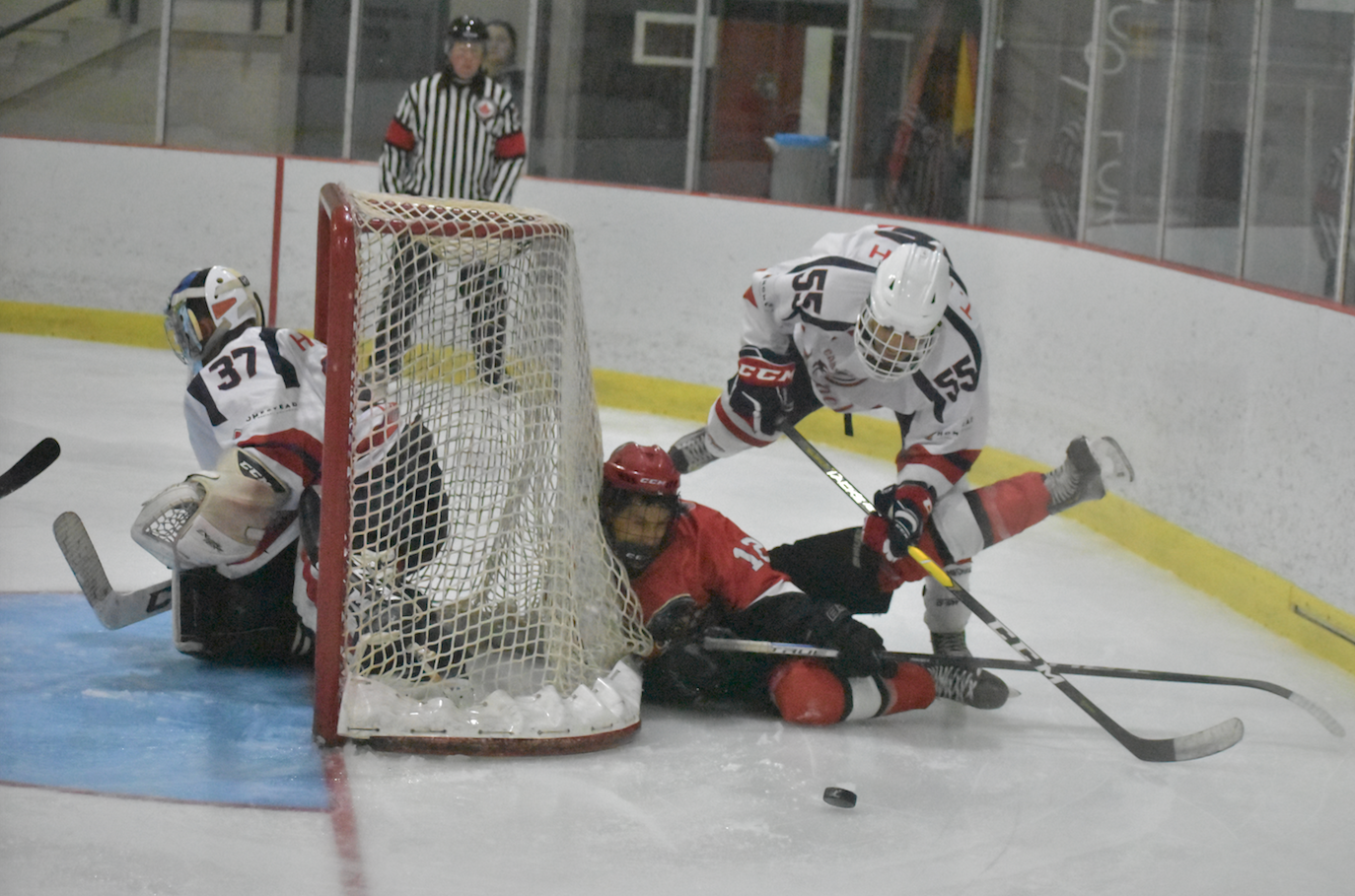 “We were pretty happy with the effort level we had Sunday in Port Perry,” Pirates Head Coach Tyler Green told the Gazette Monday. “We were dealing with a shortened bench and shorter rest but I thought we controlled large parts of that game.”

On Sunday the Pirates would get off to a hot start as Owen Dever converted a Nick Kirby-Palliser feed 3:59 into the first to stake Picton to a 1-0 lead.

Picton doubled up on their lead just under six minutes later as Garrison Moore bagged his first junior hockey goal off a Nolan Dawson pass at 9:35 to make it 2-0.

The Mojacks got one goal back at the 14:40 mark thanks to Carter Thornton.

In the second, the Pirates were on their heels for most of the frame.

“The game the night before started to show up and we got into penalty trouble,” Green said.

Nicholas Chokrev-Cerpcnjak would tally at 5:54 of the second to make it a 2-2 game.

Down 5-on-3, Picton was literally a second away from escaping the scenario before Spencer Robinson scored just as two Picton skaters were emerging from the penalty box.

Green credited Mojacks netminder Corey Kupyers as a reason why Picton wasn’t able to find an equalizer in the third frame as the Whitby native stymied the Pirates’ shooters over the final 40 minutes, making 24 saves en route to his second win of the season.

Erick Tessier had 31 saves in the loss. 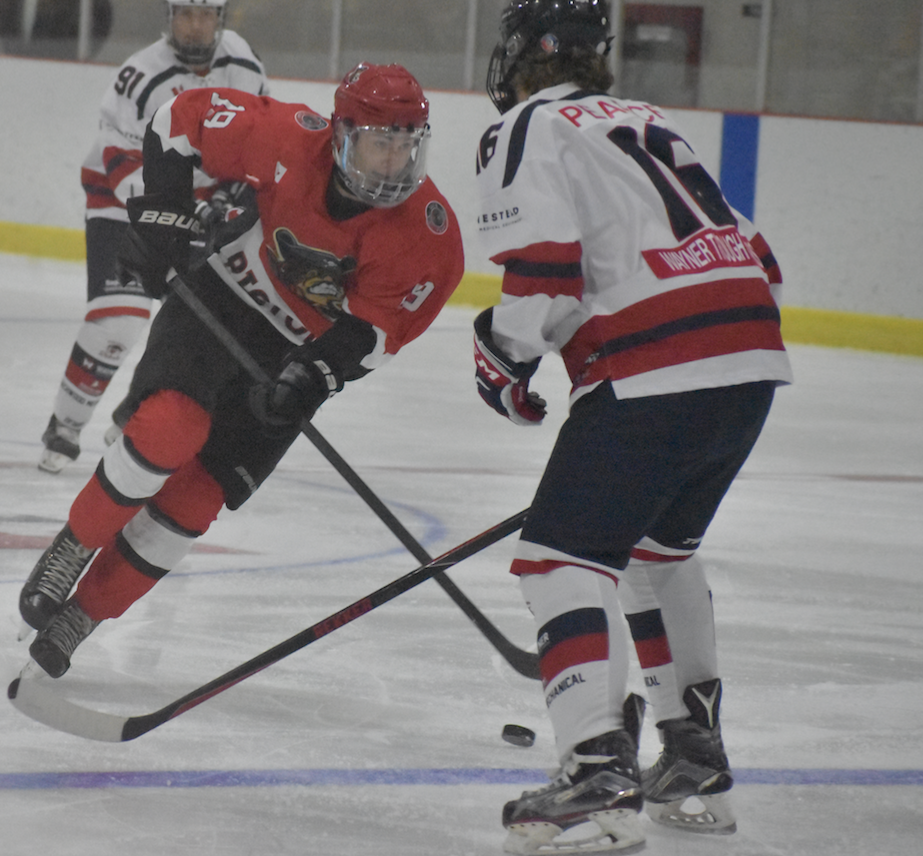 Picton probably wished some of their offence carried over from the previous night as the Pirates exploded for a dozen goals in a 12-2 thrashing of the host Rebels.

“I think the team got the message that our start on Thursday wasn’t nearly good enough and we weren’t about to let one get away because of a bad start,’ Green said.

Picton’s Brennan Bush was victim of a bad bounce as Mathieu Piazzi’s bank shot beat the netminder at 3:43 of the first but locals responded in a big way.

The Pirates would score half a dozen goals in a span of just over 13 minutes to effectively dismantle the hosts.

Hamilton-born blue liner Jacob Dietz bagged his first junior goal in the period and then scored another for good measure.

Derrick Vos, Griffen Conger, Dever and Adams would also light the lamp for the Pirates who out shot the Rebels 26-5 in the most lopsided period Picton has played this season.

With nearly every game so far for Picton having been decided by a goal or two, Green admitted it was an odd yet nice feeling to not have to continuously look over his shoulder and wonder about a come back from the opposing team.

Conger would count a shorthanded goal to start the second and Cowan would find the scoresheet thanks to a nice feed from Moore.

Campbellford’s Caleb Summerfeldt would respond with a goal at 9:07 to interrupt a string of eight consecutive goals but the Pirates weren’t finished in the second stanza.

Veteran Kurtis Wood would score his first of the season at 12:45 and then Khaden Henry bury a goal to go along his two helpers tallied in the first.

Henry would beat Micheal Brassor who took over for starter Kyle Hayes 6:50 into the first period after Picton’s third goal.

Kirby-Palliser would convert an Aiden MacDonnell pass at 17:33 of the third to make it a 12-2 final.

The play of Campbellford’s Hayes and a lackadaisical start by Picton kept the contest at Huff Estates Arena close before the Pirates finally sorted themselves out midway through the second.

“For the first and part of the second, our best player was our (Prince Edward County Kings Midget) Affiliated Player Ross Maycock. He definitely came to play but the rest of us didn’t,” Green said.

Campbellford’s Benny Scarr came roaring down the wing and beat Tessier clean for an early 1-0 lead.

Picton’s Matt Poole would get the game back to square as his effort at 14:22 beat Hayes to make it 1-1.

Tessier was tough on Cambellford in the second and denied Rebel Ben Krauja on a penalty shot.

Picton’s Henry would jam home a goal at 16:18 of the second to give the Pirates their first lead of the contest.

Poole bagged his second goal of the game part way through the third, sending home a Dietz pass at 13:13 to make it 3-1 Picton.

But the Rebels regrouped and Caleb Trotter’s effort at 15:52 got past Tessier to get the game to within a goal.

Kirby-Palliser’s effort into a yawning Campbellford cage with 1:21 left wound up being the game winner as Andrew Moran would score for the Rebels to get the game to 4-3 with 27 seconds left.

The Rebels were able to regain the Picton zone in the very late going but the Pirates held on to run out the clock and seal the win.

ON BOARD WITH THE PIRATES: Picton was without Cooper Rogers or Vos on Sunday as Rogers had the flu and Vos was recalled to the Wellington Dukes for their game in Brantford. After playing Thursday for Picton, Vos was in Wellington on Friday night and had an assist, setting up former Pirate Landon McLellan for a goal in the Dukes’ 7-4 win over visiting Collingwood. Vos then played In Campbellford on Saturday and then travelled with Wellington on Sunday to Brantford for a game against the 99er’s…Nate Brant was out of action Sunday with an injury but is expected to return to the lineup sooner rather than later…Fellow forward Jack Dow was hit hard in Thursday night’s win and didn’t play in any subsequent games…Conger leads the club in scoring with five goals and five helpers in eight contests.