A new and anonymous benefactor is making October a month to remember in the expansion of the Picton Branch of the Prince Edward County Library.

An anonymous donor has pledged up to $50,000 to kickstart a matching donation challenge to support the much-anticipated renovation and expansion of the historic Picton Library.

“Inspired by individual and corporate donors as well as enthusiastic fundraising volunteers, we’re thrilled to announce a new benefactor is matching every single donation this month, up to $50,000,” said Barbara Sweet, CEO, County of Prince Edward Public Library. “This means that your $50 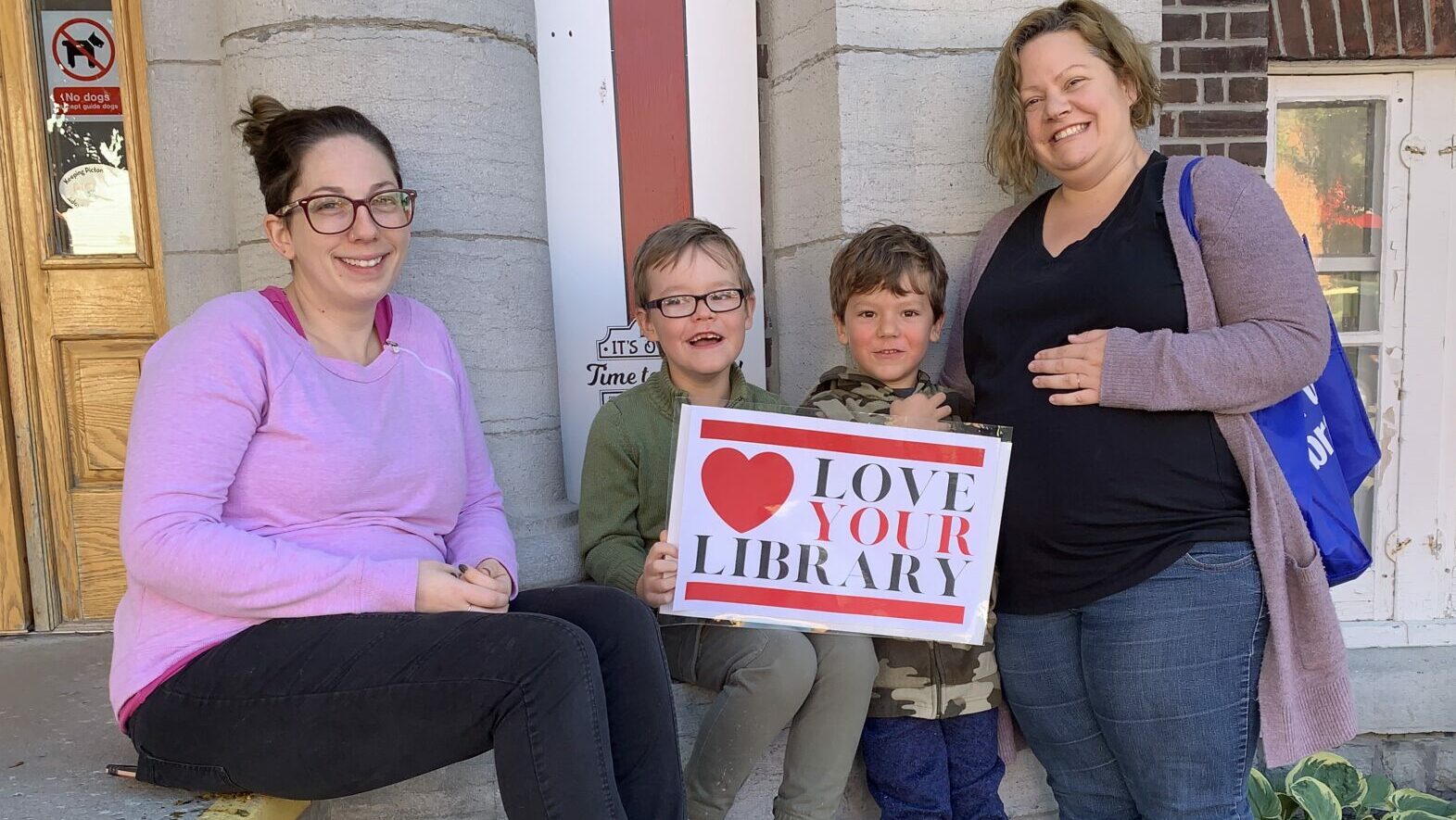 FOR THE LOVE OF LIBRARIES- Librarian Whitney Shantz is joined by Picton Library lovers Easton and Gilby Machell and mom Lindsay at the branch on Saturday. A donation matching initiative up to $100,000 supported by an anonymous donor for the branch expansion project has been announced for the month of October. (Submitted Photo)

donation in October will be worth $100. And corporate donations will be doubled.”
The generous donor loves libraries and is infusing excitement into fundraising efforts for the Carnegie-era built library. “Love Your Library” is the new call to action with the potential to raise $100K in October.

“I’m so excited for so many parts of the new Picton Library. Anyone who has attended the kids’ programs knows that space is usually pretty tight, and with excitable children the volume tends to go up. This is where more quiet study spaces will come in handy, for those who would like to avoid the noise. Also, updated washrooms are definitely needed. More comfortable
gathering space for book clubs, playgroups, seniors programming, and newcomers is also exciting. I can’t wait to see what happens,” Machell said.

In 112 years, only two small changes have been made to the Picton branch. The branch desperately needs both a renovation and expansion. According to Southern Ontario Library Service (SOLS) and Administrators of Rural and Urban Public Libraries of Ontario (ARUPLO) standards, the undersized Picton Library provides access to only 40 per cent of the recommended collection size.

Devon Jones, Chair of the County of Prince Edward Public Library Board said due to space constraints, limited accessibility and aging mechanicals, a 1907 building no longer meets the needs of our community.

“This is why the board asked County residents what they want from the Picton Library. People told us that the historic Carnegie built library should be upgraded. Whether you live in Ameliasburgh, Bloomfield, Consecon, Milford or Wellington, 208 Main Street, Picton is the physical hub that connects all six branches of the Prince Edward County library system,” said Jones.

Of the 111 Carnegie libraries built in Ontario, only 50 still operate as public libraries today. Picton Library is one of the few remaining libraries and continues to serve Prince Edward County as philanthropist Andrew Carnegie intended when he donated $10,000 in 1907 for the build.

“The renovated and expanded Picton Library will directly connect a gift made today with future generations of County library users,” Jones added.

October is Library Month in Prince Edward County and “Love Your Library” reflects the building excitement for the new Picton Library. Many naming opportunities are now available and library volunteers are talking with local businesses and individuals about how they can get involved.

Across Ontario, libraries are raising awareness of the valuable role public libraries play in people’s lives throughout October. Here in Prince Edward County, on Saturday, October 19, volunteers will host “Love Your Library Tag Day” at several locations in downtown Picton and every dollar raised will be doubled.

Meanwhile, Picton Library stacks will roll with laughter on Sunday, October 27 from 7 to 9 p.m. as Comedians Lenny Epstein and The Frere Brothers will lend their side-splitting talents to “Comedy Night At the Library”, the second annual Picton Library fundraiser.

It’s a not-to-be-missed night of laughter and community and Every $50 ticket sold will be matched by the “Love Your Library” donor challenge. “Comedy Night” tickets can be purchased online at peclibrary.org