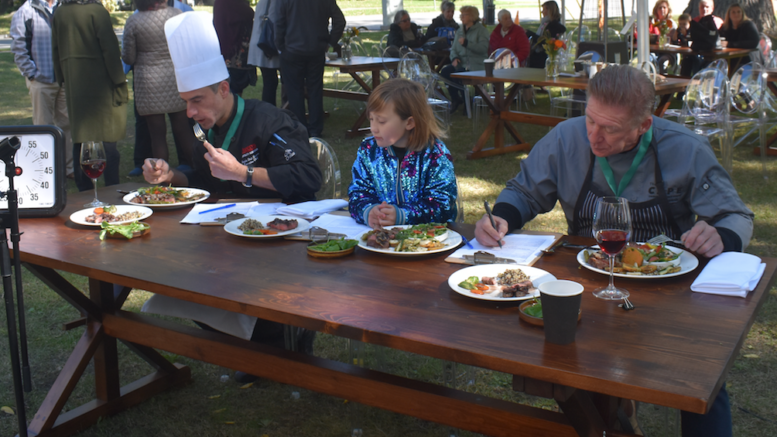 ALL IN A DAY'S WORK- (Left) Chefs Davide Del Brocco and (Right) Micheal Potters were getting good instruction from fellow judge Ramona Roblin during the Community Chef Mystery Challenge at the CAPE on Saturday. (Sarah Williams/Gazette Staff)

The Hub Child and Family Centre hosted a unique fundraiser Saturday on the lawn of The Culinary Arts Prince Edward (CAPE). The Chef’s Challenge saw six local businesses scramble to prepare a meal, which would then be judged by two professional chefs in the form of Davide Del Brocco and Micheal Potters and a local celebrity, six-year-old Ramona Roblin. All proceeds from the event went towards The Hub’s expansion project.

The Hub is a non-profit organization that has been serving the community since 1989. Their programs support children from ages 0-12 and offer a wide range of services and education to families.

Susan Quaiff, Executive Director of The Hub, spoke with the Gazette about the services provided, as well as the fundraising taking place.

“This event is to help us close the end of a program that we’re doing at The Hub. We’re looking for the last $300,000 to finish our expansion project. The total for project is about $1.1 million,” stated Quaiff.

Currently, The Hub has outsourced some of their programs to nearby facilities due to lack of space.

“It’s (the expansion) to bring all our programs back to The Hub at 10 McFarland Court, Picton. Currently, we’re retrofitting the inside of the building to take more children, so it’s all childcare there now,” said Quaiff.

She was careful to note that all school programming will remain the same, however, once the expansion is completed they will no longer be needing to use the nearby Rick Hotston Centre.

When asked why The Hub had decided to focus on making food for their fundraiser, Quaiff explained it was a natural choice for them, given The Hub’s ongoing emphasis on healthy eating.

“The Hub has always been about healthy food and healthy families-just, healthy beginnings. So, we’ve done a lot of work at the centre and fortunately, through a grant from The Parrott Foundation, we were able to put in a children’s garden,” stated Quaiff. “So, children learn about food-to-table right in their own backyard. They grow and they eat from the gardens. And, we always do scratch foods in our centre as well.”

Once the idea of a chef’s challenge was brandied about, Quaiff explained that The Hub’s Accountant, Carrie Davis, was instrumental in organizing the event, pulling the teams together and enlisting sponsorships.

Quaiff praised The Cape for also pulling everything together and offering the beautiful venue at a much reduced cost.

“Also, TD Bank has stepped in and purchased everything we need for today and we’ve had other great sponsors for example, Joe Pulla from Vince Foods, who supplied all the pantry items, Prinzen Chickens who donated chicken and the Cattlemen’s Association, along with Lynn Leavitt, who donated all the beef,” said Quaiff. Members of the Wellington Dukes were on hand as servers.

“It’s been challenging but the chefs along with The Cape folks knew how to pull it together and they’ve done a great job,” she enthused.

The expected expansion will be 3,200 square feet but, for now, it is sitting with the municipality for site plan approval. Ideally, according to Quaiff, they would like to have a fully functional expansion completed by Fall 2020.

The Hub is a bustling place. With most play groups having between 20-30 parents and children, as Quaiff states, the need for a more cohesive space, where services can be offered under one roof, is clear.

“We are already accommodating 81 children and the expansion will be for the early years contingent of that, along with the community,” explained Quaiff. The early years are all about parents and children coming together to groups to socialize, to get referrals to services and also to be able to purchase products at the baby box store.”

“The Rick Hotston Centre has been great for us, but we’re really looking forward to having everybody in one location. It’s such a continuity of services. You can come there prenatally, because you’re taking prenatal education and we get to show you the centre and talk about quality care. Then they go through to the school age programs that are in our schools. It’s a nice collaboration for sure,” said Quaiff.

After a day of culinary delights, the judges announced Nash Home Hardware in Wellington was the winner of The Chef Challenge.