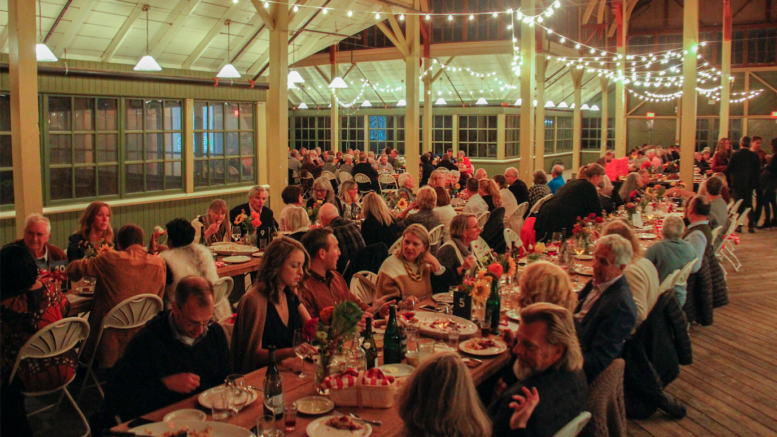 SEATED FOR SUPPER The fifth annual Food to Share Fundraiser dinner took place Wednesday evening at the beautiful Crystal Palace with 166 in attendance and raising close to $20,000 for the program and enabling them to continually cook throughout the year. (Desirée Decoste/Gazette Staff)

A local food insecurity awareness and response program held its fifth annual fundraising dinner Wednesday evening with 166 people seated at the beautiful historic Crystal Palace for ‘An Evening Under the Stars’.

This year’s Food to Share fundraiser dinner brought in close to $20,000 for the organization, eclipsing the 2018 total by $5,000 and the difference will help allow the program to continue cooking year round. Cherry Valley’s Glen and Susan Wallis started Food to Share in 2015 by winning a $1,000 grant from The Awesome Foundation.

The Food to Share program helps address food insecurity here in the county.

Wallis’ concept of the program was to take the bounty that’s grown in what use to be the canning capital of Canada and prepare food that can be distributed through food banks and other groups or organizations and the concept has definitely taken flight. Food to Share prepared meals and food twice a week every week through out the year and it’s the first year they’ve been able to do this.

“I would like to thank Glen and Susan for putting this on for many years,” stated Steve Ferguson, Mayor of Prince Edward County. “And to all the volunteers that are doing so much to provide a great meal and ambience and everything else to everybody here tonight.”

With it being the fifth annual fundraiser dinner, it’s only the third dinner held at the Crystal Palace, which the municipality donates to the program for the event.

“The support of the Municipality and having the use of the arena kitchens has been absolutely critical to that, so that’s an awesome first,” Wallis expressed. “I went to a food summit in April and met with people from all different food related groups from across the country and I came away with one profound unbelievable feeling that we in the county, every food bank, Food to Share, the Salvation Army, all of us are basically volunteers and we do more here than many municipalities with many, many, many paid staff are able to accomplish. And it’s not me, I just started this little ball rolling which has now become a behemoth and it never would have happened without the support of so many volunteers.” 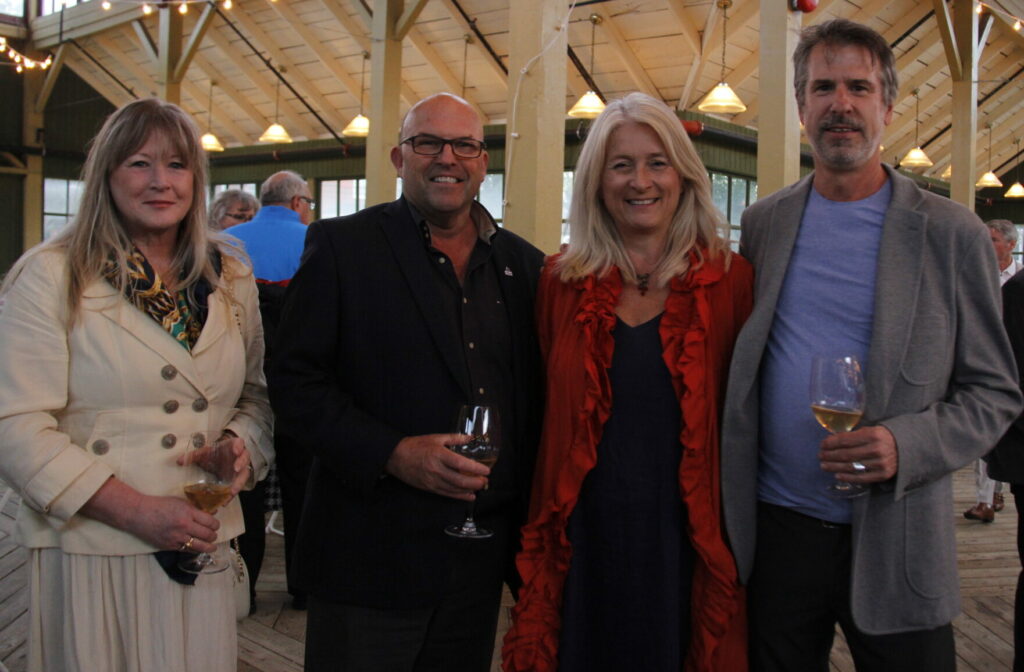 The evening started with a cocktail hour before the delicious meal prepared by Chef Jamie Kennedy and Food to Share volunteer cooks were served to the guests of the fundraiser.

The first course was eggplant marinated with oregano, squash and roasted red pepper, and Tomato, cucumber and arugula salad with feta.

The main course was the most tender, fall off the bone braised oxtail, goulash style with braised red and green cabbage and mashed potatoes with the choice of humble bread or sourdough boule and butter.

The five different choices were to hard to pick between so a taste of each was a must.

Wallis made it very clear, “Food does not have to come from half a continent away!”

Drinks for the evening were, sparkling wine from Phil & Debra St. Jean and red and white wine from Long Dog Winery, both these companies have supported the event for three years running.

Beer from 555 brewery, ciders from County Cider, delicious soda’s from County Soda’s, and coffee and tea from Lily’s Cafe.

Thanks was also extended to Elizabeth Crombie with Royal Lepage Pro Alliance for sponsoring the evenings entertainment from The Bruce McGregor Jazz Trio, Howard Baer on bass, Bruce McGregor on piano/vocals and Kenneth Erskine on drums.

“My favourite part of the night is when everyone is enjoying the sparkling of the lights/decorations and I get to mingle and meet people who are there,” said Wallis. “And once again this sort of thing is impossible without the support of so many volunteers and donors.”

Even with these kinds of fundraisers, food insecurity issues are still on the rise in Prince Edward County. The mayor voiced at the dinner that the municipality has allocated money in the 2019 and 2020 budgets to deal with food insecurity as well as municipal council has made food insecurity a priority in its strategic planning exercise they just went through.

“We must do more and we will do more,” announced mayor Ferguson. “Our ultimate goal is to declare that everyone in our bountiful community has enough to eat, so thank you for this initiative, thank you to the volunteers for setting up an extraordinary event, thank you to everyone who contributed and thank you to everyone who is donating to this cause. I think it’s important that we talk about and understand that the municipality of Prince Edward County supports Food to Share in many ways and food insecurity in many ways. As crucial as fundraising is, there are other elements that are important to this and it was important for this council to understand the extent of the issues were dealing with, with food insecurity.”

Back in May, five councillors and the mayor attended a ‘cooking with council’ event in Wellington at the Lehigh Arena to prepare meals for Food to Share and thus the food banks.

“Five councillors and I attended a cooking with council in Wellington, nobody lost a digit and everybody came out with somewhat better chef skills,” Mayor Ferguson said. “It was important for us to understand exactly what goes into what Food to Share does and it’s only through that understanding we can come up with a solution to this huge problem.”

The evening also included a silent auction with things such as gift certificates for, the County Canteen, Coach’s, the Yum Club, The Vic, Angry Birds and many more. Plus other treasures such as, an Instant Pot, Luxury Tours to Karlo Estate, a honey basket, an olive oil basket and so much more was up for grabs.

If you would like to help grow, collect and/or cook food or learn how to help in anyway, please contact the program at foodtosharepec@gmail.com