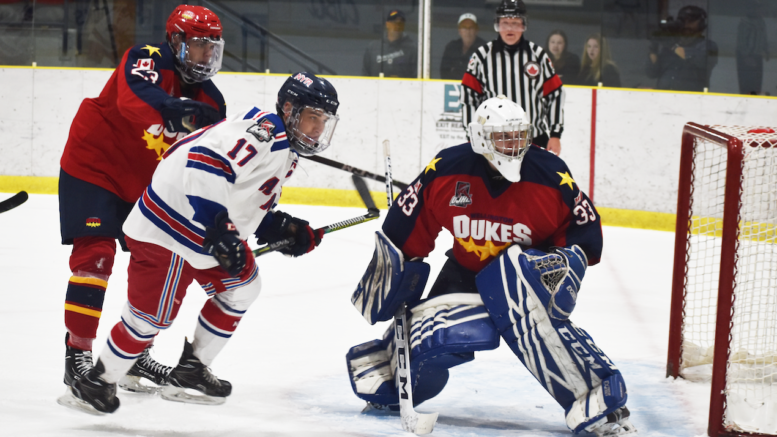 It might have been ugly at times and the players might have had to dig a little deeper, the Wellington Dukes managed make (almost) the most of their games this weekend, taking three of a possible four points to stay within a point or two of first place in the East division of the Ontario Junior Hockey League.

As of this writing, Wellington (11-3-1, 23 points) was tied with Trenton for top spot in the east although the Dukes have a game in hand over their Quinte area arch rivals .

The Golden Hawks and the Cobourg Cougars will fight over the last drumstick tonight at the Cobourg Community Centre, meaning the Dukes could fall out of first place once again however the locals can boast the best winning percentage in the division no matter what happens this evening.

Wellington needed a little overtime magic on Sunday night in Whitby to skate past the Fury 3-2.

Dukes leading scorer Jake Gagnon opened the proceedings on the power play, ripping home a top shelf effort from the right dot past Connor McKenzie at 16:26 of the first.

Wellington’s Ben Evans and Ben Addison picked up helpers on the scoring play. 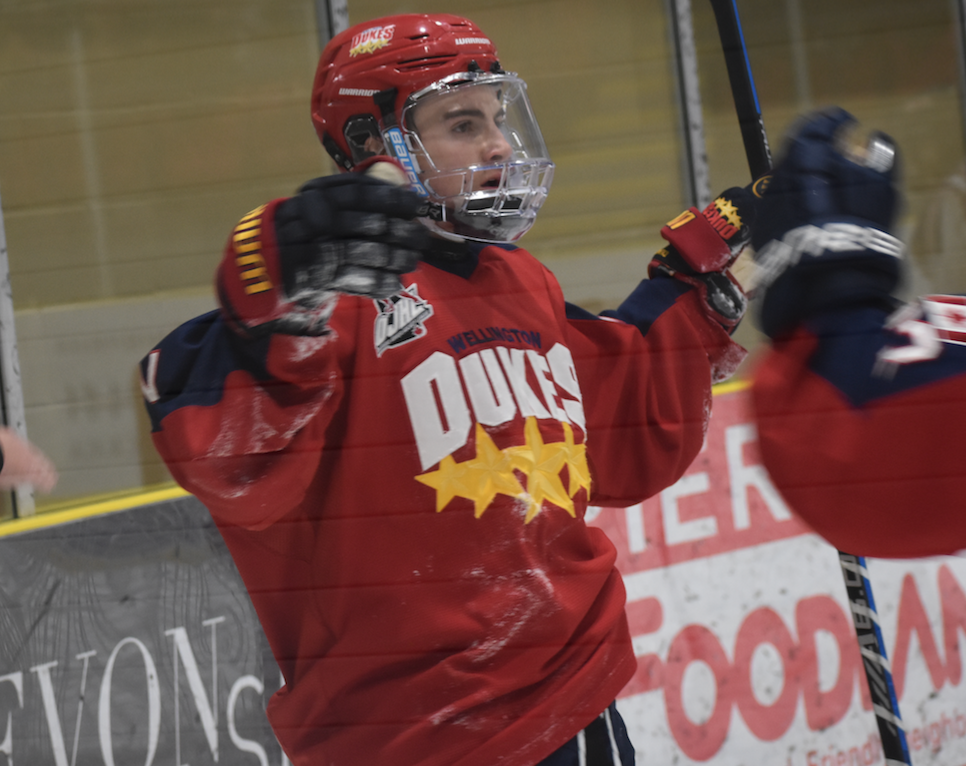 With a 1-0 lead through 20 minutes, it would be the hosts responding in the second.

Carson Whitson would pounce on a Wellington puck carrier at the 14:43 mark of the second and beat Dukes starter Matthew Dunsmoor to the top of the net to make it a 1-1 game.

Whitby would get their first and only lead of the game early in the third as Oliver Tarr picked off a Dukes pass up the middle of the ice and walked in alone, beating Dunsmoor high to the glove side at 2:11 to make it 2-1 in favour of the Fury.

On the very next shift, Evans would lug the puck into the Whitby zone and, while being harassed by a pair of defenders, snapped a puck past McKenzie upstairs to knot things up at 2-2.

The Dukes nearly threw this one away late as Captain Ryan Smith took a pair of stick penalties inside the final minute of play.

But Wellington was spot on with their penalty kill,  staving off Whitby for seven man advantage chances.

In overtime, Evans would count again for his second of the game, beating McKenzie at 3:12 of the first overtime period to snag the extra point.

Sunday’s triumph wasn’t the only overtime situation Wellington was tasked with this weekend as the Dukes played a pair of extra sessions with the visiting North York Rangers on Thursday night.

Neither team was able to find the back of the net however and the game ended in a 4-4 tie.

Considering the dog’s breakfast of a period Wellington played in the second, that even result probably felt like more of a win for Wellington as they had to score a pair in the third just to secure a single point in the contest.

The Dukes started well enough as Evans would score a power play goal thanks to a nice cross ice feed from Ben Woodhouse at 13:04 of the first.

Wellington should have extended their lead early in the second but a pair of massive saves by North York’s Eli Shiller set the stage for his Rangers to come back in a big way in the second.

Dimello Smith would send a leaky one past Wellington starter Matt Keeley at 9:58 to tie the game back up at 1-1. 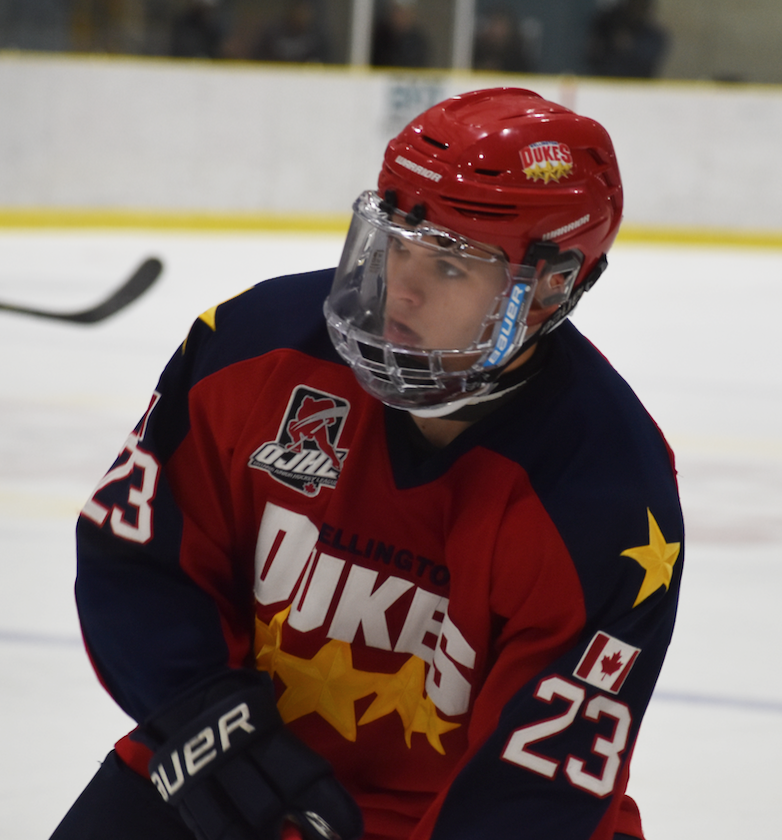 Less than a minute later, a horrendous give away behind the Wellington net allowed Daniel Petreccia to tee up from the slot and beat Keeley at 10:51 of the second.

Up 2-1, the Rangers kept their foot on the gas pedal.

Just under two minutes later, a combination of Rangers and Dukes took out Keeley.

Before the Wellington netminder could recover, Cole O’Hara found Adam Panacci in the slot at 12:00 to make it 3-1 for the visitors.

While the first Ranger goal had an odour to it, Keeley had no chance on the second and the third tallies.

Wellington bench boss Derek Smith took a time out and pulled Keeley in favour of Dunsmoor to help change the momentum of the game.

And the move worked initially.

Evans would find a streaking Gagnon cutting to the net at full stride and the Pointe Claire, QC native would tuck a backhand past Shiller 37 seconds after the Panacci marker to make it 3-2.

But Wellington couldn’t escape the frame without incurring further damage as Micheal Pereiras would count with under four minutes left in the middle stanza, beating Dunsmoor and restoring a two goal cushion.

In the third, Wellington played comeback.

Jacob Vreugdenhil followed up his shot from the half wall to grab a bouncing puck in the slot.

Able to shake off the North York checking with a burst of speed, the Belleville native flipped a back hand over a prone Shiller at 7:50 to make it 4-3 in favour of North York.

Wellington didn’t wait around to get the game tied back up as Smith would take a loose puck behind the goal line and bank it off Shiller and into the North York net at 9:33 to make it a 4-4 score.

Noah Massie, making a return to the Wellington lineup for the first time since suffering an upper body injury opening night, almost solved Shiller in the first extra frame with a nice toe drag move in the high slot but the North York goalie was equal to the task.

In the 3-on-3 session, Dan Panetta and Vreugdenhil almost capped off nice rushes in double overtime.

Wellington hosts Stoufville on Friday night and then travel Lindsay for an afternoon tilt with the all new Muskies.