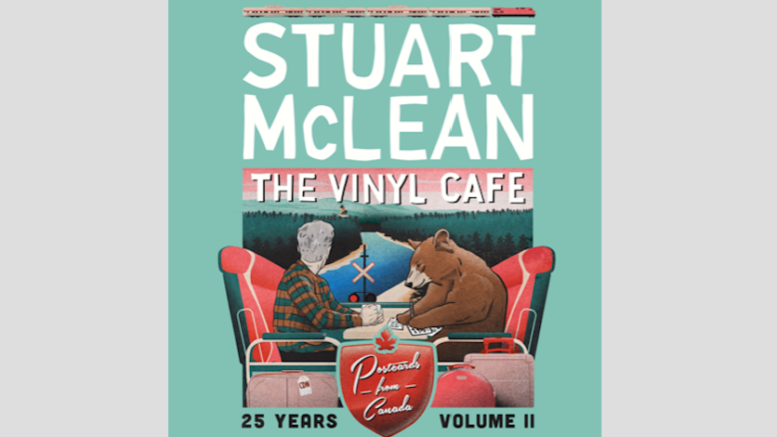 About a decade ago, Stuart McLean, host of CBC’s The Vinyl Cafe, visited Picton. For years, McLean and his team visited a host of small towns and cities across Canada, gathering and sharing stories, before McLean passed away in 2017.

Now, in celebration of the show’s 25th Anniversary, a new album of stories has been produced. Consisting of two volumes, volume one contains stories of Dave and Morley-two hapless but heartwarming characters dreamed up by McLean- and volume two features McLean’s essays of places across Canada. Although these essays have been broadcast on the radio, they have never been put to CD before.

Jess Milton, producer of The Vinyl Cafe, spoke to the Gazette about working on the 25th anniversary album, why Stuart McLean decided to come to Picton all those years ago, and the threads that tie this vast country together.

Given the length of the show’s tenure, Milton describes a recurring question that she and McLean would ask often ask themselves, “When should we stop?”

“The answer would always be, ‘in five years’,” said Milton, with a laugh. “I suspect when we got to the 25th anniversary, we would have gone to 30.”

For Milton, 25 years seemed like a great time to commemorate the show and McLean himself.

“It seems like it would be really hard, but it’s actually the opposite,” said Milton, when asked what it was like to work on this project, especially without McLean.

“Spending time working on this is like spending time with someone you love. Hearing that again brought me back to a really lovely place,” said Milton. “It sort of felt like the way it feels when you go outside at this time of year, then come back in and there’s a roaring, crackling fire, and you sit down with a glass of red wine or a tea. It’s just lovely, and cozy and nice.”

Milton noted that, after McLean died, many listeners contacted her expressing how much they missed his quintessential essays about place, which had opened McLean’s show each Sunday.

“We heard from a whole bunch of listeners who told us what they missed were those opening essays, because they were kind of like a window into life across the country. That made me so happy and so proud,” enthused Milton.

When the show had just begun, Milton states, her objective had been to create an assemblage of stories from across the country that would come together like a family photo album.

“Each individual picture wouldn’t tell the story of who you are as a family, but turn the pages and you see that life captured snapshot by snapshot. It gives you a sense of who you are, what’s important to you and what you value,” said Milton. “ It was my hope with the show that we’d do the same thing-that each individual essay about the town or city we had broadcast from wouldn’t have great importance, some would make you laugh or cry, but not necessarily be important. My hope was, over the years, it would add up to something thick and tell the story of who we are as a nation and as a people. As a whole, it adds up to something greater than the sum of it’s parts.”

Milton explains that she and McLean ventured to Picton to explore the tangible resurgence of interest in this rural area, from wineries to restaurants.

“When we came to town, that story changed completely,” explained Milton, “We started wandering around and what we became interested in was why Picton worked so well…we immediately dropped the story we were going to write about and immediately started writing about your Main Street and what makes it work so well.”

McLean’s essay about Picton, originally broadcast live from The Regent Theatre, is a love letter to the ineffable charm that draws so many to this place and keeps so many here.

Whether a sense of the collective good implemented through policies such as healthcare, as Milton pointed out, or simply a friendly nod while walking down Main Street, she believes a defining characteristic of Canadians is that we care for the collective.

“So often, especially these days, we focus on our differences and what makes us different, but what we found travelling across the country was exactly the opposite,” stated Milton. “Of course, there are little quirks in each place, but over and over, we saw there’s something that unites us and I think that’s a tendency to focus on the collective rather than the individual.”

The Vinyl Cafe, with their 25th anniversary album, once again delivers this quintessential Canadian sense of warmth and togetherness for listeners across the country.