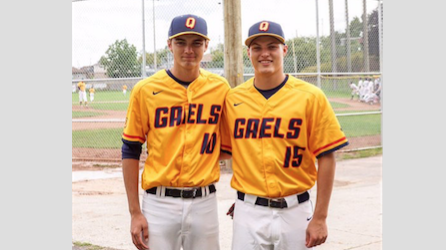 GOLDEN BOYS (From Left) Former PECI Panthers Will and Gavin Ronan were among the top arms on the hill for the 2019 Queen’s University Golden Gaels baseball team.  (Submitted Photo)

A pair of Picton natives teamed up to help the Queen’s Varsity club Golden Gaels baseball team to an 8-7 record and an appearance in the Ontario University Athletics Playoff tournament this weekend.

Senior Gavin Ronan was joined by his younger brother Will Ronan on the Golden Gaels in 2019 and coach Jeff Skelhorne-Gross appreciated the efforts of the PECI alums to the Queen’s University Varsity Club program.

“Gavin and Will are both great kids and were both important players for us this year,” Skelhorne-Gross told the Gazette via email Tuesday.

Gavin Ronan would wind up wining three games for the Gaels this season and threw a no hitter on Sun., Oct. 6 against the visiting University of Ottawa Gee Gees.

“Gavin is in his 4th year at Queen’s and was a ‘two way’ player for us, taking a regular turn on the mound and also DH’ing which is pretty rare at our level,” the coach said. He had a really good year on the mound.”

Gavin Ronan drew the starting assignment for the Gaels in their first tournament game in Ajax against the University of Toronto, picking up the win in a 7-5 Queen’s triumph.

In the wild card game against the Carlton Ravens on the final day of the tournament, the eldest of the brothers would pitch 1.1 innings in a 3-3 game, scattering a pair of hits and fanning two in the late going. Queen’s would wind up allowing a run in the top of the ninth inning and couldn’t answer back in the home half, eliminating them from contention. In the finals, Carlton would wind up losing to the 2019 OUA Champion Laurier Golden Hawks. ]

Typically, freshman rarely see the field in thier first season of Canadian University baseball but Will Ronan was an exception and will likely factor heavily into Queen’s plans in future seasons. “He surprised us a lot with what he could do and became our top reliever,” Skelhorne-Gross said. “He made two appearances in the playoffs and he’s going to be a key player for us in the future.”

Both players played for the PECI Panthers as well as the in Quinte Royals program.

Gavin studies planning and development while Will is in his first year in Queen’s Engineering program.