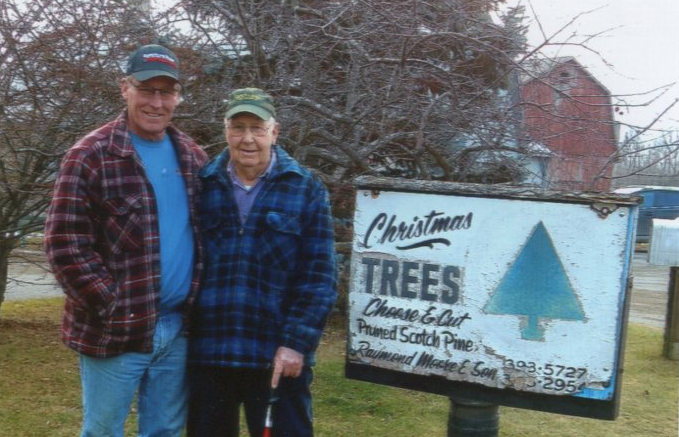 The nip in the air, the sun setting on the ridge and the sounds of children and families trying to find just the right tree that will commemorate that special family gathering in late December. And, of course, the wonderful scent of evergreens.

Those are memories of cutting your own Christmas tree at Raymond ‘Bud’ Moore’s Christmas Tree farm on the Ridge Rd. in Hallowell.

The Moore family has been in the process of winding their business down and hadn’t planted any seedling in the last five or six years and the Raymond and his son Paul wanted to take the opportunity to thank both their customers for 25 great years of business.

“We made some real good friends and connections in this business and there’s a lot of good memories,” Raymond Moore told the Gazette.

Raymond started the business in 1983, planting about 25 trees with the idea not only to sell Christmas trees but also help control wind erosion on his farm between Picton and West Lake.

The trees took to the naturally sandy soil on the Ridge Rd. and the first crop was ready by 1988.

In total, 15 acres of land was set aside for the various varieties and, while there’s no running total as to how many trees were cut to became the centre piece of a cherished family Christmas, the number is certainly in the thousands.

The key to growing good Christmas trees is soil, pruning and making sure the grass around the trees is neatly mowed both ways to allow the seedlings to take.

“They really like this soil, once they hit about three feet-boom, they take right off,” Paul added.

While their names were synonymous with Christmas trees in Prince Edward County, people from all over the Quinte region and well beyond would travel to the Moore farm when the days ran shorter and it was time to clear a space in the family room for the yuletide mainstay.

“We have a cousin in London, On that always comes and cuts about four,” Paul said. “People from Frankford, Stirling and Napanee come every year. We have the odd ones that go to Toronto.”

Last year, one Moore Christmas tree made a tedious trip to the Big Smoke.

“A customer came with a small SUV and they cut a tree that was about as long as the vehicle,” Moore said. “They asked about some twine and I said ‘Sure, how far are you going?'”

When “Toronto” was the reply, Paul gave him as much twine as he needed and wished him the best of luck.

Raymond recalled a young family from Belleville showing up with a toddler one year in the early days.

The folks took a picture in front of their tree of choice and were soon on their way.

The next year, the scene with repeated but this time with a new born. And the following year, a set of twins graced the photo.

“We didn’t see them for quite a long time but they showed up a couple of years ago and all the children were in university and they took another picture with all of the family together,” Raymond said.  “The told me ‘Don’t you stop selling christmas trees until the kids are finished with university’.”

Now, much like the shifting sands of the unique Ridge Rd. landscape, there’s change at the western end of the secondary road and the steady stream of people looking for their Christmas tree will cease this fall.

“I turned 90 this year so I figured it was time to stop,’ Raymond said.

“It started out as dad’s retirement and it was turning into my retirement,” Paul added with a laugh

While the family hadn’t planted a tree in about six years and knew this day was coming, both men admitted it would be a strange feeling not to have people drive up and pick out and cut their own Christmas tree this fall.

There will be a little more spare time as the flow of customers was steady every weekend in November and then busy right up until Christmas Eve. Or even later.

“I don’t know if he bought the original from us but we had a guy show up on Boxing Day one year and he wanted a tree,” Paul said. “He had a tree and his wife went to Florida and she was coming back on Dec. 27th. He hadn’t watered his tree and now he was really desperate for a replacement.”

“I think we saved his bacon that Christmas,” Paul said with a chuckle.