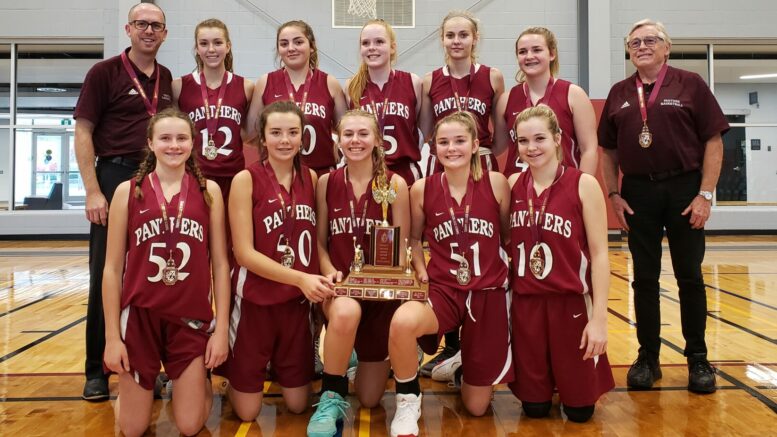 It’s a case of ‘Mission Accomplished’ for the PECI senior girls basketball team  as the squad won their first tournament championship in over five years at the Trinity College Invitational Tournament this weekend in Port Hope.

“One of our goals all season was to win a tournament.  We’ve had great success over the past five years winning multiple Bay of Quinte, COSSA Championships and OFSAA games, but a tournament championship has eluded us,” said coach Rob Garden.
In their first game on Friday night, the Panthers matched up with Appleby College from Oakville.  The Cats looked like a team on a mission starting the game on a 14 – 0 run.  They never looked back defeating the prep school 68 – 12.
In game two on Saturday morning, the girls faced the two-time defending champion St. Mary Catholic School Huskies from Brockville.
“We didn’t know much about St. Mary, other than they had won the tournament the past two years and are always a perennial OFSAA team from Eastern Ontario.  Coach Ernie MacMillan and I have been working hard with the girls this season to not worry about our opponents as much, but to focus more on playing our game.  This was a great test for our team’s mental toughness,” Garden explained.
St. Mary employed a number of different defensive looks to try and confuse the Panthers, but led by guards Vanessa Wilton and Hannah Goad, the team was able to get an early 10 point lead at the half.  The Huskies trimmed the lead to four points in the fourth quarter, but the Panthers didn’t break and won the game 43 – 38.
“This was the first time that we faced adversity while leading this season.  It was great to see that the girls bent but didn’t break.  Chloe Marshall, Gracie Burris and Wilton were tremendous in shutting down St. Mary’s 6’3″ post player.  It was the difference in the game.  Maeve Veenstra, our lone grade 9 player, also performed very well.  She’s never afraid to attack the basket and look for her shot, which is really great considering she’s playing against girls four and 5 years older than her,” said Garden.
With the win, the Panthers got ready for the championship game versus St. Theresa from Belleville.  “St. Theresa is a very good team.  Both of us are a top-four team in the Bay of Quinte league, so we were excited about the challenge,” commented Garden.
As advertised, the game was back and forth in the first half with the Panthers building a small 27 – 24 lead at the half.  Lauren Smith had one of her best performances this season scoring 12 points in the first half.
“We made a defensive adjustment at half time and we had a great third quarter, building a 14 point lead.  We knew St. Theresa was too good and they would have a run, but we had learned a lot from our game with St. Mary and we did a much better job controlling the tempo in the final quarter playing with the lead,” the coach commented.
The Panthers ended up winning 51 – 40.
“We came in with the goal of winning the title and we accomplished that goal.  All the girls on the team contributed over the course of the tournament, and it was great to see our leaders like Wilton, Smith, Goad, and Leavitt play hardball when we needed them the most,” Garden said. “However, I think the bigger win is in the fact that we’re learning how to play the game with a high IQ.  The games will only get tougher as we move forward and these lessons should serve us well as we get into playoffs and make a push for OFSAA.”
Up next for the Panthers is a league game vs. St. Theresa on Tuesday.
“This game could decide first place in our league, so we know both teams will be up for the game.  It will be a fun game and another great test for our team.”
The game tips off at 4 pm at PECI.
SHARE TWEET PIN SHARE