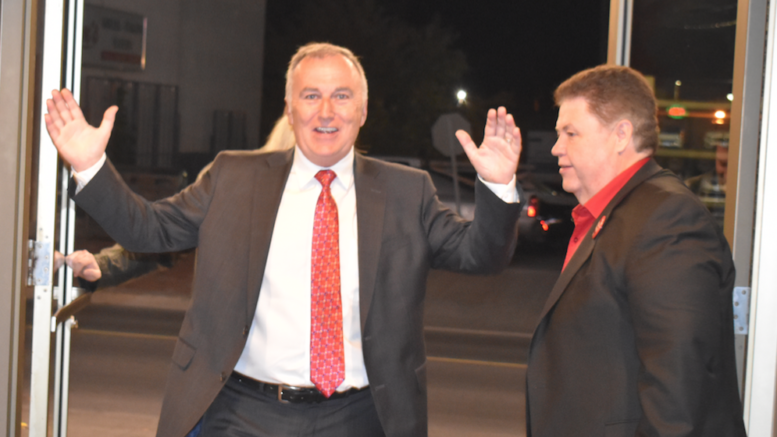 With the chaperone of a minority government, Prime Minister Justin Trudeau is heading back to 24 Sussex Drive.

The Liberal Party of Canada saw 157 of their members elected in Monday’s federal election and the party will once again hold the position of power at the House of Commons.

But it’s not with the mandate the electorate gave Trudeau in 2015.

While the Conservative Party of Canada chipped away at the Liberal stronghold, so too did the nationalist and progressive Bloc Quebecois party in La Belle Province.

The Bloc will be able to drive some of the mandate at the House by virtue of their 32 seats, an increase of 22 over the 2015 result.

All told, the CPC took 121 seats in the house and, as a expected, Western Canada was a stronghold.

Ironically, the Conservatives took the popular vote with 6.155 million ballots cast in the party’s favour however their prowess in Alberta and Saskatchewan belied their stature nationally as that popularity in the prairies overshadowed their diminished totals in vote-rich Ontario and Quebec as well as Atlantic Canada thrown in for good measure.

If there was one party that had to be disappointed by their results nationally but buoyed by their prominence in the 43rd Canadian Parliament, it’s the New Democratic Party.

The NDP lost 15 seats from 2105 but, with their 24 seats currently, they will hold a key position on the right side of the House and be able to collaborate with the Liberals to pass more social programming and hold the government’s feet to the fire on items such as indigenous issues like water and reconciliation as well as keep the government on track regrading climate change.

While Canadians voted in record numbers at advance polls, voter turnout slipped slightly over  2015 totals. This time around,  66 per cent of Canadians turned up at the polls in 2019, a decrease of 2 per cent over four years ago and those totals nationally accurately reflected numbers here.

Locally, the race for the Bay of Quinte was incredibly tight as Liberal Neil Ellis eked out a return trip to represent concerns from the Quinte area in Ottawa.

Conservative candidate Tim Durkin fell by a total of 1,465 votes, earning 36.9 per cent of the ballots cast.

NDP Candidate and Picton resident Stephanie Bell tallied in third place with 9,770 or 15.8 per cent of the ballot.

Green Party candidate Danny Celovsky picked up 3,744 of the votes while People’s Party Candidate Paul Bordonaro was on 1,202 of ballots cast in the Bay of Quinte in 2019.

If it was a raucous party from the word go in 2015 at the Empire Theatre, this time around Ellis and the party faithful were a little more subdued.

At most 75 people filtered in to the cavernous confines and were nervously watching both the national picture as well as the prospects of their candidate of choice.

After about 15 per cent of the Bay of Quinte polls were reported, Ellis slowly started to build a margin on the field with Durkin proving to be the primary pursuer.

The winning edge would ebb and flow, some times narrowing to as little as 400 or so votes and then climbing to as many as 1,100 as LPC supporters slowly started to gain more confidence Neil would be wheeling back to Ottawa.

But the mood was always tempered with what was happening nationally and prospects of a Liberal government off the minority variety were very much a bittersweet result after four years of majority. 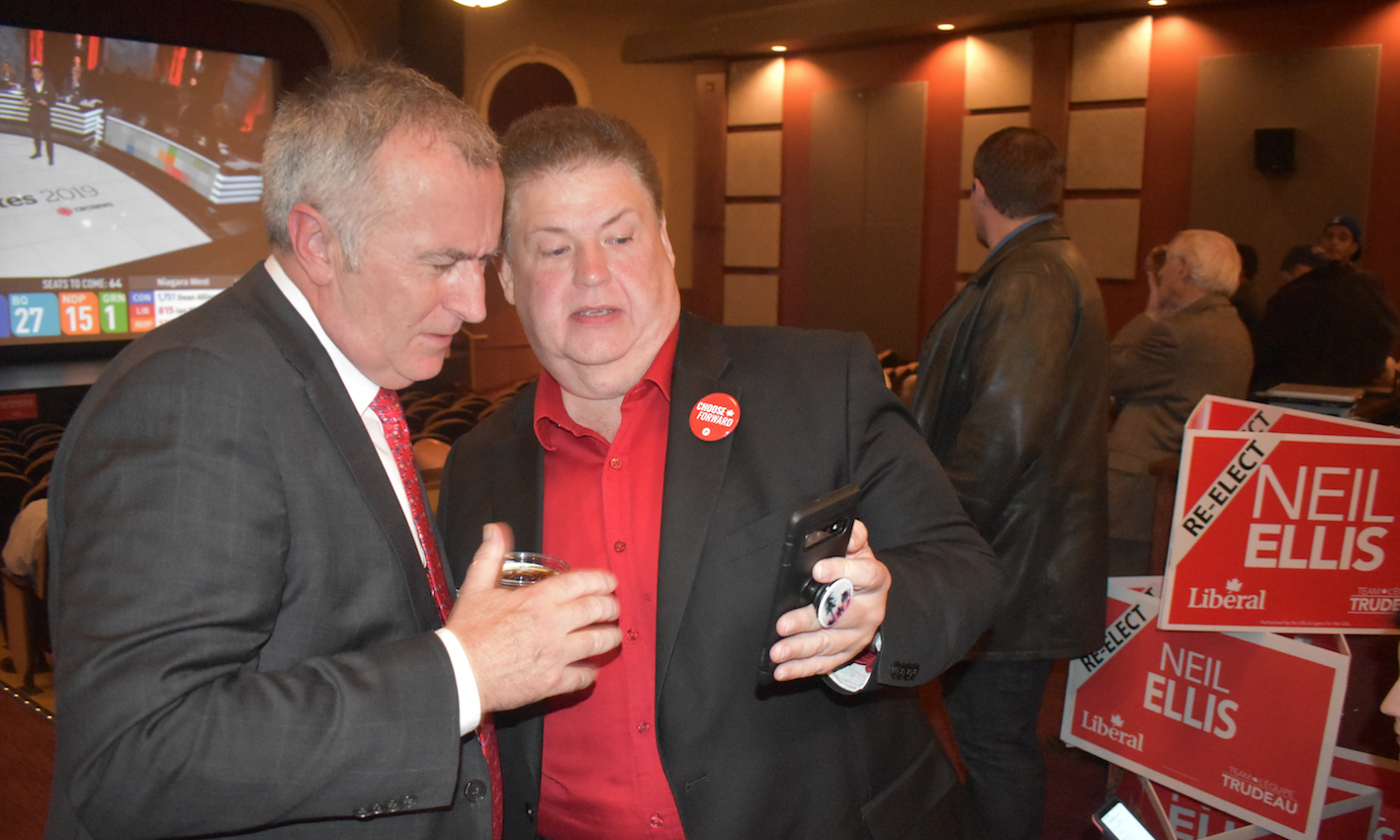 Finally, when it became apparent Ellis was the person elected by Bay of Quinte voters in 2019, he took to the stage and thanked party volunteers, his family and those who entrusted him with another term of office.

Ellis said what he heard most of in the riding was the need for affordable housing in the Quinte area and that was going to be a concern raised when he gets back to the nation’s capital.

Ellis added a national pharmacare program is “close to his heart” as well as building equitable access to both family physicians and mental health experts is a primary goal for his constituents.

When asked about the divisiveness of this campaign, Ellis said that aspect came out of the national arena but he had much respect for his fellow Bay of Quinte candidates.

“We’re all adults and as much as you might see on television, we do get along. I’ve got a lot of friends that are members of the other parties,” Ellis told the Gazette.

One friend Ellis won’t be seeing at the House of Commons is Mike Bossio who lost to Conservative Derek Sloan in the neighbouring Hastings-Lennox and Addington riding.

Ellis and Bossio spent much time in each other’s ridings for government announcements and worked closely together to promote the Liberal brand of politics in this area.

“I feel bad because Mike is an incredibly hard worker. He can out work me 2-to-1 but he will be back and I know he won’t quit,” Ellis said of his vanquished Liberal colleague.

While there was a quiet gratification in Belleville, the scene was more sombre at Huff Estates where Durkin and the CPC supporters gathered to watch the results in Prince Edward County.

As mentioned, Durkin was in the running to upend Ellis even after about 80 per cent of the polls had been tabulated but as that number dwindled, the Belleville broadcaster ran out of time.

“It was 599 days ago when Jen and I sat down and had a conversation about running for the nomination,” Durkin said. “and now here we are as we decided to go down this path.”

When asked about issues Durkin that came up during the local campaign, one that persisted though out was affordability.

“Affordability is the big issue right now,” Durkin stated. “We’ve talked to tens of thousands of people that are getting by but not getting ahead and we need to make sure that as cost of living goes up, whether that be through taxes or the fact that things aren’t going up with peoples salaries. We need to be there to make sure the government is there to support people but also to get out of the way to let the private sectors succeed as well.”

While his concession call to Ellis came well after some media outlets projected the Liberal was going back to Ottawa, Durkin was gracious in defeat and expressed it’s time to turn attention to supporting Bay of Quinte’s 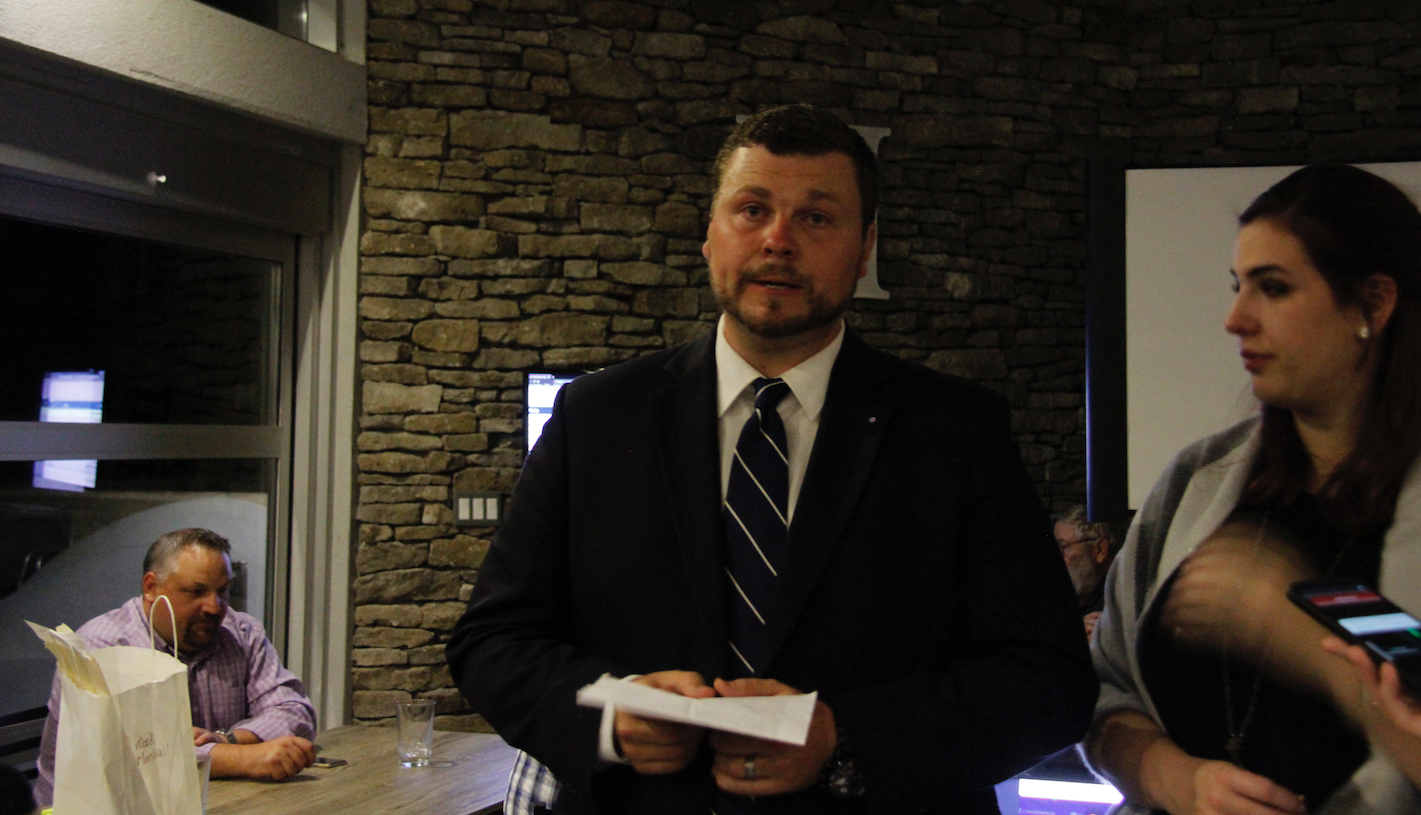 elected member of parliament and  make sure the minority government is held to account.

As Durkin’s’ first time running as a candidate in a federal election he felt humbled, proud and emotional to be the local candidate for the Conservatives.

“It’s a free post secondary education in humanity because you go to peoples doors and you hear everything from “What can we do to help,”  to, in no uncertain terms, “Get off my property.” It thickens up your skin a little bit, it makes you vulnerable but it also makes you a better person in the fact you understand people and you understand their needs and I think that helps in the long run, win or lose I think there is something to be gained for myself, my family and most importantly for the riding as well.”

Durkin also spoke of a nasty national campaign that didn’t reflect the feelings locally and that was a testament to the character of the candidates involved.

“One of the things we saw was perhaps some national animosity but what we saw locally was five people that generally wanted to make a difference, that wanted to get elected, that wanted to work hard but at the end of the day, once we switch from animosity, we have to focus on what makes our country better it’s not about bickering and fighting, and an election can bring out the worst in people but I think it can bring out the best in people to and that’s what we have to focus on.”

BELL ENCOURAGED BY RESULT IN BAY OF QUINTE

Despite a drop in federal seats, the hopeful atmosphere at the County Canteen could not be assuaged on election night as Bell gathered with her team and supporters to watch the results being broadcast at the local watering hole.

Although the NDP lost 15 seats since Parliament was dissolved, Bell scooped up 9, 770 votes in the Bay of Quinte Riding, an increase of 2,769 over Terry Cassidy’s mark in 2015.

Bell took a few moments to speak with the Gazette about the NDP campaign.

“I’m  really proud of how they approached things. I was really excited for them to have lots of young, diverse candidates. I don’t see much they did wrong,” expressed Bell.

Bell extolled the strengths of the NDP, admitting they were working with a spate of new candidates, something she cites as being tough task.

“There were some things…the way they were sending out suggestions to candidates and how to dialogue with people-I think we could improve that,” stated Bell. “Otherwise, I’m really proud of the team they put together. They have a lot of new candidates. And, I don’t think they necessarily did anything wrong, but having a bunch of new candidates is always going to be harder.”

Bell brought in more votes for the NDP in the BoQ Riding than has commonly been seen before.

“At the local level, I’m doing as strongly, if not more, than the party has  at almost any other time, other than provincially. So, I feel good about it,” said Bell.

The local NDP Candidate also praised federal leader Jagmeet Singh’s ability to engage youth. Bell stated that it was obvious to her that youth were engaged with this election, based on various interactions she’d had during the campaign.

When asked whether or not she would re-enter the political arena, Bell was enthusiastic.

“We (the BoQ NDP team) were all laughing because we feel so confident about running again and we’re so ready to do it again,” stated Bell.

She further iterated that, had there been more time on this campaign, she believes she would have done even better.

“I’m really proud of them (NDP),” said Bell. “I want them to continue with the same candidates and I hope that the candidates learn and are able to run again. I think they’re going to be really effective next time around and the benefit of-almost using this as a training ground for candidates-is a really positive thing to do. I  think they should continue to do that.”