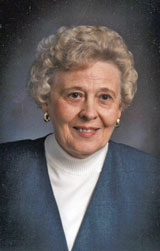 Ruth Beer passed away peacefully, at Grand River Hospital on Thursday, October 17, 2019 with family at her side at the age of 94. Beloved wife of the late Joe (2010). Dear mother of Greg (Enzo) of Hamilton. Dear mother of the late Gary (2000) and Rod (2012) and grandmother of the late Chris (1997). Survived by her grandson, Jamie and her daughter-in-law, Sherri, both of Waterloo. Also survived by her sister, June, of Toronto. Predeceased by her sister Greta and brother Gordon. Educated in Prince Edward County, she excelled at public speaking and received an associate degree in Elocution and Expression from the Canadian College of Music . She married Joe in 1946 and as a military family they lived and traveled extensively throughout Europe. This began a life-long love of travel; Russia and Israel being two particular highlights. She worked all her life from the family farm to a wartime munitions factory and later the Income Tax Office in Belleville. She received her Real Estate Licence in 1970, which she held until the age of 83. This was her great passion. Many of her clients have remained life-long friends. Ruth’s family will receive relatives and friends from 12:30-1:15 pm on Thursday, October 24, 2019 at Henry Walser Funeral Home, 507 Frederick Street, Kitchener, 519-749-8467. A funeral service will take place at 1:30 pm on Thursday in the chapel of the funeral home followed by a reception. Interment Hillier, Ontario. As expressions of sympathy, donations can be made to Supportive Housing of Waterloo (SHOW) and would be appreciated by the family (cards available at the funeral home). Visit www.henrywalser.comfor Ruth’s memorial.