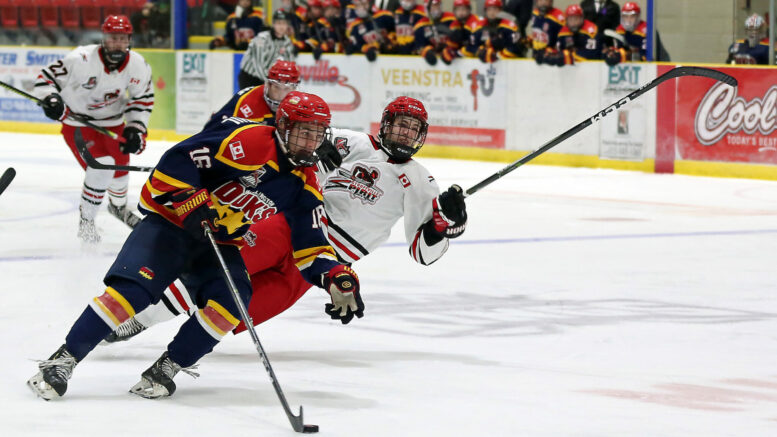 Dukes tied for first overall in OJHL in points thanks to wins over Stoufville, Lindsay this weekend
JASON PARKS

Their path to victory isn’t always straight forward and they are guilty of not playing a complete game on most nights but, as the old sports axiom that’s been used already once this season to describe the Wellington hockey club goes “Argue with my results, not my methods” continues to be apt.

And in a results driven sport such as junior hockey, Wellington’s results have been very good so far this season. 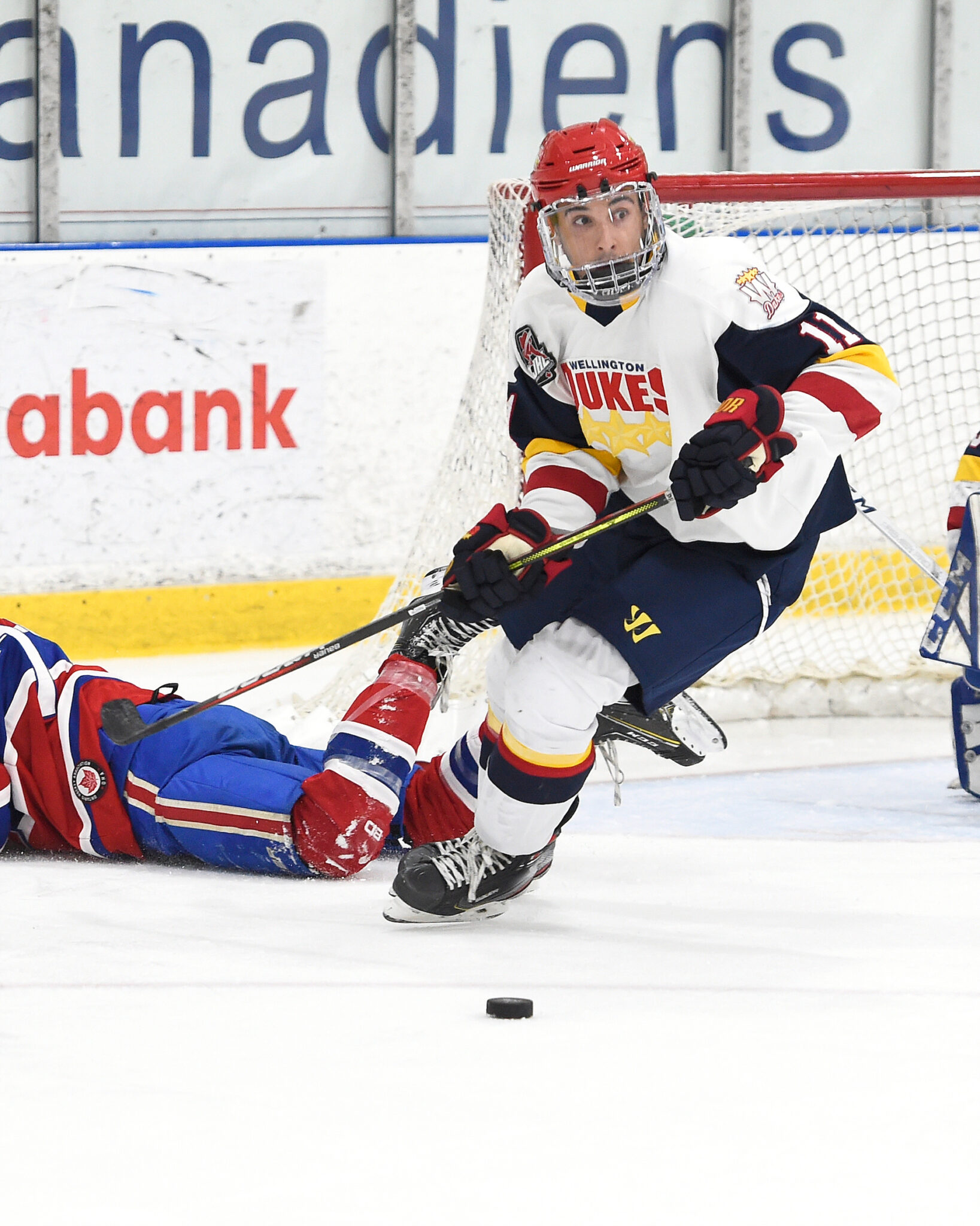 The Dukes picked up a pair of wins this weekend to move their record to 13-3-1, good enough for top spot in the Ontario Junior Hockey League’s East Division by virtue of their gaudy .794 winning percentage and 27 points.

Arch rival Trenton has the same number of points but Wellington has a pair of games in hand over the Golden Hawks. The locals are also tied for the Southeast Conference lead with the Toronto Patriots although the Pats have a game in hand on the Dukes.

Wellington finally got some love this week from national Jr. A hockey watchers, cracking the Canadian Junior Hockey League’s top 20 rankings, appearing for the first time in 2019-20 and slotting into 12th place overall.

On Friday, the Dukes shook off a bad start to get past the visiting Stoufville Spirit 6-2.

Despite outshooting the Spirit 12-7 in the opening frame, it was the visitors staking themselves to a 2-0 lead.

Jamie Mazomenos broke the ice with less than five minutes left in the first as he beat Wellington starter Matt Dunsmoor at the 15:20 mark.

Just 1:26 later, it was more indifferent play in the Wellington end that led to Connor May slipping the puck past the Wellington netminder for a 2-0 margin that Stoufville took to the dressing room for the first intermission.

After a likely tongue lashing in the Wellington dressing room by Dukes Coach Derek Smith, Wellington responded early in the second stanza to tie the contest.

Wellington’s Ben Woodhouse turned in some nice work in the corner on the fore check and a feed to the slot found Frank Vitucci lurking for a nice one timer at 2:09 that beat Stoufville starter Damon Beaver.

Wellington didn’t relent after getting to within one and some nice forechecking by Dan Panetta led to a neat unassisted effort just under two minutes after the Vitucci goal to make it a 2-2 score. Wellington would blast 14 shots in the frame towards Beaver but the Stoufville tender held is own in the second period barrage.

But Beaver’s dam broke in the third as one of the many speedsters on the team Jacob Vreugdenhil created his own time and space to get in alone on the Spirit net.

The Belleville native’s sixth of the season would stand up as the game winner but Wellington wasn’t done flexing their offensive muscle. 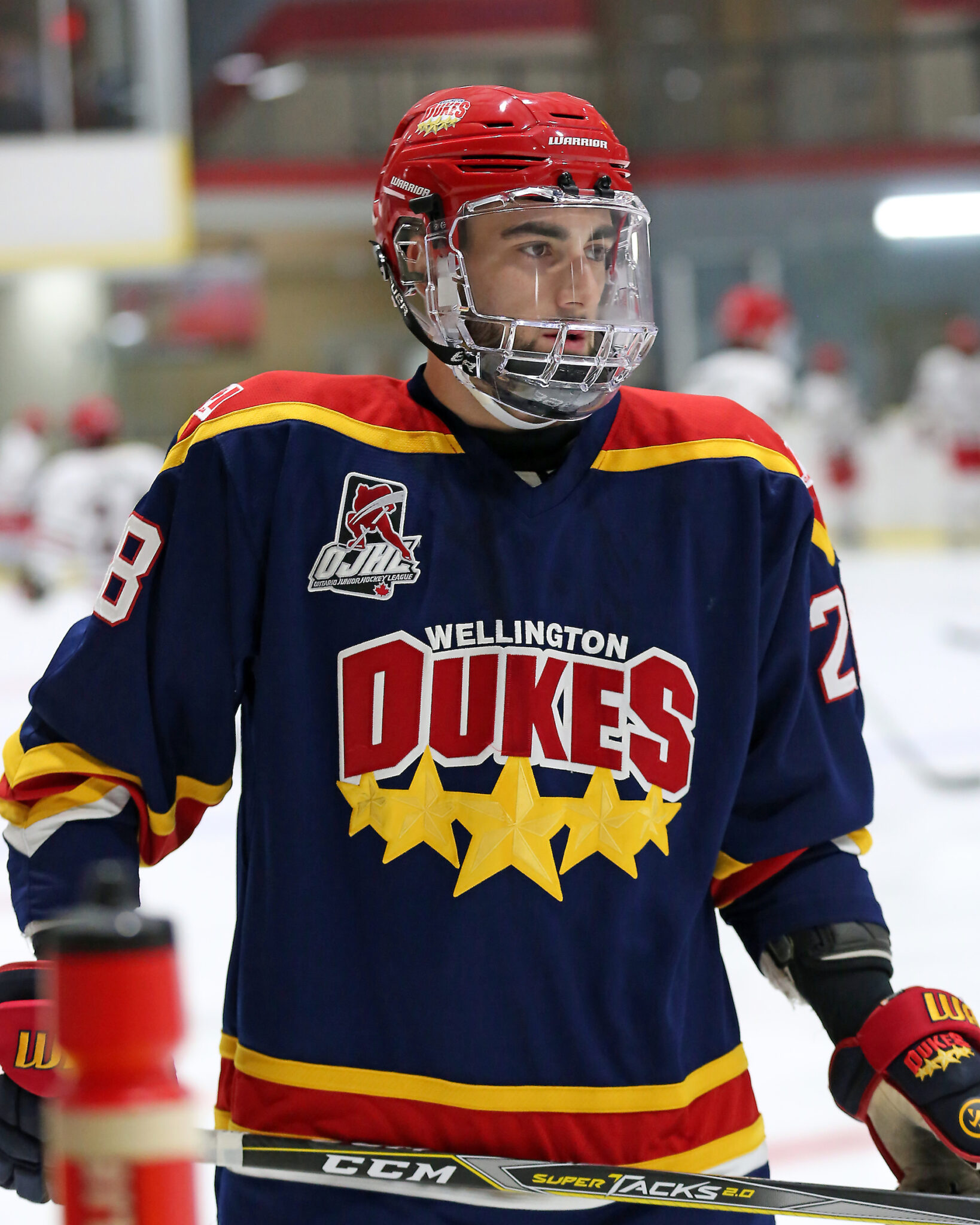 Vitucci’s second of the game would come at 13:22 and put the Dukes ahead comfortably 4-2.

With the Stoufville net open, Panetta, who has been displaying another gear and a dose of intensity in recent games, would fire a puck into the yawing Stoufville cage with just under two minutes left, cementing the fact the home side fans would go home happy.

But Vitucci would make sure Dukes fans went home jubilant as Quinn Hanna would set up the Yardley, PA native with a hat trick effort while Wellington was short handed in the dying moments that made it a 6-2 final.

On Sunday, the Dukes travelled to Lindsay to play the improving Muskies who have undergone a coaching change en route a potential culture change and, hopefully better fortunes.

Full credit to the Muskies on Sunday as they battled Wellington tooth and nail to a 2-1 set back.

Dawson Ellis would put Wellington ahead with the first period’s only goal thanks to help from Panetta at 15:03.

But a Muskies powerplay goal in the second event things up.

The Dukes would bomb the Lindsay net at will in the third, sending 22 volleys towards Dean Bucholz. The Lindsay goalie was fantastic.

But then, Wellington’s 22nd shot of the frame just as a powerplay was expiring snuck past the Lindsay netminder.

Brandon Brazeau, a player acquired from the Markham Royals last week, would get a stick on the puck with just four ticks left on the clock to push his new club ahead to stay at 2-1.

For a club that already scored with a second left to tie a game and then beat the Aurora Tigers in overtime 36 seconds later, Sunday’s effort was a little more garden variety in terms of dramatic finishes. Wellington is in Trenton Friday and then travels to Mississauga Saturday.

LEDES AST LEHIGH: After picking up Brazeau, the club traded Tanner Tolliver to the Western Summerside Capitals of the Maritime Junior Hockey League for a player development fee.