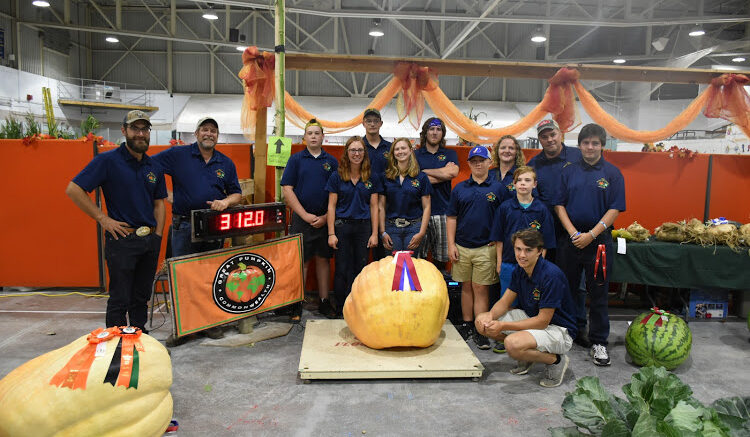 ORANGE GIANT The 4-H Giant Vegetable Club seen at the 2019 Picton Fair with their efforts which included a 688 lbs pumpkin. (submitted photo)

More then a month has past since the annual Picton Fair but recognizing 4-H club members and the Achievement Events they participated/placed in is timeless.

These achievement events give every 4-H club member the opportunity to demonstrate to parents, friends and the community their newly acquired knowledge and skills.

It was a true “Learn-by-doing” experience for members of the the Prince Edward 4 H Dairy Club as 10 of the 20 members who showed their calves in 2019 were first time members.

Leaders for the club, Resi Walt, Patti Stacey and Phil Prinzen were very pleased with the way all members worked together to help each other prepare their calves for the show.

The Grand Champion Show Person trophy is awarded to the member who demonstrates the greatest skill in calf presentation in the showring, David Prinzen took home the trophy as well as trophy for best dairy calf.

Next was the Beef Club Show with its 19 members and their project calves. Jaret Parliament was awarded the Champion Beef Show Person trophy by judge Cassandra Gorrill and Shae-Lyn Bell took home the Reserve in this category with honourable mentions going to Sydney Galt.

To determine the overall Champion Livestock Show Person Award, the winning show person for each of beef and dairy trade animals so that the beef champion is showing a dairy calf and vice versa.

The winner of this highly coveted award was David Prinzen. The Goat and Sheep Clubs Achievement events took place the Sunday of the Fair with judge Stephanie Diamant providing helpful comments to each of the 14 members of both clubs who showed their project animal.

Bell was Champion Show Person for the sheep show with Misha Vader as Reserve Champion.

Both the sheep and goat Champion Show Person was awarded to Bell with Anderson taking home the reserve Champion Award.

The Judging Club held their Achievement event in the form of a judging game which was open to members and the public.

To play the game you had to rank four of the seven classes and give reasons for one.

With a little coaching everyone who played won a milkshake or an ice cream cone from the 4-H milkshake booth.

The Giant Vegetable Club had a weight-off of their projects at the Fair for their Achievement event. The giant pumpkin being admired by club members is seen in the photos weighting in at 312 Kg or 688 lbs.

The Woodworking Club had a beautiful display of their rotating cutlery/utensil caddies. Many had first or second place ribbons attached to the young carpenters pieces.

Even some of their youngest members, Emily and Paige, in the six to eight year old Cloverbuds group participated in the Fair by entering their photos of baby animals in the 4-H photo contest.

Among other Achievement events held was a pot luck supper for the Sophiasburgh Garden Club. Each club member and leader prepared a dish using at least one of the many vegetables, herbs or edible flowers grown in their community garden at Sophiasburgh School. Everyone enjoyed a fabulous, locally grown meal.

The above achievements and clubs that held their events after the Fair such as the STEAM (Science, Technology, Engineering, Arts and Math) Club will all be celebrated at the 4-H Awards night on Nov. 15th.

If you’re interested in joining 4-H as a member, leader or community volunteer, plan to attend their information and registration event Nov. 23rd at the Hope Centre.