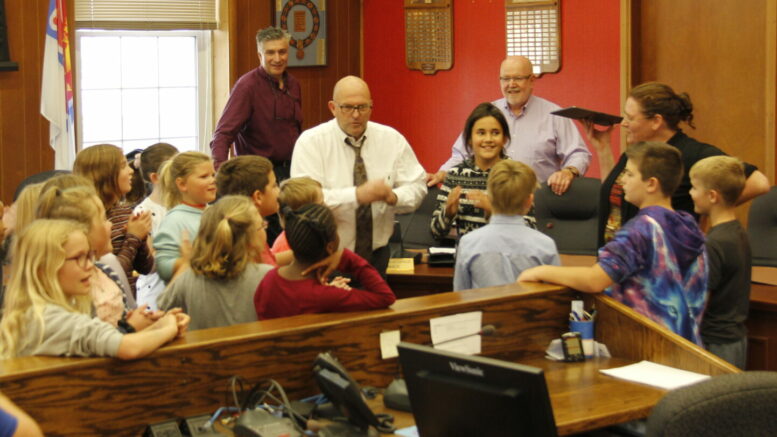 As part of Local Government Week, County Council was party to inspiring deputations from some of the most youthful voices ever to speak at Shire Hall on Thursday.

Madame Dumas and Ms. Marion’s Grade Five cohort from Prince Edward Collegiate Institute (PECI) spoke on how to make Prince Edward County a livable community and how to help mitigate the effects of climate change.

Izzy Norman, a student in Ms. Marion’s class, was first to speak.

“We were told that one of the goals of the council was to prepare for climate change. We came up with some ideas to help the County to do the best job it can to make less of the population…contribute to climate change and protect our land, people, animals and plants,” said Norman.

The class had suggestions for council as to how best to move forward with their climate change mitigation strategies and their suggestions boiled down to three simple, key points: reuse and up-cycle as much as possible, reduce single use plastics, and putting solar panels in some community buildings.

“Many items that people are done with, but still have plenty of life in them, end up in dumps or landfills. Many of these items can be reused for a new life,” implored Norman.

In their suggestions for change, the students focused heavily on community involvement.

“In order to get this started, we suggest having a sharing session with the community.We could have an open talk at the school or in a room here at Shire Hall. We would invite members of the community to come and take part during this discussion,” she said.

Another of Ms. Marion’s students suggested cutting down on single use plastics such as plastic cutlery, water bottles, and a host of other commonly seen culprits. Again, this student offered practical examples of how we can reduce and reuse single use plastics, as opposed to sending them off to, hopefully, be recycled.

Speaking to the issue of renewable energy was Morley Geddes, also from Ms. Marion’s class.

“I would like to suggest putting solar panels in some community buildings, including schools. We believe that would be a much cleaner energy than fossil fuels. This would reduce the carbon footprint of those buildings,” said Geddes.

“We would show examples of communities that had done similar projects, including benefits realized from those projects. We would advertise through posters, have fundraising events and ask for donations from local businesses,” explained Geddes.

The Grade 5 student also explained that they would ask for an audit of the community usage of energy and explain the financial savings, adding that the money saved could be put back into the community finances.

“We hope our ideas were interesting to you and we’ve given you some ideas to discuss and ponder,” the students stated.

Madame Dumas spoke to council as a group, presenting slides and each speaking for about 15 seconds.

The sentiments ranged from adding more charging stations for electric vehicles to facilitating a recycling program for large metal objects and cleaning up the lake.

“We don’t want anymore gas in the air,” one of the students exclaimed.

“We are thinking that people would like to swim in our community, so please clean up the lake,” another student stated.

Students suggested that council avail themselves of opportunities to clean up the community and make it more enjoyable to live, work and play.

“If you want to go play outside,” said one student, “you don’t want to breath in toxins.

Mayor Steve Ferguson congratulated the students on coming to the meeting and encouraged them to continue to be involved with local politics.

“It was terrific you came out today and I’ve got to compliment you on the research and memory work you did,” said Ferguson. “We really appreciate it-listening to your ideas and learning about what you’re interested in. It’s quite an opportunity for you to understand what we do here. I hope in a few years, when elections are called, you’ll understand what levels of government do and you’ll volunteer your time, because it’s very important work.”

Councillor Janice Maynard also applauded the students’ efforts and invoked sentiments heard around the world in the wake of climate strikes and speeches from Greta Thunberg.

“Thank you for your presentation. I just want to say, we are depending on your generation to keep us moving in the right direction. Keep an eye on us,” quipped Maynard, “and make sure we’re fighting climate change together.”

As part of Local Government Week, a week recognized by various municipalities in Ontario, the County encouraged local schools to participate in several learning activities, such as attending council meetings.

“We want to spark a conversation with young and old alike throughout the week and hear what’s important to them as Prince Edward County residents,” said Ferguson.

Included in their visit was a chance to check out the the Prince Edward County Fire/Rescue offices and station on MacSteven Dr.

With files from Desirée Decoste