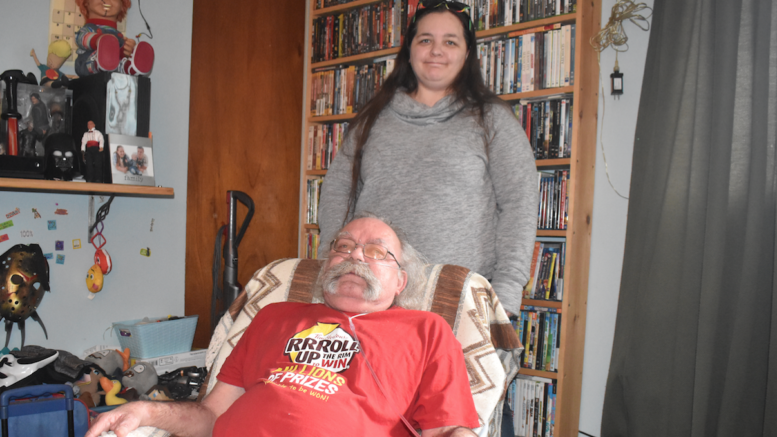 LOOKING FOR HELP- Picton man Brian Snider with his daughter Carrie. Snider is ready for a lung transplant but has no support person to stay in Toronto with him for the three month post-op recovery period. (Jason Parks/Gazette Staff)

Picton resident Brian Snider is a person in peril.

And he’s turning to his community for help because, frankly, he has no one else to ask.

Snider, 63, has lived virtually his entire life in Prince Edward County and is looking for financial  assistance as he is in need of a lung transplant after suffering Chronic Obstructive Pulmonary Disease (COPD) for the last five years.

Snider, who lives with his daughter Carrie and her partner Chris and the couple’s lone son on Washburn St., used to work as a labourer in the canning industry and later found work as a roofer.

It was about five years ago he started to climb up a ladder and realized he couldn’t move.

“I just couldn’t catch my breath,” Snider told the Gazette. “I was finding myself short of breath more and more.”

Afters examinations and scans, doctors delivered the dreaded diagnosis of COPD and Snider’s labouring days were over.

“We are learning a lot everyday about my conditions and how it limits me,” Snider said, adding he’s encouraged by others in his situation.

However, with very limited lung capacity (around 20 per cent), the rehabs sessions are designed to maintain the levels Snider currently lives with.

His only option to extend his life is a lung transplant and times are getting desperate.

A candidate to immediately be put on the transplant waiting list , OHIP will obviously cover the costs of the life saving procedure.

However, a recovery period of at least 90 days in Toronto near Toronto General Hospital where the surgery would take place is required.

That recovery period requires Snider have a support person at his side to ensure he’s taking medications at the right time and to alert healthcare professionals in case of the onset of complications is required.

At this time, Snider has no one to commit to be his support person.

“As soon as I get a support person and have all that in place, I will be considered as on the list and waiting for a lung transplant,” Snider told the Gazette “They need to be on call 24/7 to make sure I’m ok and make sure I attend all my appointments.”

Typically, family members or friends or volunteers would fill this role for someone in Brian’s position.

However, his daughter Carrie, as the lone wage earner in the household, can’t afford to be off work that long.

“I’d do anything to help and support my dad but I just don’t have that option of leaving my job and my child for three months or longer,” she said with emotion.

Brian’s younger brother was set to be his support person but, after a period of time out of the work force, was just hired to go back to work.

“He just can’t leave this job he just got,” Snider said.

The Snider family tried a Go Fund Me account previously and it earned about $800 which Brian put towards medical expenses.

A second one to cover the costs of a support person in Toronto for three months time has started but has only accumulated $40 of a $16,000 goal.

“We’ve approached the provincial government about programs or assistance and there’s not anything out there for us,” Snider said. “We are getting desperate.”

For more information or to assist the Snider family, please visit https://www.gofundme.com/f/help-pay-for-my-support-person?fbclid=IwAR0OVo77PgicIpjskbpPD_-9g92jTVnoo5pt_ufp7NsqA6YKVo0yY3iv2-U