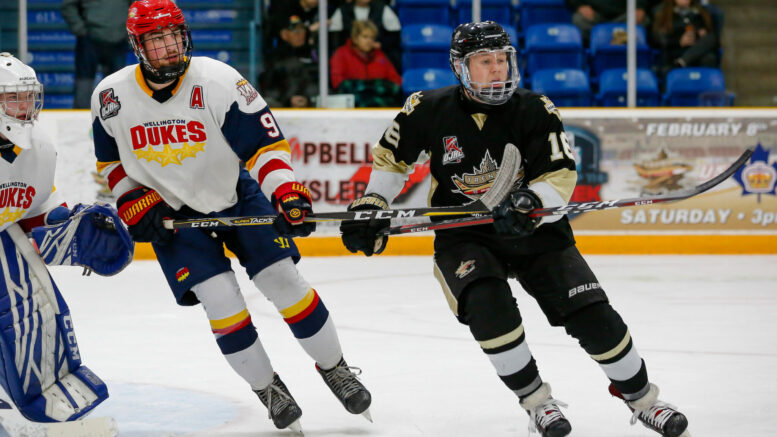 In the end, the third “Battle of Quinte” didn’t quite live up to its advance billing as a massive four point test as the days of October dwindle to a precious few.

And the Wellington Dukes rode the momentum of white washing their arch rivals at the Duncan McDonald Memorial Gardens on Friday to a road win in Mississauga over the Chargers on Saturday.

The pair of victories moved Wellington to a 15-3-1 record, improving their point total to 31 and their winning percentage to a gaudy .813.

After the end of a busy weekend, Wellington finds itself tied with the Toronto Patriots for the overall points lead in the Ontario Junior Hockey League although the Pats have a game in hand.

The Dukes are alone in one portion of the standings and, by virtue of their win in a hotly contested contest with the Trenton Golden Hawks Friday evening, Wellington is clear of the second place Golden Hawks by two points with a pair of games in hand.

Certianly an enviable position to be in almost two full months into the 2019-20 campaign. 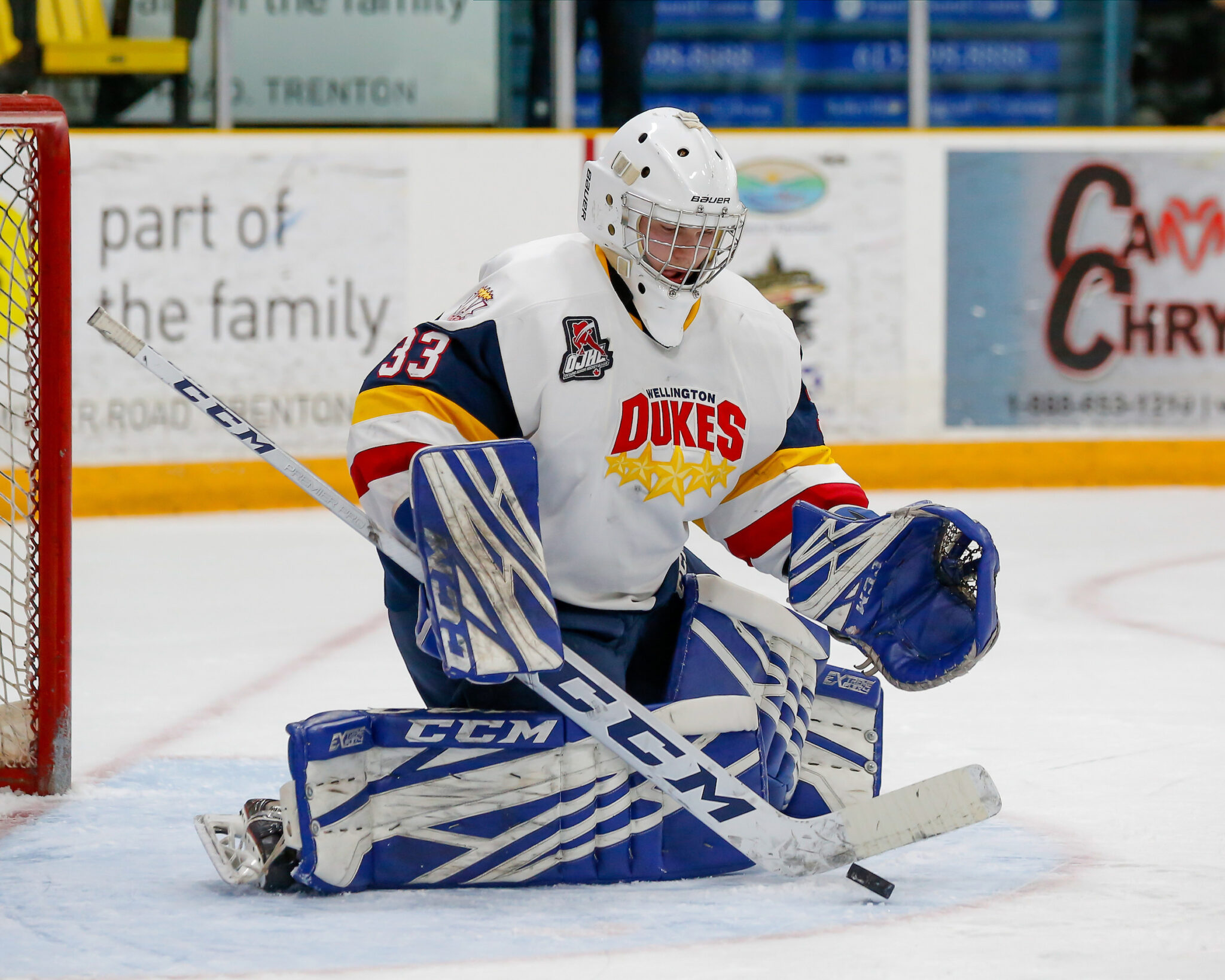 Wellington’s Matthew Dunsmoor makes one of his 32 saves in the Dukes’ 4-0 win over Trenton Friday night.
(Amy Deroche/ OJHL Images)

Wellington came ready to play on Friday night and managed to strike first as Jacob Vreugdenhil converted a Quinn Hanna feed at 14:28 to give the Dukes a 1-0 lead heading into the first intermission.

After getting out shot in the first frame 14-8, Trenton battled harder in the second period and tested Dukes starter Matthew Dunsmoor with more regularity, sending 15 shots his way in middle stanza.

But it was Wellington extending its lead as the dynamic duo of Jake Gagnon and Dylan Massie connected for the local’s second of the contest as the former converted a nice pass by the latter at the 6:22 mark.

The second was particularly testy in the Trenton band box as the teams combined for a multitude of minors and misconducts with Dukes captain Ryan Smith getting booted from the game for a second misconduct during the same stoppage just after the Gagnon goal.

Without the services of their captain, Wellington pressed on to continue to break the hearts of the hosts and the Golden Hawk faithful.

Ben Addison’s power play point blast at 11:24 put the Dukes up three and Gagnon’s second of the game just under two minutes later was the dagger Wellington was looking for to make it a four goal spread.

Dunsmoor would make nine stops in the period and 32 in the game to pick up the Guelph, ON native’s first shutout of the season and first in a Wellington uniform and rub and extra dose of salt into the wounds of the Trenton fans.

The win was Dunsmoor’s eighth of the campaign.

On Saturday, Wellington headed to the historic Port Credit Arena for a contest with the Chargers.

The game was mostly decided in the first as the Dukes roared to a 3-0 lead through 20 minutes.

Ben Woodhouse, Brandon Brazeau and Gagnon all found the range to beat Mississauga starter and former Aurora Tiger Jack Irvine as Wellington fired an incredible 21 volleys on the beleaguered netminder.

The Dukes extended the lead to 4-0 early in the second as Addison scored his second in consecutive contests at the 3:20 mark.

With the goal, the Uxbridge, ON native matched his point total (12) from last season and the smart and agile puck moving defence man has developed into an answer to who might pick up the slack after Zach Uens graduated to the NCAA ranks at the end of last season.

Chase Strychaluk would answer for Mississauga in the eighth minute of the period and would add his second at 14:20 to get the Chargers within shouting distance at 4-2.

The Chargers and Daniil Kuzmin would make it interesting by beating Matt Keeley at the 9:02 mark of the second but that’s as close as the Chargers would come to Wellington on this night.

As they are known to do, Wellington sensed the premlinary stages of a Charger comeback being constructed and the locals quickly dashed any hopes the hosts had of getting even with the Dukes.

Gagnon, who hadn’t scored since Oct. 13 against Whitby (A span of two games that must have felt like an eon for the sniper) took a Hanna pass and beat Irvine just 19 seconds later to put Wellington up 5-3.

Frank Vitucci’s 12th of the season under a minute later would cement it for the locals (if there was any doubt at that stage) and then Barrett Joynt would find a speeding Gagnon for a hat trick effort at 16:19, making the final 7-3. With the hat trick effort Saturday and a pair a night prior, Gagnon moved back into the lead for OJHL snipers with 17 goals, two clear of St. Mike’s Finn Brown.

Kelly earned his seventh win of the season.

After a spate of three road games, Wellington hosts three in a row starting Friday night when they hold their ‘Pink in the Rink’ event, hosting the Cobourg Cougars at 7:30 p.m.

On Sunday, Wellington welcomes the Lindsay Muskies at 1:30 p.m.

LEDES AT LEHIGH: On Monday, Wellington announced they had traded defenceman Luca Marcelitti to the St. Mikes Buzzers for a player development fee…Defenceman Jacob Breckles took a major penalty in the first period of Friday’s game against Trenton and was handed a two game suspension for his trouble. Breckles is eligible to return on Sunday…With 31, Wellington’s Gagnon remains three points behind Oakville’s Harrison Isreals for tops in points in the OJHL.