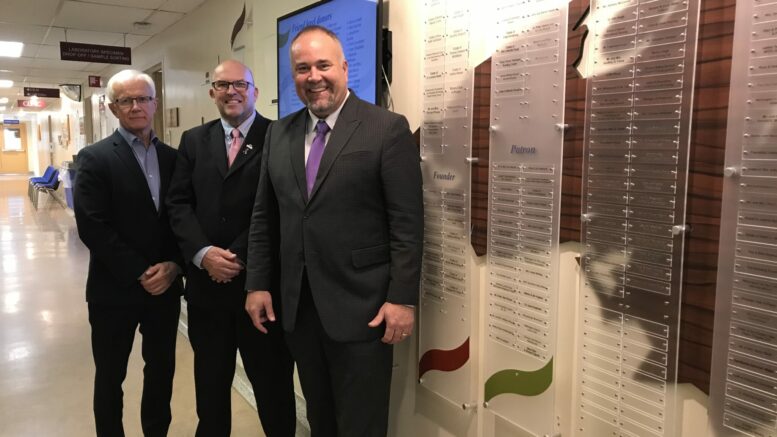 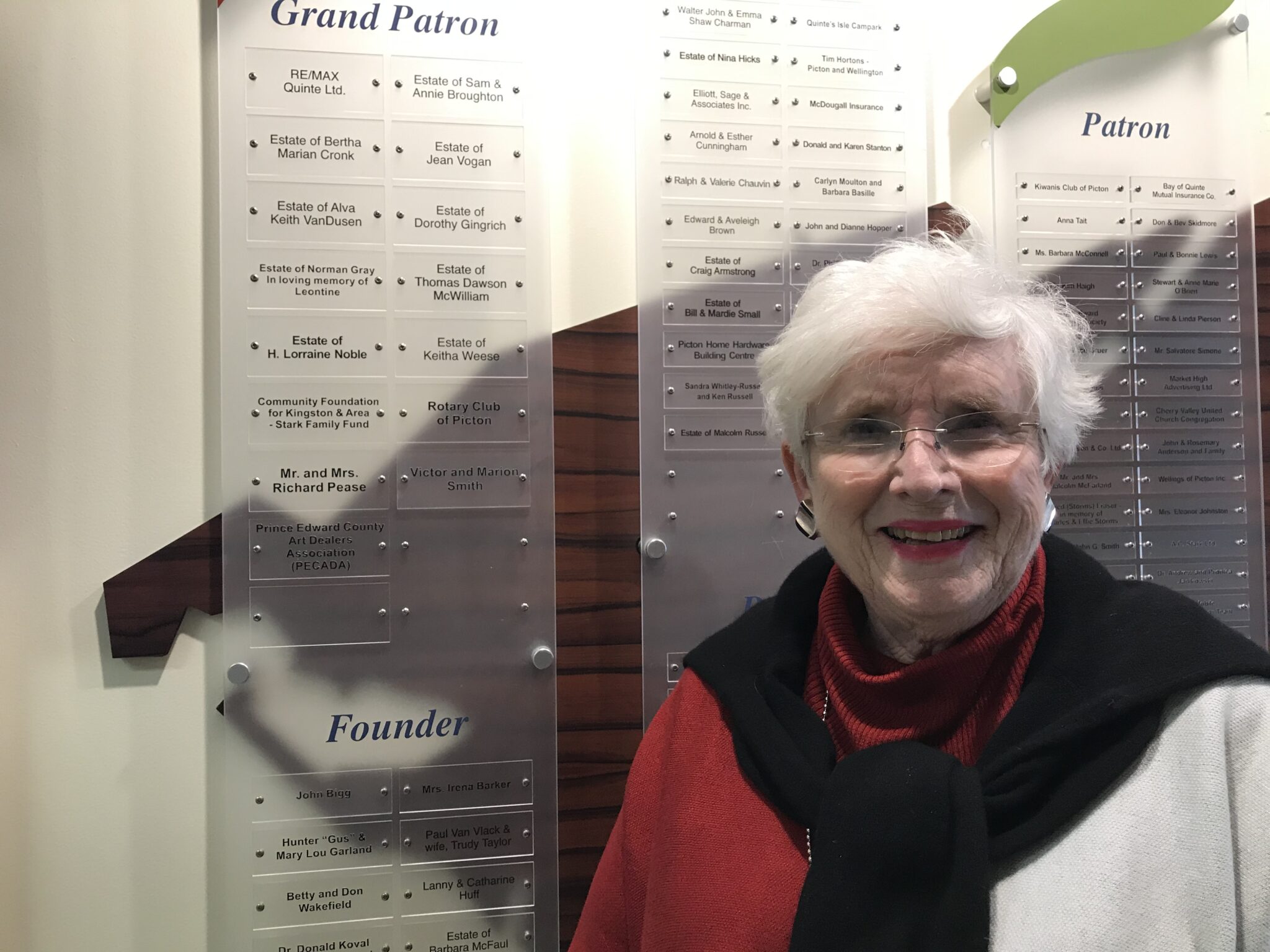 “This unveiling ceremony is an event that honours the generous support of our donors,” said Barbara McConnell, chairperson of the PECM Hospital Foundation. “This is also a celebration of the accomplishment of a community that works together to ensure our doctors, nurses and technologists have access to state-of-the-art equipment to be able to provide care close to home in Prince Edward County.”

The Foundation continues to recognize the many individuals, corporations and community organizations that have been supporting our ongoing fundraising efforts that helps to purchase priority medical equipment at PECMH and help get us closer to a new hospital in Prince Edward County.

Last year’s gifts from donors in the community were used to purchase equipment at PECMH through the Foundation’s ongoing fundraising activities. Equipment purchased for the County hospital included ventilators, infusion pumps and scopes for the regional endoscopy centre located at Prince Edward County Memorial Hospital.  Fundraising also continues for the Back the Build campaign to build a new hospital in Prince Edward County. The project planning partners expect to receive approval to move into Stage 3 of the five-stage planning process at any time.

Medical equipment is expensive and has a short lifespan. Unlike many operating costs, equipment is not funded by the government; it is expected the community finances the replacement of medical equipment and building redevelopment through the work of hospital Foundations. This is why support from our donors is so important. 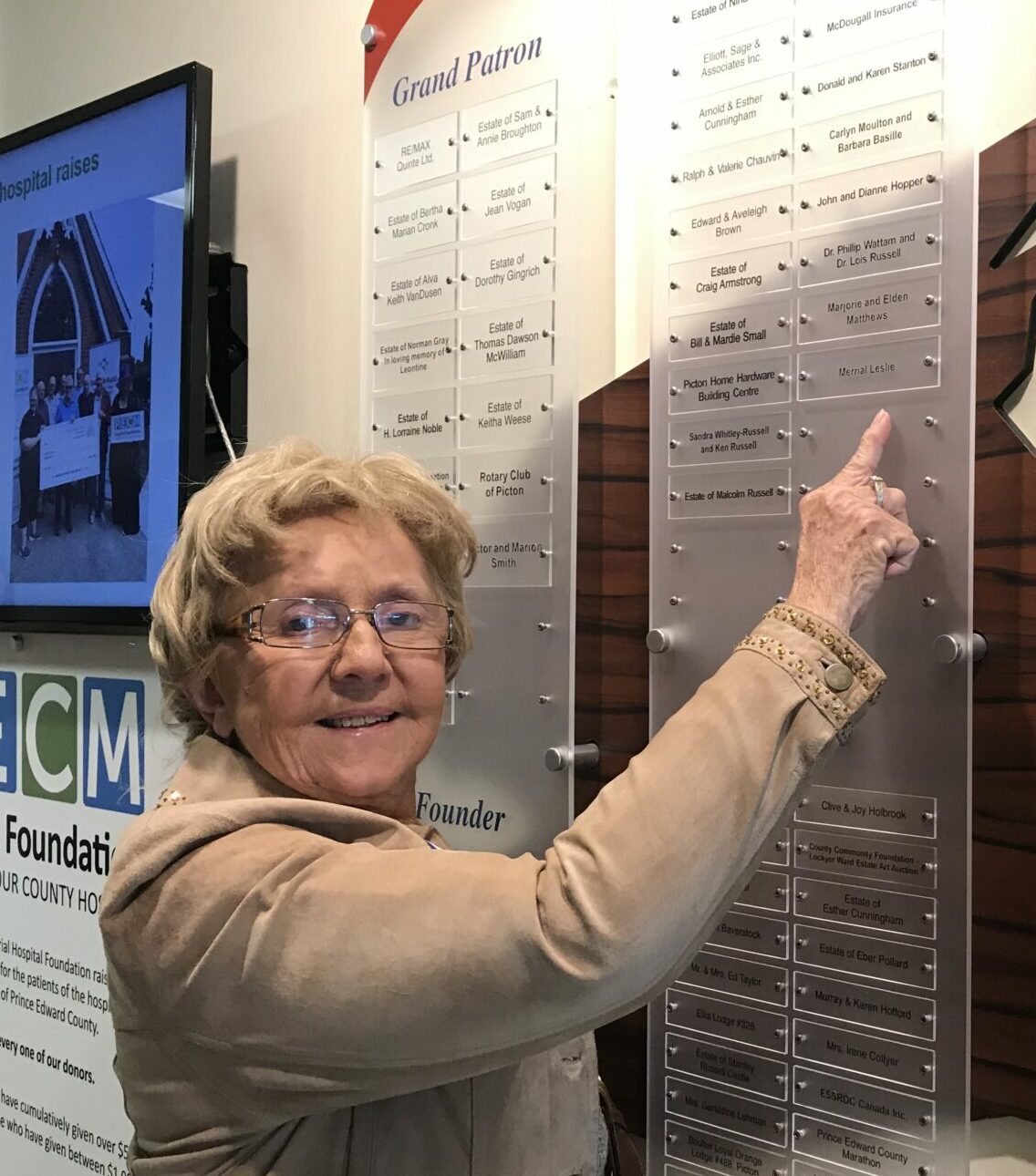 “The enduring and tireless support of our donors for Prince Edward County Memorial Hospital is inspiring.  Every year members of our donor family step forward with gifts that make it possible to replace critically needed medical equipment and helps get us closer to our dream of a new hospital for the County. This year’s donor wall update is exceptional.  I am honoured to be able to thank so many people who are being celebrated here today,” said Shannon Coull, executive director of the Foundation.

Friday’s reception celebrated new donors and those who have moved up in their level of giving. Seventy-four plaques were unveiled on the physical wall and 133 names added to the screen for a total of 207 additions – this is an increase from the last year.

Of note, the Rotary Club of Picton upgraded their giving level from Founder to Grand Patron for cumulative gifts now totaling $107,345. St. Andrew’s Anglican Church in Wellington, Prince Edward County Art Dealers Association (PECADA) and the Prince Edward County Construction Association are making a first time appearance on the wall alongside a plaque placed to honour the memory of Mark Campbell. The funds for this special commemoration were collected through the ‘Cheer for Grampy’ fundraiser held this past winter.

The donor wall pays homage to the geographic beauty of Prince Edward County. It is a lasting way to say thank you to all donors who have given a total of $5,000 or more to the PECMH Foundation. Donors who have cumulatively given between $1,000 and $4,999 since 1999 are recognized on the LED screen built into the wall.

Plaques may be in the names of individuals, families, service organizations or companies. Plaques may also be made in honour of an individual. The donor wall is a lasting legacy and expression of loyalty toward our County hospital, its staff and volunteers.

“Prince Edward County Memorial Hospital thrives with the support of countless County residents. While the donor wall and screen formally recognize and thank those who have reached $1,000 or more in cumulative giving, the Foundation is indebted to many more donors,” Coull stated.

“On behalf of the Board of Directors of the Prince Edward County Memorial Hospital Foundation, I would like to recognize the important contributions by so many that have led to today’s celebration,” said McConnell.