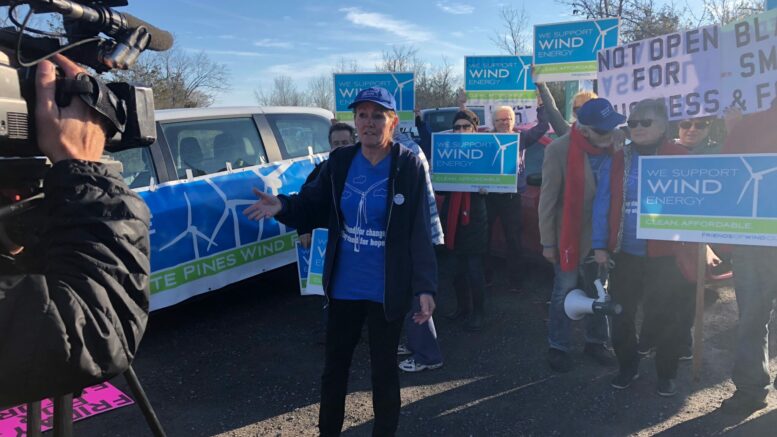 The long and contentious issue of the wpd White Pines wind energy project in Prince Edward County looks to be reaching its final chapter.

But not before local green energy proponents and supporters of the project hosted one more protest, decrying both the provincial and municipal government and those opposed to wind energy for their roles in stopping commercial wind energy in Prince Edward County before a single kilowatt was generated.

On Tuesday as heavy trucks and tractor trailers made their way to a turbine site off Royal Rd. and work on the decommissioning of several of the wpd turbines measuring almost 500’ high commenced, about 50 supporters gathered at the access road for Turbine 9 to voice their disgust at the Ford government for their ominous legislation upon taking control of the Ontario Legislature that essentially negated the Feed-in- Tarrif (FIT) contract between wpd and crown.

It’s expected the cost of negating the contract will be $100 million, money that will come out of the pockets of the Ontario taxpayer.

Turbine 9 Site owner Jen Ackerman was one of the lead organizers of Tuesday’s protest and she told the media that wind energy advocates have tried to explain the value of this form of green energy in the fight against climate change but those impassioned words have fallen on deaf ears in the halls of power in the province.

The wind energy proponent mentioned wind energy supported had gathered a petition with 19,000 names supporting wind energy that was presented to the Ontario government to indifference and that Bay of Quinte MPP Todd  Smith was invited to the protest Tuesday to reassure those in attendance that there was no Climate emergency happening.”

As the trucks rolled off Royal Rd. and down the access lane to reclaim turbines and blades and take them to unknown destinations, Ackerman said she was looking at this dreaded day with mixed emotions. 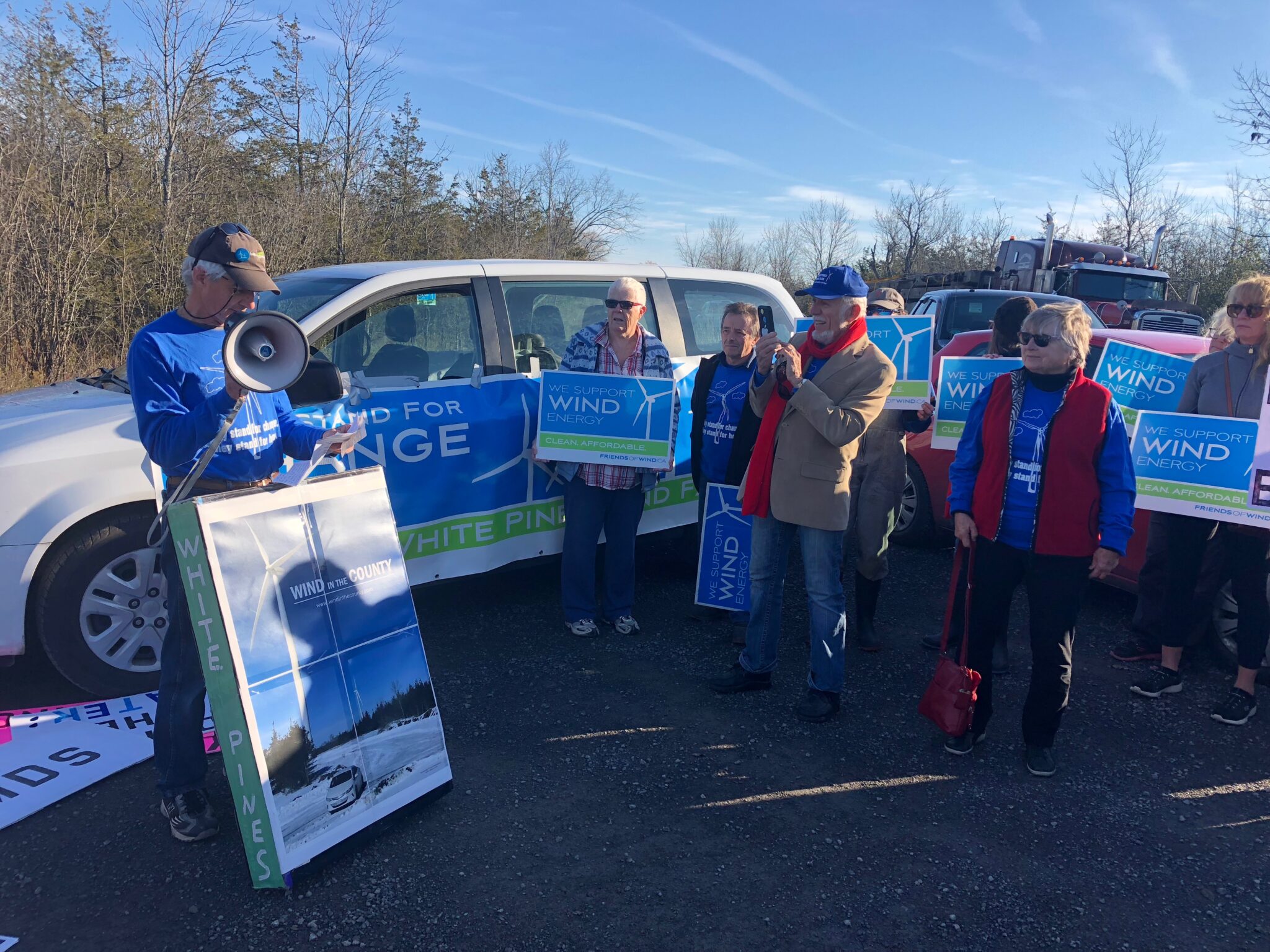 Don Ross of the County Sustainability Group speaks to protesters as a tractor trailer rumbles along Royal Rd. as part of the turbine decommissioning efforts. (Jason Parks/Gazette Staff)

“I’ve gained a huge group of friends and supporters and wee are moving forward to do advocate in the future,” Ackerman said. “When this all started, I didn’t realize how many people supported green energy. If there’s something positive, I’ve made some fantastic friend and connected with a lot of people and I feel inspired for the future.”

Don Ross of the County Sustainability Group offered words to the assembled protestors before they visited a pair of turbine sites later on Tuesday.

“Our wind resources here are the best in the province. Instead of being known as a 21st Century leader in wind energy for Ontario, we will be known forever as the first place in the world to tear down a wind farm. This shame will never go away and will remain long after these magnificent turbines are gone,” Ross said.

Ross said Prince Edward County’s new motto should be come to “Where the status quo thrives and where hope for change comes to die” and that those opposing the wpd project will be firmly entrenched on the wrong side of history.

If not for a vindictive provincial government, Ross surmised  the supporters might have gathered such as the scene Tuesday to celebrate the first kilowatts being produced and fed into the Ontario power grid.

“Instead, we are now witness to its destruction at huge environmental and financial cost,” Ross added.

On the other side of the issue, the Alliance to Protect Prince Edward County (APPEC) said in a statement they were welcoming the recent preparation for the dismantling of the wind turbines of the wpd but “Some concerns remain.” 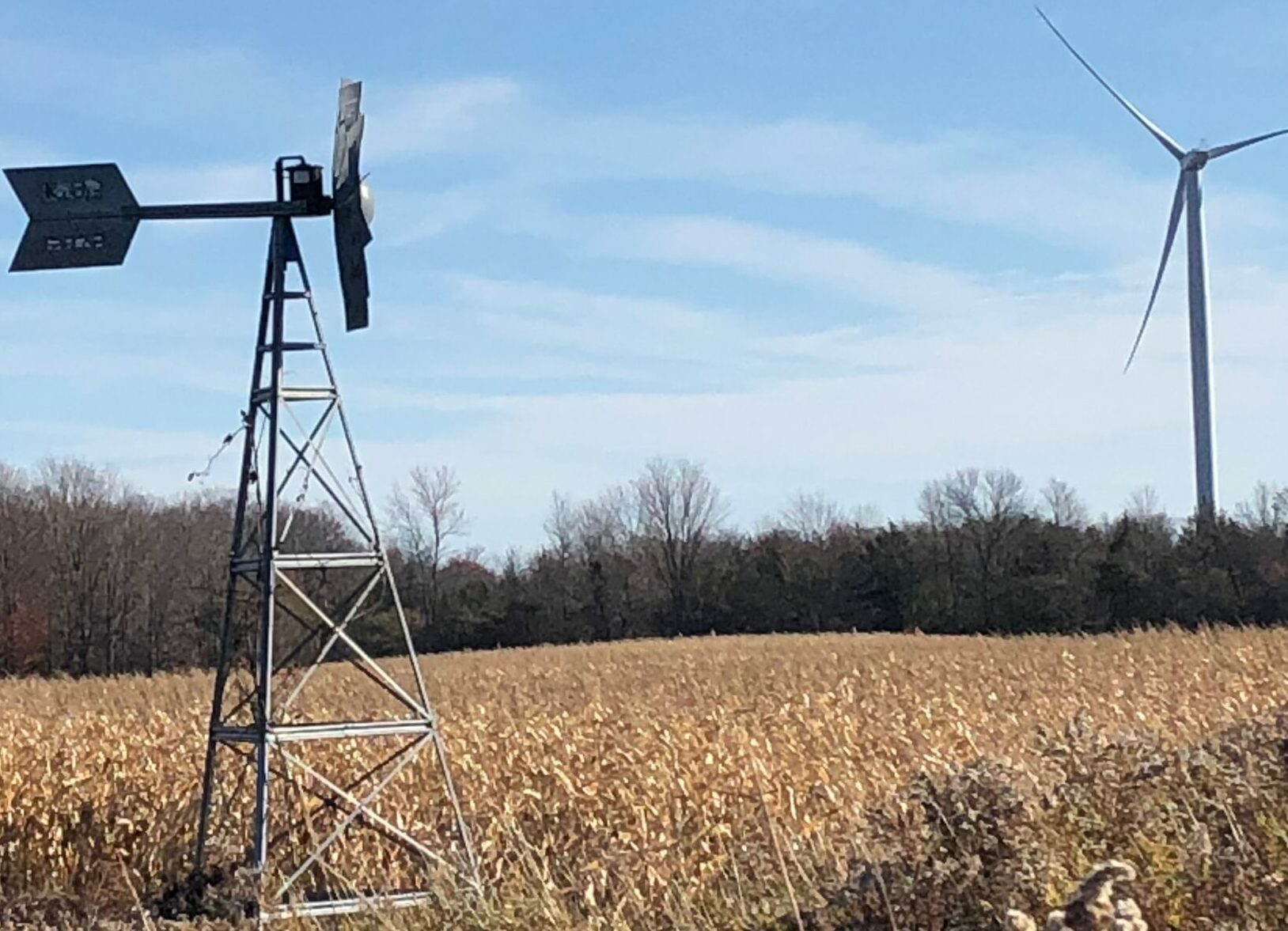 “The community opposed this project for many years,” APPEC spokesperson Orville Walsh said. “A vote conducted locally had over 90% against the project. The reasons for the opposition included concerns about the negative impact on human health, the natural environment, the cultural environment, and doubts concerning the value of wind energy.”

APPEC Believes that preventing the operation of the turbines will eliminate the harm to human health, as well as harm to local and migratory birds and bats and their dismantling and removal will also mitigate the negative impacts on the cultural environment.

“The cancellation of the project and repurposing of the turbines will save the electricity ratepayers of Ontario significantly in the coming years and extensive solar renewable energy facilities exist within Prince Edward County. There are five large (10MW each) ground-mounted solar sites and numerous smaller ground and rooftop installations,” their statement added.

APPEC added one major area of concern remains as the decommission takes place and that is the lasting impact of the project infrastructure on a threatened species, the Blanding’s turtle.

The group explained two separate Environmental Review Tribunals, one for this project and another for a nearby wind energy project, dealt directly with this issue. These tribunals found that the roads built or upgraded for the projects would cause serious and irreversible harm to the local Blanding’s turtle population. This harm is created not just from increased road mortality but also increased predation and poaching.”

Orville said APPEC was “Urging wpd to do all they can do to protect this threatened species by removing the acknowledged threats and restoring the area to its original condition.”

Workers at the site indicated that each turbine might take up to 10 days to dismantle completely but those time frames were based, ironically,  on wind.

As the westerly gusts picked up Tuesday morning, the unnamed worker said not much work can be accomplished “On days like today.”